(JWR) --- (http://www.jewishworldreview.com) IN THE NEW COMIC MOVIE FABLE "Blast From the Past," Adam Webber (Brendan Fraser) is born in 1962 in a nuclear fallout shelter during the Cuban Missile Crisis and raised there on traditional values and Perry Como records. Thirty-five years later he resurfaces, a courtly and sincere man-child lost amid the squalor and moral void of contemporary Los Angeles.

The movie's premise could serve as a metaphor for Hollywood, where traditional sensibilities went underground sometime during the Kennedy administration and have only recently begun to reappear, however tentatively. Indeed, it may serve as a symbol of a broader cultural reflorescence of traditional attitudes and behaviors. 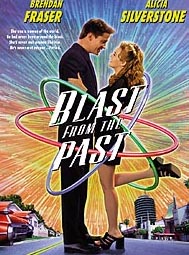 The over-interpreted Lewinsky scandal is the great counter-indicator of the moment. Despite conservative fears that Clinton's acquittal signals the belated final triumph of the experimental, expressive-individualist values of the `60s counterculture, most measurements indicate a broad yearning to restore much of the moral consensus shattered in the `60s.

After alarmingly steep rises in the `60s and `70s, illegitimacy, teen births, premarital sex, abortions, divorce and crime are all headed downward in the `90s. By large and consistent majorities, Americans cite moral decline near the top of their list of national problems in polls.

Such trends prompted The American Enterprise magazine to ask "Is America Turning a Corner?" on a recent cover. If Hollywood is turning a corner toward more sympathetic treatments of traditional ideals and social roles, perhaps it began with 1994's "Forrest Gump." While Gump's innocence permitted him to weather the convulsive social changes of the `60s, the woman he loved immersed herself in the era's protest politics and cultural experimentalism, and was ultimately destroyed by them.

Last year, Steven Spielberg symbolically reconciled World War II vet fathers and their draft-deferred Boomer sons in "Saving Private Ryan." And "One True Thing," based on an Anna Quindlen novel, offered a sympathetic reappraisal of the traditional homemaker role, a departure from years of movies which preached that fulfillment for women lay mainly outside the home.

Raised amid the moral confusion and family disintegration of recent decades, today's teens and young adults seem especially tempted by the security and stability of American life before the sexual and pharmacological experiments of the `60s. The movie that showed the greatest awareness of this generational temptation was director Gary Ross' "Pleasantville." This is a little odd, because "Pleasantville" warned teens against idealizing American suburbia in the `50s, which it imagined as a superficially chipper but essentially repressive universe peopled by ignorant sitcom characters.

"Blast From the Past," with its young stars Brendan Fraser and Alicia Silverstone, explicitly identifies itself with this new receptivity to an older moral sense among the young. When a plane crashes into the Webber house during the Cuban Missile Crisis, the brilliant but barmy Calvin Webber (Christopher Walken) thinks it's the long-awaited Big One. A Cold War paranoiac, he withdraws with his wife Helen (Sissy Spacek) into the elaborate underground shelter he has designed and stocked with enough food and supplies to last his family 35 years, the half-life of radioactive fallout.

There, Adam is born and raised -- in isolation from the influence of peers, progressive education and the popular culture of the last 35 years. Unlike his cohorts on the surface, Adam is intellectually and morally shaped almost exclusively by his parents. He is home-schooled in boxing, baseball and French by his father. His mother teaches him dancing and manners. He grows into a guileless, emotionally unguarded adult who can't quite visualize a force play at second base, but understands that a gentleman makes those around him feel comfortable.

At 35, Adam is sent to the surface to bring back supplies and, if possible, a wife, from Pasadena. Nineties L.A. is a nihilistic urban dystopia (as exaggerated in its way as "Pleasantville"'s authoritarian `50s-era suburban dystopia), and Adam is utterly lost until he finds his Beatrice in Eve (Silverstone), a jaded, street-wise survivor.

In a world where attachments are superficial and transitory, being cool and noncommittal is the supreme value, whether avoiding marriage or nightclubbing. "Look unimpressed," Eve and Troy, her gay roommate, instruct Adam on entering one club. In Adam's moral universe, in contrast, even the outward forms of social life express a moral purpose. Manners are a way of showing respect for others, he explains to Troy, who had assumed they were a way of "acting superior."

In Hugh Wilson's refreshing script, being a square is not only estimable, but even seductive to the opposite sex, especially if, like Adam, the square he is speaking perfectly the French and dances a mean jitterbug.

On Valentine's weekend, the president himself pinned his wife -- and promised to be forever true. Makes you wonder: Is anyone immune from the yearning to recover our lost innocence?

Ben Wattenberg is a senior fellow at the American Enterprise Institute and is the moderator of PBS's "Think Tank." Daniel Wattenberg, who wrote this week's column, writes regularly for The Weekly Standard and is a contributing editor for George.