Who's afraid of the Euro?

(JWR) --- (http://www.jewishworldreview.com) CONSIDER "EUROLAND," HOME OF THE EURO, the highly publicized and controversial new currency for 11 member nations of the Euro-zone of the European Union. Is it good for Europe? Is it good for America? It's good for both.

But Europhoria aside, the hot new currency will not extract Europeans from the deep ditch they are in, which has no parallel in all history, and from which there is no apparent ready exit.

I salute the Euro. I can live with it even if it becomes "a competitor to the dollar," and I could live with that even if I understood what it means. 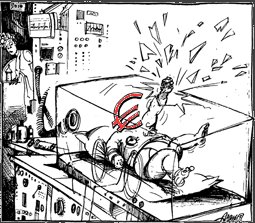 But I do know that Euroland sits in Europe, one of the preeminent blood-stained land masses of the world, and now the site of one of the great and hopeful stories of our time. For centuries the ancestors of today's Eurolanders had an ugly habit of regularly killing each other. A common coin may well encourage further unity, diminishing any chance of renewed violent behavior. Ongoing peace is good for America, period.

But a further case is made --- that Euroland will become a major competitor to the United States. Why? Principally because of wealth and size.

But the reported size of Euroland is, at root, highly misleading. It is said that the new bloc, with 292 million people "is larger than the United States" with 278 million people.

The United Nations has just published the 1998 edition of World Population Prospects, one of the great demographic reference works. At my request, the U.N. Population Division did a special run for the aggregate of the 11 nations of the Euro-zone.

The Total Fertility Rate (TFR) in Euroland -- that is, the average number of children born per woman over the course of her child-bearing years -- is 1.38. That is incredibly low, lower by far for a large group of countries than anything the world has seen since the advent of serious statistics. Moreover, the rate has declined for more than 30 years and has declined in the 1990s.

The "magic number" in demography is 2.1, which is the "replacement rate." Why 2.1? If two parents aren't replaced by two children, plus.1 of a child to account for children who don't survive to their own reproductive years, then, absent immigration, a population shrinks, and shrinks, -- in a geometric downward spiral.

The current TFR for Euroland is 34 percent below the replacement rate. This means population loss. Within 10 years (2005-2010), Euroland will be losing numbers.

The population projection for Euroland in 2050, based on constant rates, is 240 million, 18 percent less than now, and spinning further downward.

By contrast the American TFR in 2000 is estimated at 1.93 children per woman -- below replacement, but not by much -- and 40 percent higher than Euroland. We take in about a million net immigrants per year. That yields a population of 372 million by 2050. So: American population moves from slightly less than Euroland's today (-5 percent) to substantially more (+54 percent).

The key point is not that the American market will be bigger than Euroland's. Even 240 million people is substantial, particularly when they are wealthy.

Many decades ago, the premier French demographer Alfred Sauvy glumly and famously predicted that Europe would become a continent of "old people in old houses with old ideas." He could have added, "with few young people to pay their pensions or take care of them."

There are two plausible solutions. One is mass emigration from Africa, both Saharan and sub-Saharan -- that is, young blacks and Arabs tending to, and paying taxes for, old Europeans. The other is a solid increase in European fertility.

Unlike pluralist America, modern European nations have not been built on immigration. Even in America, attitudes toward foreigners are often harsh. In Europe, they are far harsher. It would be sad to see turmoil return to a continent seeking well-deserved stability.

Trying to increase fertility is a modern dilemma, with no apparent easy fix.