Sum of scandal? It's OK

Granted, I tend to look at the happier side of things. But isn't it possible that this scandal -- however it is finally adjudicated -- will prove to be good for America? After all, isn't that what a lot of smart people now say about Watergate? Didn't it show that in America no man, even the President, is above the law? Now that the case of Clinton v. The Law is in the hands of the putative adults of the U.S. Senate, we can speculate about the upshot of it all.

Much has been made of the debasement of the public dialogue. We are told: Think of the children. Aren't our children learning that they can lie? After all, if a President can lie and get away with it, why can't they? And whoever thought that "oral sex" would be on the evening news?

(And if the kids read the Starr Report on the ‘Net it gets gamier than that.)

But the President isn't going to get away with it, True enough, if Clinton is not removed from office, he and his serial spinners will likely play the martyr card, whining their way through history: It was a partisan lynch mob, it was a vast right wing conspiracy, it came from rats who were really just against his wonderful progressive policies. 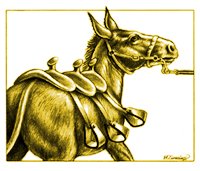 But the Democrats on the House Judiciary Committee, Clinton's most loyal supporters, have already endorsed a censure resolution that states, "William Jefferson Clinton... through his actions has violated the trust of the American people, lessened their esteem for the office of the President, and dishonored the office which they have entrusted him with."

Dishonored -- that's from Democrats. He has been impeached by the House of Representatives. All 100 Senators have now said the House's case rises to a level worthy of a serious trial. There are not very many Americans who don't think that Clinton lied under oath and acted like a reckless jerk, if not worse.

Unless a kid is already a reckless jerk, he or she is not likely to take this aspect of the Clinton Presidency as an appropriate model of behavior. And -- eek! -- oral sex, and lots more, were already quite familiar to many young Americans. It's civics they don't know enough about, and this has been a vast national learning experience about government and the law.

Clinton's allies have also been punished. How would you like to be a feminist leader forced now to endorse the ugly essence of Clinton's legal case? Which is this: Monica was merely a service provider on a house call.

This is a feminist position?

What else? It was first said that the case did not rise to the level of impeachment. Now it is said that it doesn't rise to the level of conviction. That it will take America toward a parliamentary form of government. That impeachment will no longer be something to be used only once per century. That it's nothing but the politics of personal destruction, pursued by crazed right-wing Republicans. That it will become a normal way of doing business! Lowering the bah yields a coup d'etat!

Hold on. If that happens historians will look to see when it began. Try 1974, when Richard Nixon was forced to resign under threat of impeachment and conviction. In roseate retrospect Watergate was a high-minded bipartisan exercise.

In reality, for most of its course it was a bitter partisan affair whose goal was to remove a President who was elected by one of the largest majorities in American history (61 percent) and who, by the way, was hated by many Democrats.

Add it all up. What's the problem? That the Presidency will be a less great office if future White House occupants know in advance that they'd better not use it in unseemly or criminal ways? That when in doubt the Congress will follow the Constitution? That the law grinds slowly, but finely? That a President in personal trouble doesn't cause a stock market tumble?

That the U.S. Senate can (at least) start a process without public rancor?

That Republican politicians, like Henry Hyde, can act against the public opinion polls when they think principle is at stake? That Democratic politicians, like Robert Byrd and Joe Lieberman, can scald a Democratic President? That a Presidential misdeed can be somewhat lower than Watergate and still be big trouble?

I'd rather have what we have, and what we'll get, than have had nothing at