AT 4 P.M. ON ELECTION DAY, after some ups and downs, the Dow Jones Industrial Average closed for the day at 8706 --- unchanged.

Twenty-four hours later, notwithstanding a stronger than expected Democratic showing, the politics of America closed for the next two years --- unchanged.

The Democrats netted five House seats, they didn't lose any seats in the Senate, they netted out even among the governors. They are entitled to a modest victory dance --- in the endzone. 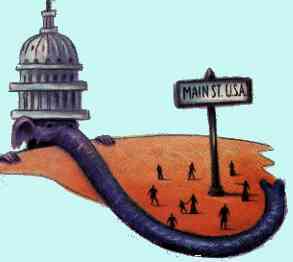 Pundits are in trouble, and pollsters are in bigger trouble.

Of all the many battalions of talking heads, working mostly off of polling data, about 0.1 percent said the Democrats would pick up seats in the House. (I salute myself for announcing that no one really knew what was going to happen.) The polling industry is in a ditch. The telephone response rate to pollsters is way down. What would you expect when telemarketers peddling credit cards keep calling during dinner? It's not much better with exit polls. They do not include a sample of voters casting absentee ballots, whose numbers have grown enormously since the passage of Motor Voter legislation and now include about 2 million voters in California. This situation can render suspect many interpretations of the election results. (For example, how might the turnout numbers look if African Americans voted heavily in person, but only minimally by absentee?)

The pundits' principal error lay in not paying proper attention to the substantial vagaries of the off-year election idea. Yes, the party not in control of the White House tends to win in those years. But that often happens because in the previous election the victorious President had some coattails, bringing in some extra congressmen. But Clinton won in 1996 with only 49 percent of the vote, without coattails. The off-year and pro-Republican interpretation was much over-stated. (Remember, in the Spring, the Democrats were saying they could win back the House.)

Money is very important in politics, but not all-important. Democrats were way behind in money, yet did well. California Governor-elect Gray Davis, the big winner of the most important election in the country, won the Democratic primary, big-time, beating two candidates who vastly out-spent him.

Minnesota Governor-elect Jesse Ventura, the solid winner of the most enjoyable election in the country, was vastly out-spent by his two major party competitors. The close re-election of Sen. Russell Feingold in Wisconsin presents an interesting case. He vigorously favors campaign finance reform because the current situation skews the playing field. But he won despite having less money to spend than his opponent.

The Republicans ought to hire James Carville to learn how to run a rapid-response war room. Attacks on Republicans as racists were incendiary, combustible, wrong, malicious -- and barely countered by the GOP. (Bring us together, Mr. President.)

The conventional wisdom seems both correct and contradictory about several things. The Republican don't-make-waves defensive strategy did not work well. Running out the clock may work in football but not in elections. Conservatives complain that the GOP had no national conservative theme. Sounds right.

But it is also correct that the superstars of the election were Republican candidates for governors, who won with big margins, and ran as inclusive, moderate, problem-solving pragmatists. Sounds right.

That image was particularly apparent with the elections of "the Bush Boys." Governor-elect Jeb Bush in Florida won solidly. His brother, the re-elected Governor of Texas, George W. Bush, not only won with a 40-point spread, but pulled in a Republican Lieutenant Governor. That makes it politically easier for GWB to run for President in 2000. Go figure.

The big change is not for now but for the election in 2000. Before Tuesday there were two plausible scenarios: 1. that the GOP would sweep in 2000, winning the Congress and the Presidency, or 2. that America would continue to have divided government in the new century. Now, with closer than expected margins in Congress, we should add 3. that the Democrats, like the Republicans, could conceivably win a sweep of the Presidency and the Congress. Thus, there's a two out of three chance that the results of the 2000 election will not be characterized as ---