The Jerk Factor at work

GENEVA, SWITZERLAND -- To an amateur at big time finance (me), two intertwined themes, one quite surprising, emerged here about the roiling nature of international business: It works despite jerks. (I rhyme; no crime.)

It does work. The consensus at the recent International Chamber of Commerce meeting was: Take a deep breath. The hurricane sweeping through financial markets of so-called emerging nations will blow away, sooner or later. And -- flash! -- it will have either a greater or lesser effect on America and Europe!

Most important and more seriously, the forces of globalization and resurgent capitalism are here to stay, and are good, which I believe. 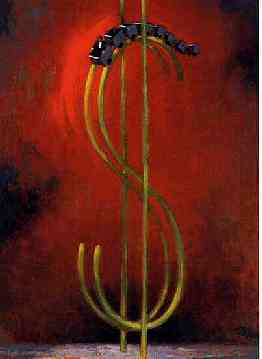 Helmut O. Maucher, the President of the ICC and Chairman of Nestle, presided. He told the audience of businessmen, bureaucrats, bankers, brokers and bull-slingers that for companies looking toward the medium term or long term this was the right time to pursue direct investment in battered places. I believe that, too.

But there is a Jerk Factor to contend with, even if it is hard to pin down precisely. It has played a big role in the current mess. Under current policies, it would be naive to suggest that what we have now won't come back. With some incremental reform -- which is all that is likely -- we may hope only that it will play itself out in the future in a less malign form. It all might be laughable were it not for that third of the world's population that is deeply scarred by the current situation.

Now, I do not purport to be a financial expert. I do not write about hot money, cold money and crawling pegs. But I think I can spot a jerk as well as the next guy. And so can you.

Consider bankers. The world's greatest oxymoron may now be "prudent banker." When a banker in an emerging country looks out his window and sees new office buildings and new condos, without many tenants, and then loans big money to real estate developers for yet one more office building and yet one more condo -- that banker may be properly classified as a jerk. And just what would you call a banker in Europe or a hedge-fund operator in America who pumps billions into the hands of those high rollers?

Consider the financial wizards and Nobel Prize-winning economists who teamed up to run the now-ravaged Long-Term Capital Ltd. hedge fund. Among other shrewd plays, these geniuses invested billions of highly leveraged dollars in Russian bonds. The bonds are backed by one of the most volatile governments in the world, and the high leverage means that small swings in price can wipe out a position. How to describe such wizards? It is easy to trot out the J-word.

Not quite so simple. Were these high flyers encouraged to act irresponsibly and foolishly? After all, the international financial community -- including the International Monetary Fund, the U.S. Treasury, the Fed and consortia of big banks, both foreign and domestic -- often provides soft-landings for firms and nations deemed "too big to fail." Big losses are often cushioned -- although not eliminated -- through loans, bailouts and generous buy-outs.

Accordingly, by lessening the risks of buccaneering buck-rakers, are these responsible financial organizations only guaranteeing that a new generation of Junior Js will be coming along? And how then should the responsible financial organizations be described? As irresponsible? After the New York Fed helped put together a bailout of LTC, the straight-shooting former chairman of the Fed, Paul Volcker, asked acidly, "Why should the weight of the federal government be brought to bear to help a private investor?" (After all, a committee of bankruptcy creditors would not necessarily wildly dump the depreciated securities, thereby causing global chaos.)

The biggest surprise, I confess, is that I am surprised by all this. After all, there are plenty of self-deluded jerks in the world, including some politicians, social scientists, economists and lots of just plain people. But I thought, somehow, that people making all that money, investing all that money that wasn't theirs, talking in such big words, with all the discipline of the market in place, couldn't be, wouldn't be, dare not be, first class dopes. Alas, that makes me a dope, too.

Live and learn. The remedies of choice put forth in the Geneva meeting were logical ones. Principally, there needs to be more "transparency" in the financial markets. Investors need to know more of what's going on. That, in turn, should break up much of the "crony capitalism," an uptown phrase for welfare for the rich and tragedy for the poor. Appropriately, the goal is to fix the free market, by making it yet more free.


Ben Wattenberg is a senior fellow at the American Enterprise Institute and is the moderator of PBS's "Think Tank." Daniel Wattenberg, who wrote this week's column, writes regularly for The Weekly Standard and is a contributing editor for George.