Perhaps never have so many known so little about so much. First, experts said Democrats could regain control of the House of Representatives. Then, after Ken Starr's sizzling report appeared, experts said the Republican "base" was "energized," which would help the GOP win solidly in the House, perhaps getting the 60 senators needed for a "filibuster-proof" Senate. 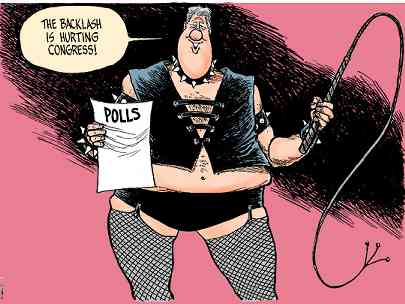 Then, after President Houdini's videotaped testimony was played, a "backlash" against Republi-porn was sighted, showing Democrats energized. Now, experts say Clinton won the battle of the budget, yielding momentum. (Quick, what did he win?)

What's up? The nine latest so-called "generic" surveys, all taken in early to mid-October, show that among likely voters Democrats are in this position: +3 percent, +2 percent, +2 percent, +1 percent, +4 percent, -8 percent, -9 percent, -2 percent and dead even. The managing editor of the Gallup Poll should know what's up. "Democratic interest surged over the last two weeks, where Republican interest stayed the same..." Lydia Saad said recently, "(but) Republican voters are now showing more partisan loyalty than Democrats, with party support rates very similar to 1994."

But in 1994, Republicans got 53.5 percent of the two-party vote and gained 52 House seats, even though many polls had showed Democrats ahead. That tilt is normal: The Republican vote is often understated in generic polls. Simply put, a sample of a mythical national election cannot give an accurate view of 435 separate local House races, where critical contests often swing on laser-thin margins.

This year there's an extra joker in the deck: Clinton's possible impeachment. Will Republicans turn out to show Clinton the door? (Some polls do show that "moral values" are the number one issue.) Or will Democrats turn out to protect him? No one knows. The surveys show only a small minority who say their view of Clinton will affect their vote, and those are split roughly evenly pro and con. But the surveys don't tell whether these are voters who would have voted that way anyway.

The spinning will continue after the election. Democrats are already hyping the so-called "six year itch." That is, the party of a two-term President loses big in the election held during his sixth year in office -- an average of 26 seats. Anything better allegedly "beats expectations."

But the itch law comes mostly from the records of Presidents who won second-term landslides, like Franklin Roosevelt, Eisenhower, Nixon and Reagan. As the saying goes: "The ferry brings in the garbage," the garbage being congresspersons who won only with Presidential help, and subsequently lost without it. But Clinton didn't win big in 1996; he only got 49 percent. He has little congressional garbage to lose in 1998, and Democrats have little basis to cite the itch.

Republicans have their own spin: Clinton won't be able to govern because he's been a bad boy. But the President has the Constitution on his side.

Thus, the recent budget negotiations were between 228 House Republicans and 55 Senate Republicans versus just one President, who had just one veto pen. What's at stake? Not much in terms of change. Beneath the partisan hubbub, both sides properly brag about the budget surplus, reduced welfare rolls and lower crime rates. These are not issues Democrats used to boast about. The terrain upon which Americans play politics has changed, for the better.

And so it will likely remain. If the Republicans win -- the status quo remains. Even reaching "filibuster-proof" levels won't likely mean much -- the President still retains veto power. If Democrats win the House, the GOP would continue to hold the Senate, a fine mechanism to foil any serious liberal moves.

Most experts, notwithstanding lack of data, are predicting mild gains for the Republicans in the House and mild-to-moderate-gains in the Senate. That's likely. The healthy economy should help incumbents, mostly Republicans. The GOP has more money. And in non-Presidential year elections, voters see their vote for Governor as the most important one they cast.

Seventy-three percent of the population lives in states with Republican governors, and some GOP re-election landslides are in the making: Bush in Texas, Pataki in New York, Engler in Michigan, Ridge in Pennsylvania. They may bring in some congressional garbage.

If you're looking for big change, one way or the other, wait till 2000.