IF ALL-NEWS CABLE TELEVISION produced a program about your family's Thanksgiving dinner, it would isolate the generational conflicts, simmering sibling rivalries and uncomfortable in-laws.

The guy with the microphone and the hair would probably lead the news with, "Mom's mad; she thinks she's being taken for granted." Lost would be the enduring ties of kinship, mutual gratitude and love that transcend petty discord.

It does seem easier now than ever to grow demoralized about ourselves as a nation. Seen through the viewfinder of a 24-hour combat zone mediaverse, we come across as ethnically and racially balkanized, ideologically and politically polarized, religiously intolerant, suspicious of outsiders, estranged from each other and from the public square. 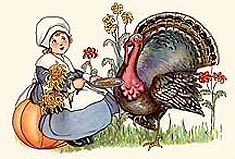 But it's not true. Perhaps more important: It never was.

An eye-opening new study of American parents with children in public school reminds us that Americans have a lot in common and, as the survey's title has it, A Lot To Be Thankful For. The survey was taken by mainstream Public Agenda, originally founded in 1975 by former Secretary of State Cyrus Vance and social scientist Daniel Yankelovich, who remains its President.

The pollsters were in the field in September, amidst the swirl of the divisive Clinton scandal.

Maybe you have heard that we have withdrawn into cynicism? But:

And yet this patriotism is not a truculent Love-It-or-Leave-It nationalism. Nor is it a kitschy, ignorant boosterism. It's a warts-and-all patriotism.

Large majorities said, for example, that the government sometimes lies to the public, minorities are often treated unfairly, and we are too materialistic.

Worried about a new reign of religious zealotry? Relax. Yes, most Americans believe in G-d and attend religious services at much higher rates than other Western democracies. But, as attached as we are to our own religious beliefs, we are even more attached to our belief in religious tolerance.

Given a list of ideals and asked to characterize them, 89 percent of parents said it was "absolutely essential" that "everyone should have the right to their religious beliefs." That finished in first place. The Pilgrims, who sailed to the New World to escape the religious intolerance of the Old, would understand.

Pessimists on the left brood about systemic racism and chauvinistic rejection of "the Other." Pessimists on the right fret that American national identity is threatened by a rising tide of non-European immigration and "multicultural" education that amounts to a catalog of minority grievances.

Both groups should check their sampling techniques. By large majorities, all the parents both celebrate our diversity -- and want Americans welded into a whole that cherishes its shared history, values and freedoms.

Parents agree (62 percent) that mostly "today's immigrants come to the U.S. ... and become loyal Americans." "The US is unique," said one Dayton mom. "We are all a bunch of mutts here." There ought to be a slogan: How about "E Pluribus Unum"?

American parents also agree that in the past, "the schools unfairly overlooked the contribution that minorities made to U.S. history" (73 percent). At the same time, 80 percent of the parents agreed that kids should learn ethnic and racial pride "at home" and "what it means to be an American" at school (African-American: 81 percent; Hispanic: 81 percent; immigrant: 80 percent.) Almost 9 in 10 parents (88 percent) agreed that schools should make a "special effort to teach new immigrants about American values and beliefs" (immigrant: 87 percent!).

Parents don't want their children indoctrinated with sugar-coated historical myth, but they are determined that our failings be kept in historical perspective. Overall, 59 percent would be upset/somewhat-upset by a teacher emphasizing that the U.S. mistreated minority groups like African-Americans and Native Americans throughout its history. African-American parents would be more upset (68 percent) than white parents (59 percent).

Above all, one thing bothers American parents today: "Too many of today's youngsters fail to appreciate how good this country is" (91 percent).

Well, you may say, sure, no wonder people are upbeat nowadays: It's the Goldilocks economy, lower crime, less welfare and so on. But the crucial little secret of public opinion research is that America shows plenty of continuity along with change. Even during Vietnam, crime waves, inflation, recession, stagflation, Watergate, the decade of greed and the turbulent Sixties -- Americans were high on America. Very high. Says Yankelovich: "The survey shows that, with all the change, the core values of classical American exceptionalism are alive and well."

Given the timelessness of these feelings there ought to be a holiday. We could call it


Ben Wattenberg is a senior fellow at the American Enterprise Institute and is the moderator of PBS's "Think Tank." He wrote this column together with his son, Daniel, a regular writer for The Weekly Standard and a contributing editor for George.