ALACK. SHAKESPEARE HAS NOT HAD A VERY GOOD CULTURE WAR.

Of course, given the way he is read by fashionable literary theorists in today's academy, the Bard might be better off dead than read.

For example, Harold Bloom, author of the new Shakespeare: The Invention of the Human,recently received a letter from Anthony Hecht, poet and retired Georgetown professor, telling of a Georgetown professor teaching Romeo and Juliet who "tells the students that Juliet and her nurse are having a lesbian affair." 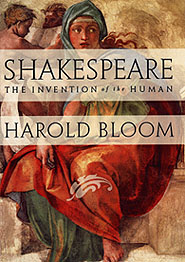 But maybe, just maybe, the tide is beginning to turn. The Duke University English Department -- exemplar of the academic nouvelle cuisine in the humanities (feminist criticism, pop culture, Queer Studies -- chicks, flicks, and...) -- is "self-destructing," according to a recent New York Times article. An external review team "found the department 'without anything we would be disposed to describe as an undergraduate or graduate curriculum.'" Under "something resembling receivership," the department is being led by a botanist who specializes in plant respiration, until a new chairman is found.

And Bloom's magisterial new book on the Bard is itself an implicit and valuable answer to the reductivist literary theorists of the academic left. Like the great Shakespearean critics Samuel Johnson, William Hazlitt and A.C. Bradley, Bloom reads Shakespeare from the inside out. "Immerse yourself in the text and its speakers, and allow your understanding to move outward from what you read, hear and see to whatever contexts suggest themselves as relevant," he writes.

He contrasts his traditional approach with that of the now fashionable historicists and social determinists. The latter method is "to begin with a political stance all your own... and then to locate some marginal bit of English Renaissance social history that seems to support your stance," he writes. "Social fragment in hand, you move in from outside on the poor play, and find some connection, however established, between your supposed social fact and Shakespeare's words." Outside-in. Or, as we non-academic critics say, ass-backwards.

Bloom sees fatal flaws in the historicist or determinist approach. For one thing, it's absurd. Yes, Shakespeare -- and his largely forgotten contemporaries like Thomas Middleton, George Chapman and Thomas Dekker -- were all in some sense influenced by the social conditions of Elizabethan England. Therefore, Middleton, Chapman and Dekker were all in some sense... like Shakespeare? Certainly not in the sense they might have wished. "Individual genius disappears completely" in this approach, said Bloom in an interview. "Originality is destroyed."

Another big problem: the determinist approach is... arrogant. Shakespeare, Bloom maintains, is not just the Western tradition's greatest poet, but its greatest thinker also. He had our ideas before we did. Indeed, we have them because he had them first.

The book's boldest and most distinctive argument is that Shakespeare invented us. The greatest Shakespearean characters, he holds, did not merely represent existing states of consciousness; they embodied new ones created first by Shakespeare. In particular, they embodied a new self-awareness.

Because of their self-awareness, they were able to "reconceive" themselves and, thus, change themselves by acts of will. Literary characters and people underwent change before Shakespeare -- but these were understood as mere changes of fortune precipitated by forces outside themselves -- disease, aging, the caprice of the Gods. Shakespeare creates the first characters that are the authors of their selves, and in their image were born the first fully individual, fully human beings.

Bloom's book was #12 on the New York Times bestseller list last week and has sold, he says, 101,000 copies in five weeks. And it is the kind of classic study apt to remain in print and sell for a long time. Who reads the Marxist and feminist critics? "Nobody," answers Bloom. "They sell three or four thousand copies, when they sell well, mostly to librarians and to one another."

But Bloom remains deeply pessimistic about the survival prospects for true literary scholarship in the academy. As long as the academic tenure system survives, he says, "these covens and sects can propagate themselves, choose their own kind and only their own kind as graduate students, new assistant professors and people promoted to tenure."

Maybe. But if Shakespeare can invent the human, surely someone can invent an alternative to tenure. Let's hope so. Because if we're left with English departments that don't need Shakespeare, then who needs English


Ben Wattenberg is a senior fellow at the American Enterprise Institute and is the moderator of PBS's "Think Tank." He wrote this column together with his son, Daniel, a regular writer for The Weekly Standard and a contributing editor for George.