WASHINGTON -- Covering the president these days means never having to say you saw him.

That's an old joke, but for the reporters following Bill Clinton, it has never been so true. 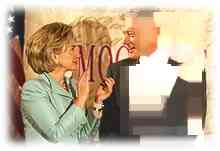 The comparison to just a few months ago is striking:

In January, four events happened in rapid fire order: The Monica Lewinsky story broke, Clinton denied having had sexual relations with her, he gave his State of the Union speech, and the next day, he traveled to Champaign, Ill., where more than 20,000 people gave him a hero's welcome that was so enthusiastic it surprised even the White House.

"It's like Elvis," a stunned senior White House adviser said that day. Clinton followed up that trip with large public rallies in Wisconsin and New Mexico, where he gave speech after speech to huge, adoring crowds.

But that was when Clinton was saying he was innocent. Now that he has admitted guilt, Elvis has left the building.

This is especially notable considering congressional elections are just days away.

Today, he goes almost exclusively to private homes and hotel ballrooms where the crowds are made up of Democrats contributors who have plunked down thousands of dollars to be there.

There are three theories to explain the change: First, while Democratic candidates are glad to have the money Clinton raises from fat cats, they do not want a tainted president addressing ordinary voters on their behalf.

Second, the president wants to avoid large rallies where he is almost sure to be confronted with hecklers.

Third, there is the White House view: Rallies take lots of money and lots of time to organize, and while the president has a large staff to handle the multitude of details, the local candidates do not. And therefore, big rallies are out.

But this does not explain why Clinton has stepped even farther out of the public eye by avoiding the reporters who travel with him.

Clinton travels with a large press corps of newspaper, TV, radio and newsmagazine reporters as well as an army of photographers (all of whom pay their own way, incidentally).

On occasion in the past, Clinton has appeared in locations where accommodating the entire press corps would be too disruptive -- a hospital, for instance -- and so a pool made up of about a dozen journalists attends and shares information with the rest of the press corps.

But even that has been eliminated. Last Saturday, for example, Clinton traveled to Los Angeles, held three private fund-raisers and excluded even the press pool from all three events.

The White House allowed only a single newspaper reporter inside each event to witness what the president was doing and saying.

So, for most of the reporters traveling with Clinton, this was a day in which they flew 3,000 miles and never saw him. Instead, they sat in an overheated basement meeting room in a hotel and listened to his remarks over a loudspeaker.

In the past, reporters flying on Air Force One got to see Clinton because he would go back to the press area and talk to them. But this doesn't happen anymore.

I flew on Air Force One Saturday, and all I got to see was the in-flight movie ("The Last Days of Disco" no less).

I did get to ask Barry Toiv, the deputy press secretary, why the White House could not accommodate the entire press corps or even the much smaller press pool at the Los Angeles events.

"These events are in private residences," he replied.

True, but these private residences were in Beverly Hills and Bel Air, some of them on estates almost large enough to have their own zip codes.

What's the big deal about not seeing the president live and in person?

One misses certain things. What, for instance, was the expression on President Clinton's face when Barbra Streisand introduced him by saying that the American people "have elected him twice to be their president, not to be their pope"?

Don't ask me. I was in an overheated meeting room miles away.

By keeping reporters and crowds far away, Clinton can keep unpleasant confrontations far away, but there is a trade-off: Clinton has always loved working the rope lines and meeting ordinary voters. He has always said he draws strength his crowds.

Now, the crowds are gone, and when White House spokesman Joe Lockhart was asked why on Monday, he said: "It's not productive ... days before the election, to come in and have (candidates) put up with all that disruption a presidential visit causes."

It used to be called