THERE HAS BEEN A FLURRY OF COMMENTS on the incredibly low level of knowledge revealed by a recent test of applicants for jobs as teachers in Massachusetts. However, what is even more important than what these applicants lack intellectually is how dangerous such people are in our classrooms.

Why are dumb teachers dangerous? Because nature abhors a vacuum. If teachers' minds are not filled with knowledge and understanding, they will be filled with other things -- the kinds of things that appeal to shallow minds. 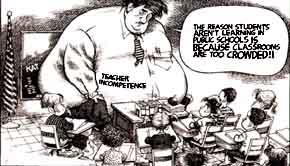 That is why our schools are so full of fads, psychobabble and amateurish attempts at social engineering. Much of this stuff is just silly but much of it is also dangerous to the students and to the whole society.

Take "trust-building" exercises, for example. All too typical of this kind of activity were a group of blindfolded teenagers that I saw in Yosemite, holding on to one another and being led through the woods by an adult, who was simply beaming at his own role in this activity. There are many other varieties of trust-building activities indulged in on school grounds or elsewhere.

There is probably no more dangerous period of life than adolescence. All the dedicated efforts that have gone into raising a child to that point and all the deepest hopes that these efforts will pay off in future years can be destroyed overnight in adolescence by an unwanted pregnancy, drugs or any of the many other ill-advised adventures that adolescents have gotten into.

Yet here are our taxpayer-supported schools teaching adolescents to rely on similarly inexperienced teenagers around them for guidance and to emancipate themselves from the knowledge and experience that their parents and other adults have acquired -- often painfully -- before them.

Shallow teachers, who are the least likely to grasp the huge dangers in promoting such attitudes, are also the most likely to be attracted to such non-academic novelties.

The systematic undermining of morality that used to be called "values clarification" is still going on in our public schools under other labels, now that parents and critics have caught on to what "values clarification" really means. It means reducing moral principles to mere subjective feelings, as if there were no social or intellectual processes through which experience tests notions against realities.

The "non-judgmental" nature of much of the classroom social engineering that goes on is consistent with this emphasis on feelings, on diaries and on other devices that put personal feelings on the same plane as tested knowledge and tested moral principles that enable a society to function.

It is hardly surprising that a steady diet of this kind of mush leads many children to think that cheating is all right, as a recent survey showed, or leads some children to think it is OK to start shooting people they don't like, whether at school or at home, as tragic events at schools around the country have shown.

However surprising the Massachusetts test results may have been to some people, what should be even more revealing is that this was the first time such a test had been used to screen applicants for jobs as teachers in that state. In other words, these incompetents would have sailed right through in previous years and spent a lifetime in Massachusetts classrooms, spreading their ignorance and confusion to children.

In many other states, tests for teachers have existed longer than in Massachusetts but often these tests are so easy to pass that they are meaningless. The political clout of teachers' unions ensures that these tests will remain easy.

We hear a lot of talk about "artificial intelligence" being created by computers but a far more important issue is artificial stupidity being created and spread to students by teachers who abandon academics in favor of glittering social theories.

The neglect of hard knowledge and the failure to develop intellectual qualities in students is just part of the high price of allowing shallow people to set the norms in our public schools. Dumbness is dangerous. And tenured dumbness is doubly