Missing the point in the media

WHETHER ON TV OR IN PRINT, media pundits have developed an almost unbelievable ability to miss the point. If you judged by what they say, you would think that the most important issue of the day was the fate of the relative handful of people who are in politics.

Analysis after analysis tries to show how this or that episode is going to affect the Republicans or the Democrats in the next election. Media deep thinkers tell us how events will impact on the political ambitions of Newt Gingrich or Al Gore, how the 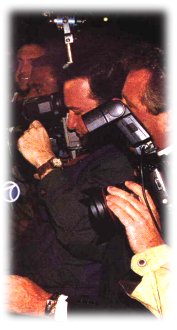 public's image of Kenneth Starr might be affected or whether Bill Clinton's poll ratings will hold up.

All the politicians in Washington, the whole Republican and Democratic parties nationally and all the bureaucrats and judges put together add up to only a tiny fraction

The question to ask about immigration is not whether it is an issue that will help Republicans or Democrats, but what are the pros and cons of letting the present mass inflow continue or putting particular kinds of restrictions on it. Since immigration involves irreversible changes that can affect generations yet unborn, what it means as a political issue in the Congressional election of 1998 or the presidential election of 2000 is small potatoes by comparison.

Tax issues are likewise seen by the media in the narrowest possible terms. To the pundits, it is just a question of which group will gain and which will lose -- and what that means to the Republican or Democratic "base."

Principles of right and wrong vanish into thin air. No one seems to care whether people who have already paid taxes on their money when they earned it should have it taxed again when they die and leave it to their children or a spouse. Nor do the effects of taxes on the economy as a whole seem to interest the media.

Nowhere is this preoccupation with individual politicians and parties more distracting and misleading than in the current media frenzy over the investigation of White House scandals.

By contrast, the charges against the President of the United States can have enduring consequences for our country and our whole form of government, if they are true. Moreover, the consequences will be with us long after the present occupants of the White House are gone.

If the most powerful office in the land can be used to commit and cover up crimes, to buy off witnesses and ruin those who cannot be bought off, to intimidate Congress itself with threats of releasing raw FBI files about its members, then we will no longer have the kind of government created by the Constitution. We will have the kind of corrupt despotism that has plagued too many other countries throughout history and contributed to their downfall.

President Clinton began abusing his power from the moment he took office. His unprecedented firing of all U.S. attorneys in 1993, including those investigating his Whitewater dealings, set back that investigation, just as his later ignoring of subpoenas and other stalling tactics have frustrated and mocked the law for years. Yet the media want the special prosecutor to hurry up and close the investigation.

The White House's flouting of the law continued when Clinton aides spent hours ransacking Vincent Foster's office on the night of his death, despite notices from law enforcement officials to leave things as is until they arrived. The later mass amnesia among these aides when they were called before Congress was in sharp contrast to the vivid memories of F.B.I. agents, not to mention a secret service agent in the White House who testified under oath that he saw records being removed from Foster's office.

This all happened before either Kenneth Starr or Monica Lewinsky appeared on the scene. Worst of all, this kind of thing will continue to happen in future administrations if this one gets away with it. This is what media pundits are missing while they chatter about "the president's private sex