A RECENT thought-provoking television special on race, hosted by young black talk-show host Larry Elder, made me think back to World War II and to what might seem like an 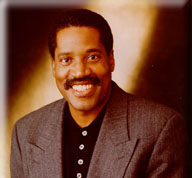 As a teenager then, I noticed that there was a Billy Mitchell bomber and a Billy Mitchell airfield, so naturally I wondered who this man was. When I looked him up in the library, I discovered that, when Billy Mitchell was alive, he was court-martialed for saying the very things for which he was now being honored.

Larry Elder is currently being vilified and threatened, and his sponsors are being boycotted, because he is one of a growing number of "black conservatives" who do not march in step with the racial party line, as laid down by the likes of Jesse Jackson and Louis Farrakhan. However, it is only a matter of time before Elder, Clarence Thomas and others are vindicated. Moreover, they are young enough that it can happen within their own lifetimes.

The truth has a way of coming out in the long run, even when it is drowned out at first. Billy Mitchell did not convince people that he was right, events proved that he was right. He said that planes could sink a battleship but many did not believe him until Japanese bombers sank four American battleships at Pearl Harbor.

Today, blacks like Larry Elder are only beginning to make their influence felt. But they don't have to do the whole job. Events are starting to back them up.

The handwriting is on the wall that affirmative action is on its way out, that welfare as a way of life is in retreat, and that there is not going to be any national apology for slavery, much less reparations. Talk about the "root causes" of crime is dying out, even among liberals, and the shift is toward more cops and more prisons.

As a lady in a cartoon said to her hippy-looking husband, who was strumming a guitar and singing a sixties song: "Knock it off! The sixties are over. For God sake, the seventies and eighties are over!"

No matter how many times re-runs of civil rights marchers at Selma are shown on TV, that is over. It is as much history as the landing of American troops on the beaches at Normandy. It was a great thing for those troops to have stormed the beaches -- but there is not a single problem in the world today that is going to be solved by landing more American troops at Normandy.

The race hustlers can still get a lot of mileage out of staging protest marches in the name of "civil rights," but this is not going to benefit anybody but themselves. Jesse Jackson can still shake down corporations who are worried about their image, and "diversity consultants" can still make big bucks out of loudmouth harangues on campus or in the corporate suites. But none of that is going to help the kid growing up in Harlem or Watts.

Despite many advances, a kid growing up where I lived in Harlem half a century ago has less chance of escaping from poverty today than I did. The big difference is that I received a solid education in the public schools of that era and these schools can barely maintain order today, much less educate the students.

Naturally, it is presented in a much prettier way than this to the public. But the bottom line is that a place has to be found for any teacher, no matter how incompetent, and the more incompetent they are the more likely they are to end up teaching in the ghetto, because middle-class parents tend to drive out such teachers and tenure makes it too hard to fire them.

Meanwhile, black "leaders" who are ready to go ballistic over any stupid remark that could be construed as racist remain very silent while the education of a whole generation of young blacks is destroyed and their future with it. That is why people like Larry Elder in Los Angeles, Ken Hamblin in Denver and growing numbers of other black conservative talk-show hosts across the country are needed to blow the whistle on what is really happening.

They are not likely to be any more popular than Billy Mitchell was with the army's top brass. But, with a new century looming ahead, it is time to leave the 1960s behind and start dealing with today's problems and tomorrow's