IT IS AMAZING how many people, including media pundits, fail to ask the most obvious question about various claims of presidential privilege: Does any such privilege actually exist? If so, where?

Instead, there is a lot of back-and-forth about whether secret service agents, for example, should be required to testify about President Clinton and Monica Lewinsky. But the law is bigger than either of these people. It has been around longer and the optimists among us can hope that it will still be around for our children and grandchildren. 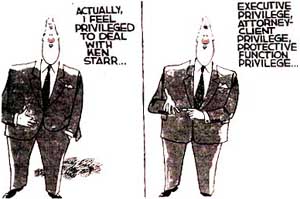 On the other hand, if the existing law gives no secret service privilege, then the agents in Clinton's White House are no different from any other citizens who have no right to withhold information from a grand jury.

In short, what the law is at this moment should not be a big issue and all the arguments back and forth about what the law should be are irrelevant.

What is scary is how many people have so little grasp of what the rule of law is -- and how important it is for all of us -- that they think the law means whatever they feel it ought to mean.

If we don't like existing law, we have the democratic right to change it for the future -- but not retroactively. That would destroy the whole concept of law.

If we are thinking about changing the law for dealing with future presidents and their secret service agents, then the arguments that are irrelevant to Clinton would become relevant for that very different purpose.

Fortunately, in more than two hundred years of having presidents, we have never before had a president testifying in a criminal case, so there has been no occasion for secret service agents to be subpoenaed to find out if a president committed perjury in his testimony. After Clinton is gone, we may not descend to that level again, so the whole issue could become moot.

If, however, a new privilege is created out of thin air by the courts, then it is virtually certain that some future president or presidents will descend to that same level again. If you do not understand the enormous dangers from abuses of power, then you do not understand why the Constitution of the United States was written the way it was.

It would have been far better if this issue had never arisen because we do not want to box in future presidents or -- worse yet -- create immunities to laws. A president who cared about the institution of the presidency, or about the country as a whole, would not have put us in the bind that we are in now. But there are many things that Clinton would not have done if he were that kind of president.

White House spin-masters and their media allies are determined to portray this as an issue about the president's private sex life. When you try to get a witness to commit perjury to protect the president, that is a major crime, regardless of what the perjury is about.

It is not what Monica Lewinsky did or didn't do with Clinton that is the issue. The issue is whether she tried to get Linda Tripp to commit a felony -- thereby committing a felony herself.

Monica Lewinsky's father has protested that his daughter is being used as a pawn by special prosecutor Kenneth Starr. She was used as a pawn, all right, but by whoever sent her out on a mission to tamper with a witness.

If prosecutors aren't supposed to prosecute people who commit crimes, then why are we paying them? Why are they appointed in the first place?

The law is not the Oprah Winfrey show or Geraldo Live. It is not a question of giving vent to our emotions. Most of us would probably not like to see Monica Lewinsky go to jail. It is doubtful whether Kenneth Starr really wants to put her behind bars.