FEW THINGS DEVELOP AS FAST as technological change in the computer industry. And few things are as slow as antitrust cases. So an antitrust case against a computer software company like Microsoft is about as big a combination of opposites as you can find.

Five years is breakneck speed for completion of a major antitrust case and it is not unknown for a decade or more to elapse before the appellate courts say the last word on one of these cases. Five years is at least two generations when it comes to computers. A decade ago, laptops were a novelty of the rich. 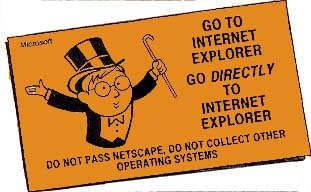 The idea of slowing down innovation in the computer industry to the glacial pace of the legal system is grotesque. Yet that is what the Justice Department's Antitrust Division tried to do when it asked the courts to stop the recent introduction of Microsoft's new Windows 98 operating system until the legal fine points could be argued out.

Antitrust law is so full of ambiguous phrases, mushy concepts and elusive definitions that it cannot really be considered law. Laws are supposed to tell you in advance what you can and cannot do, not just allow government officials to nail you when they don't like what you are doing or want you to do it their way.

Antitrust cases can involve years of wrangling in the courts and many millions of dollars in legal fees, even when the plain facts of the case are not in serious dispute. That is because the terms used have no clear and consistent meaning. Microsoft is accused of being a "monopoly" that uses its "power" to prevent rival software producers from being able to compete. The Justice Department claims to be trying to protect "competition" by reining in Microsoft's ability to exclude other companies' software from its Windows operating system.

Let's begin at square one: Is Microsoft a "monopoly"? By the plain dictionary definition -- one seller -- it is not. Apple computers have a different operating system, for example. By an economic concept of monopoly -- a firm able to prevent other firms from engaging in the same activity -- it is likewise not a monopoly.

In antitrust law, however, numbers and percentages can be used to claim that a particular company "controls" a certain share of the existing market. If that share is very high, then the firm may be considered to be a rough equivalent of a monopoly.

Slippery words like "controls" insinuate what can seldom be plainly stated and proved. If a high percentage of the customers buy your product, that statistic after the fact does not prove that you controlled anything before the fact.

Those same customers can change their minds tomorrow and you will be history. That is why Microsoft keeps updating its operating system and adding new features. If it really controlled its market, it could relax and let the good times roll, instead of constantly scrambling to stay ahead of its rivals and potential rivals.

While the Justice Department's Antitrust Division claims to be trying to protect "competition," it is in fact trying to protect competitors. Competition, like monopoly, is a set of conditions in the market. It cannot be reduced to an outcome like percentages of sales.

There is competition in boxing when the champion agrees to fight the leading challenger -- even if the champ knocks him out in the first round. Competition is about a set of initial conditions, not about outcomes.

The Antitrust Division wants to prescribe outcomes by asking the courts to force Microsoft to include rival Netscape's Internet software in its own Windows system. Some in the media have spread the disinformation that Microsoft makes it impossible to put non-Microsoft software in its system or on the Windows screen.

My own computer came with non-Microsoft software, including Netscape, on the Windows 95 screen -- and I didn't even order Netscape. The computer manufacturer put it there. Moreover, Windows is set up so that the consumer can easily install all sorts of other software. Why some media people don't bother to check out the simplest facts is beyond me.

Some media pundits have been calling Microsoft founder Bill Gates "arrogant" for dismissing the Justice Department's arguments as nonsense. But Gates' real problem may be that he is not a lawyer, and so does not realize that much nonsense is already an established part of antitrust law and