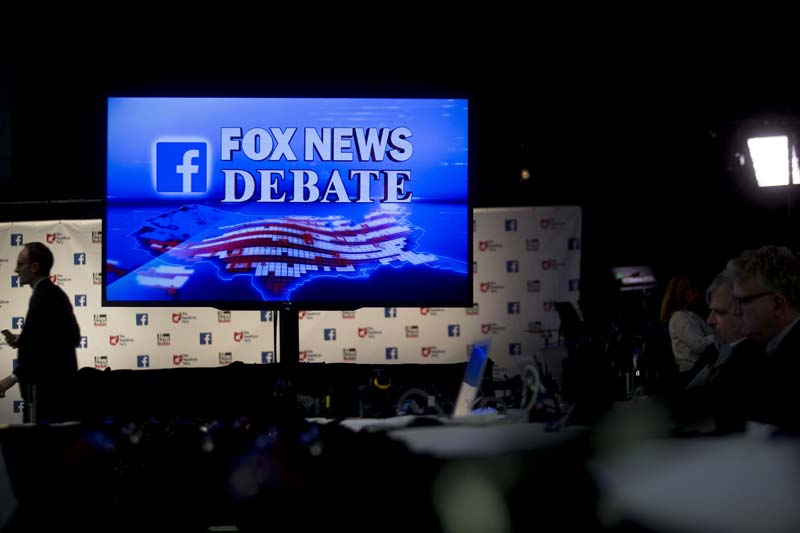 A Fox News Debate television screen in the media filing center ahead of the first Republican presidential debate, 2015. Andrew Harrer for Bloomberg

The Democratic National Committee has decided to exclude Fox News Channel from televising any of its candidate debates during the 2019-2020 cycle as a result of published revelations detailing the cable network's close ties to the Trump administration.

In a statement Wednesday, DNC Chairman Tom Perez cited a story in the New Yorker magazine this week that detailed how Fox has promoted President Trump's agenda. The article, entitled "The Making of the Fox News White House," suggested that the news network had become a propaganda vehicle for Trump.

"I believe that a key pathway to victory is to continue to expand our electorate and reach all voters," said Perez in his statement to The Washington Post. "That is why I have made it a priority to talk to a broad array of potential media partners, including Fox News. Recent reporting in the New Yorker on the inappropriate relationship between President Trump, his administration and Fox News has led me to conclude that the network is not in a position to host a fair and neutral debate for our candidates. Therefore, Fox News will not serve as a media partner for the 2020 Democratic primary debates."

Hours later, Trump responded to the decision by suggesting he might seek to retaliate.

"Democrats just blocked (at)FoxNews from holding a debate," he said in a tweet Wednesday night. "Good, then I think I'll do the same thing with the Fake News Networks and the Radical Left Democrats in the General Election debates!"

Winning the exclusive rights to televise the 12 candidate debates is considered a prestigious prize in the television business. The debates typically draw large audiences - the first Republican debate in August 2015 attracted a record 24 million viewers - and are a vehicle for promoting the networks' news programs.

Numerous networks, including Fox, have submitted proposals to the DNC to televise one of the 12 scheduled debates, which will start in June. So far, the organization has only awarded rights to the first two - to NBC (along with sister networks MSNBC and Telemundo) and to CNN.

In a statement, Fox News Senior Vice President Bill Sammon said: "We hope the DNC will reconsider its decision to bar Chris Wallace, Bret Baier and Martha MacCallum, all of whom embody the ultimate journalistic integrity and professionalism, from moderating a Democratic presidential debate. They're the best debate team in the business and they offer candidates an important opportunity to make their case to the largest TV news audience in America, which includes many persuadable voters."

The network hosted back-to-back town hall meetings with Democratic candidates Bernie Sanders and Hillary Clinton in 2016 but did not televise a Democratic debate that year.

Fox's connections to Trump have been documented for years. He had a regular spot on its morning program "Fox and Friends" starting in 2011, and has hired several of its former contributors and executives to work in his administration, including its former co-president, Bill Shine, who is now the president's deputy chief of staff for communications. Trump has been interviewed many times on the network, and has promoted various Fox talking points and personalities on Twitter.

Some observers have suggested that the network has become a kind of de facto "state TV," shaping and promoting Trump's policy agency.

Among other things, she reported that Roger Ailes, the network's late chief executive, may have informed the Trump campaign about a question involving Trump's treatment of women that former Fox News host Megyn Kelly intended to ask at the first Republican debate in 2015. Mayer also reported that Trump was tipped by Fox sources to a second debate question about whether the candidates would support the Republican nominee for president, regardless of who won.

Fox has denied this account; it said it was unable to confirm Daniels' story and didn't publish anything as a result.

The most startling revelation may have been that Trump ordered his former chief economic adviser Gary Cohn to pressure the Justice Department to pursue an antitrust case against AT&T's merger with Time Warner, the parent of Fox rival CNN, allegedly as payback for CNN's unfavorable news coverage of Trump. Cohn purportedly declined to pursue the president's directive, although the Justice Department did file an antitrust case, which a judge rejected.

The article also said Trump receives advice not just from Fox personality Sean Hannity, but also from lesser figures at the network, such as Pete Hegseth and Lou Dobbs, both of whom have been patched into Oval Office meetings to offer policy advice.


Previously:
• 02/20/19: CNN hires a prominent conservative to help direct its political coverage. Staffers are fuming
• 02/18/19: CNN's town halls: The network won't say why it gives a few the star treatment and keeps the rest of the field guessing
• 02/04/19: A tip from a 'concerned citizen' helps a reporter land the scoop of a lifetime
• 01/24/19: BuzzFeed, HuffPost latest digital giants to set giant-sized layoffs
• 01/21/19: BuzzFeed's stumble is highest-profile misstep at a time when press is under greatest scrutiny
• 12/20/18: Tucker Carlson is in BIG trouble, right? Not quite
• 08/29/18: A legend of Watergate fame faces new questions about a blockbuster Trump story
• 07/12/18: Once partners, 'Game Change' co-authors are at odds over their shattered franchise
• 06/01/18: MSNBC host Joy Reid faces new questions about her old blog
• 05/01/18: Cut the comedy? The White House Correspondents' Association is considering it
• 04/30/18: Prez's absence at White House correspondents' dinner turns it from schmooze-fest to snooze-fest
• 03/07/18: A chatty former Trump aide with a wild but wavering story raised some questions about live interviews
• 02/16/18: Reporting on tragedy: To explain or exploit?
• 01/04/18: The provocative, plugged-in author of new Trump book has previously been accused of playing fast and loose with facts
• 12/05/17: Blunderer Brian (Ross') staggering screw-ups
• 11/27/17: New news? Not on 'Morning Joe.' Hosts pass off a taped show as the live version
• 01/06/17: Why losing Megyn Kelly probably won't even dent Fox News' armor
• 05/09/16: Obama official 'fesses up: 'Narrative' created by administration sold Iran nuclear deal to clueless press
• 03/16/16: Despite the beatdown, reporters love the Trump beat
• 03/10/16: What really gets under Trump's skin?
• 03/04/16: Megyn Kelly leaves Trump sputtering to defend himself at debate
• 02/29/16: Think Trump's wrong? Fact checkers can tell you how often (hint: a lot)