CALLING MEXICO OUR NEIGHBOR (with the friendly feelings the word evokes) is like calling a pickpocket your financial adviser or calling an assailant your personal trainer.

When it comes to illegal immigration, Mexico is delibirately fleecing and assaulting us. 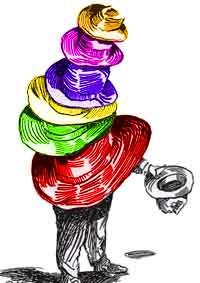 Fernando Solis Camara, who heads his nation's migration service, made explicit what has long been implicit -- Mexico will do nothing to stem the tide of illegals swamping American, from San Diego to Brownsville, Texas.

"At no time will we take any action that could discourage Mexicans from emigrating to the United States," Solis said. Illegals are poor people who leave their homeland "with the legitimate goal of bettering their lives," the official explained.

In other words, citizens of Mexico have a God-given right to violate American law, impoverish our nation and undermine our sovereignty in pursuit of economic betterment.

This is something less than the gratitude one would expect for all of the jobs we've sent south of the border, via the North American Free Trade Association, and our 1995, $20-billion bailout of the Mexican economy.

Not only will Mexico do nothing to help us, it sneers at our modest efforts to preserve the integrity of the border.

In 1994, when the United States unveiled a plan to erect security fences, Mexico's foreign minister scornfully noted that his countrymen "are specialists at making holes. ... Look at our silver mines."

Mexico's dual nationality law -- which went into effect in February -- is designed to encourage the alien influx.

Our good neighbor dumps its excess population in California and Texas, including its poorest and least educated. As a side benefit, it builds a base to influence our politics.

To America, 300,000 illegal immigrants a year (70 percent from Mexico) mean more poverty and crime, and a fraying of national identity. Illegals cost taxpayers roughly $20 billion a year in medical, educational and law-enforcement expenditures.

Currently, 3.6 million people who are eligible to immigrate to the United states are waiting to be admitted -- some have been in line for 17 years. Illegals are an affront to would-be immigrants who play by the rules.

But poverty, crime and social decay aren't Mexico's only exports. Mexico is a conduit for 70 percent of the cocaine and 25 percent of the heroin entering this country.

Dan Stein of the Federation for American Immigration Reform describes Mexico (ruled by the Institutional Revolutionary Party since 1929) as "a constitutional dictatorship -- Castro with sequins." What passes for a government in Mexico City is also an adjunct of the drug lords.

The Mexican newspaper El Universal just disclosed that Colombian cartels contributed $200,000 to the political campaigns of former president Carlos Salinas de Gortari, currently in exile with the profits of his years in power.

A 1997 article in U.S. News and World Report comments, "Many police and justice officials have abandoned all pretense and openly and flagrantly work for the drug cartels."

Phil Jordan, who ran the Drug Enforcement Administration El Paso Intelligence Center before he retired, charges, "Mexico's modus operandi (on drugs policy) is to tell us what we want to hear, to give us a carrot when certification time comes around, and as soon as they're certified, it's business as usual."

You might say Mexico's government gives us the same cooperation in the war on drugs that it provides on illegal immigration. In a reversal of policy, the Mexican government now forbids DEA agents from carrying firearms when they cross into Mexico. Armed drug agents might disrupt business as usual.

A nation's health may be gauged by how it reacts to genuine threats to its sovereignty and how many insults its willing to tolerate from foreign mendicants.

If we had an American government in Washington, if our foreign policy wasn't stamped "made on Wall Street" (when it comes to Third World debtor states like Mexico, bankers call the shots), we might be concerned about this.

We might stop the silly charade of certifying that Mexico is "fully cooperating" in the war on drugs. We might treat our Mexican border as the war zone it is, with a full mobilization to meet the menace.

And we could notify Mexico City that a reprise of Blackjack Pershing's punitive expedition of 1916 is possible if conditions continue. Mexican banditry didn't end with Pancho Villa.