HOW FITTING THAT BILL CLINTON should be the first president to visit the People's Barbed Wire Enclosure since the infamous slaughter nine years ago. 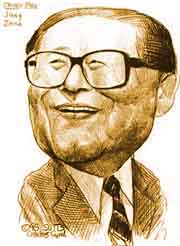 White House flack Mike McCurry pleads out that declining to be received at the site of the '89 massacre would "diss" the butchers. Why, it would be like a foreign head of state refusing to appear with the president on the South Lawn of the White House, McCurry suggested.

The analogy breaks down, somewhat, when one asks where the tank tracks are on the South Lawn.

Still, Beijing Bill will not be deterred from giving enormous face to those wonderful folks who threatened to lob missiles at us during the 1996 Taiwan Straits crisis.

And so, Mr. President, in order to maximize your visit later this month, I would like to offer the following suggestions for your itinerary and travel tips: