I'M NOT PARTICULARLY PROUD OF IT. Nevertheless, I must confess, I am a Clinton-hater.

Hatred is one of the least attractive human emotions. In my defense, Clinton is really the first president I've felt this way about. I didn't hate Jimmy Carter, an incompetent who brought us to the nadir of American prestige abroad.

And I didn't hate George Bush, whose rudderless administration paved the way for the Age of Lewinsky. I didn't even hate Lyndon Johnson, who wasted American lives by tying the military's hands in Vietnam and inflicted the Great Society on us. All were well-meaning, albeit inept, vain and ultimately clueless.

Clinton I hate. Politics aside, I find our 42nd president inadequate as a human being. 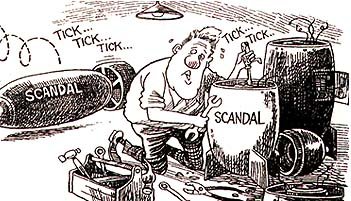 It takes incredible credulity to believe that 32 visits to the Oval Office by a 21-year-old intern, after she'd left the White House, were innocent and that gifts exchanged, phone calls made and jobs solicited were routine.

Clinton's sexual excesses mark him as little more than a bundle of hormones with an expensive haircut.

Similarly, only the most trusting soul could imagine that there's no connection between $421,000 in campaign contributions from an aerospace executive and the administration rubber-stamping efforts to upgrade the Chinese Long March missile.

Outside of Henry Waxman, Clinton's pit poodle in the House, does anyone really think that cash from operators like Johnny Chung, James Riady and Charlie Trie (Chung says he got $300,000 from Liu Chao-ying, a Chinese army colonel, to grease the White House) had nothing to do with technology gifts to the Middle Kingdom?

Did Clinton lobby Long Beach, Calif., officials to lease a vacant naval base to the Chinese merchant marine just for the heck of it? Sad to say, we've reached the point where the commander in chief probably shouldn't have a security clearance.

Much as I despise Clinton's venality, I find his posturing positively sickening -- his sanctimonious moralizing, his desperate need to appear compassionate, his grandstanding on teen smoking (while he bungles the war on drugs), his theatrical tears and show-offy hugs.

I hate the man's hypocrisy, his carte-blanche support for abortion (even a procedure as hideous as partial-birth abortion), while promising to make the procedure "safe, legal and rare."

For sheer obnoxiousness, this is equaled only by his racial-quotas plea ("mend it, don't end it"), when his only interest here is maintaining a gross injustice for political expediency.

It's difficult to say what's more worthy of disdain, his foreign or domestic policies. On the domestic front, there are his lies about the soundness of Social Security, his stealth defense of big government (reflected in his refusal to cut taxes in the face of budget surpluses) and his opposition to necessary reforms, from term limitation to school choice.

Last week, he vetoed a bill to provide 2,000 scholarships for students from low-income families in the District of Columbia. While professing his concern for the disadvantaged, he opposes giving them the opportunity Chelsea had.

I loathe his appointments; the corrupt (Ron Brown, Mike Espy, etc.), the ideological (Health and Human Services Secretary Donna Shalala -- politically correct from condoms to needles) and the absurd (former Surgeon General Joycelyn Elders, Hugh Hefner with a stethoscope). For the federal bench, he has tapped a gang of activists who will be reading their ideology into the Constitution for decades to come.

In foreign affairs, Clinton has established lethal precedents, turning the Army he scorned during Vietnam into a social-service agency (witness Haiti and Bosnia), while undermining military preparedness by feminizing the armed forces.

He bullies our only friend in the Middle East and embraces a thug who belongs on the gallows. He seeks sanctions against benign India, while approving the transfer of missile technology to malignant China.

Above all, I hate Clinton for demeaning the presidency more than any of his predecessors. I hate him for taking an office occupied by giants like Andrew Jackson, Abraham Lincoln and Theodore Roosevelt, and turning it into a combination singles bar and advance outpost for the People's Liberation Army.

I'm sorry to be reduced to this uncharitable emotion, and sorrier still to have a president who rightly arouses the