LAST FRIDAY, A COLLECTIVE SIGH OF RELIEF was heard across the nation. Our president forgives us.

Bill Clinton interrupted his Martha's Vineyard vacation to talk at a church in Oak Bluffs on the 35th anniversary of Dr. Martin Luther King's "I Have a Dream" speech.

Since his original, halfhearted, highly qualified apology was so poorly received (burdened as it was with arrogant defiance and reality avoidance -- not exactly the "Confessions" of St. Augustine), the masters of spin decided something more was needed. 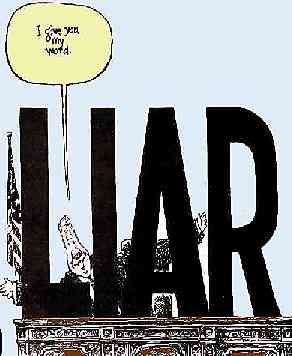 The result was even less persuasive than the first attempt.

The presidential penitent and pardoner reflected that "the resentment, the bitterness, the recrimination against the people you believe have wronged you" result in "self-inflicted wounds."

"And so it is important that we are able to forgive those we believe have wronged us, even as we ask for forgiveness from people we have wronged," the president sermonized.

Aides declined to elaborate on his remarks. Who is Clinton forgiving and why?

Speculation centered on special prosecutor Kenneth Starr. Is the president forgiving Starr for doing the job assigned to him by a three-judge panel of the federal appeals court (at the behest of Attorney General Janet Reno) and for following the trail of evidence wherever it leads?

Or perhaps the president is suggesting that he forgives the American people for what he considers to be our voyeuristic interest in his personal life and our refusal to let him get on with the business of governing while a cloud the size of the Himalayas hovers over his head.

Sing hosannahs. Clinton forgives us for caring whether our highest elected official misused his position and violated the trust conferred on him by turning the Oval Office into Monica's House of Submission.

He forgives us for our obsessive concern about whether he lied under oath and attempted to obstruct justice.

Clinton spoke of forgiveness. But what he seeks is to escape the consequences of his clearly immoral and possibly criminal conduct.

Forgiveness is a religious concept that implies soul-searching and sincere contrition. It doesn't work like a get-out-of-jail-free card.

Let's be clear about one thing: The president didn't the past seven months in emotional turmoil agonizing over his sins before deciding to unburden himself.

Only when Starr had conclusive evidence of the presidential rake's "inappropriate relationship," and after Clinton himself spent four hours being grilled before the grand jury, did he confess to something. We're still not sure what.

Bill Clinton is a desperate politician engaging in damage control, not a humbled spirit, wracked with guilt, admitting his transgressions.

Even when driven by necessity, Clinton couldn't disguise his self-righteousness.

In his 5-minute speech of Aug. 17, the president told us his relationship with Monica Lewinsky "was not appropriate" (without specifying how it was inappropriate) and that he regretted misleading people (without telling how he misled them).

He then went on to explain us that "presidents have private lives" (a fact heretofore unnoticed) and that his deviant behavior in the White House was none of our business. Not exactly the cry of an anguished heart.

Judaism and Christianity both put great emphasis on repentance, confession and forgiveness. Both also stress responsibility and consequences.

On Feb. 4, Karla Faye Tucker was executed by the state of Texas for her role in a grisly double murder in 1984. On death row, Tucker became a born-again Christian. Unlike Clinton's, her remorse seemed genuine.

Still, after her conversion, her victims were every bit as dead as they had been before. Confession and repentance do not obviate the necessity of punishment.

Whatever Clinton says (and he'll have much to say shortly, as the net closes), lies were told, trust was breached, the office of president was demeaned, and laws were broken.

For that, there must be a reckoning.