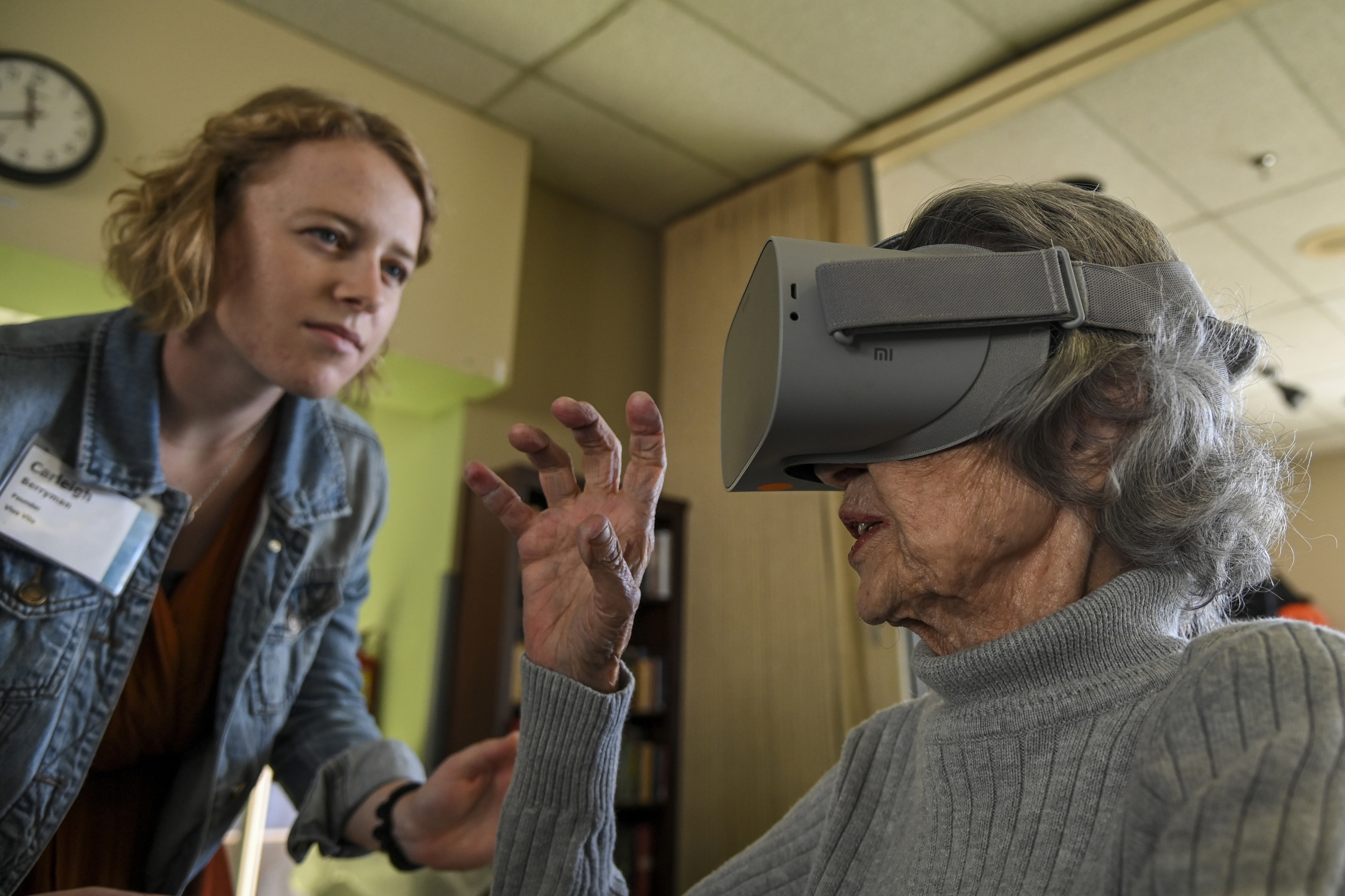 FALLS CHURCH, Va. - Jim Halsey, 83, has traveled to Japan and South Korea, through Europe and Central America. One recent day, he squatted in a narrow, wooden boat and watched as an elephant trudged through a swamp in Botswana.

Halsey, who was an intellectual-property lawyer before he retired, didn't have to leave his wheelchair at Powhatan Nursing Home in Falls Church to make the trip. He and several other residents at the retirement facility strapped on virtual-reality goggles and journeyed to the country in southern Africa, as well as to Antarctica.

Carleigh Berryman, 22, zigzagged between wheelchairs to fit virtual-reality goggle headsets on the residents of the retirement home. Her company, Viva Vita, is designed to bring virtual-reality experiences to older men and women who can no longer travel.

"It's exciting. It's different," Halsey said about his virtual tour through Botswana. He described orangutans and tigers that appeared in the bulky set of goggles on his face.

Berryman created Viva Vita while still a student at George Washington University. She secured $5,000 in seed money from the school's New Venture Competition for budding entrepreneurs.

Berryman entered the competition as a senior - advancing through several rounds while studying for exams and preparing for graduation - and won the runner-up cash prize in April. The money has helped pay for equipment and cover costs associated with registering the company.

Colleges have been criticized for graduating students who feel unprepared for the real world. But McCusker said the money from GWU has helped graduates launch successful start-ups, including the beverage company Capital Kombucha, the digital marketing agency Social Driver and KnoNap - a napkin that changes colors when it detects sedatives and "date rape" drugs in drinks.

"We did have some investor interest. We had two or three people that we're still talking to now," Berryman said. "We want to gain some more traction and show someone why they should invest."

Halsey's wife, Ellie Dasenbrook, 73, stood behind her husband's wheelchair as he watched the 360-degree video inside his headset. Unlike traditional videos, 360-degree videos are recorded by shooting multiple directions at once. They provide a panoramic view that moves with the viewer.

A smile spread across Dasenbrook's face.

"This type of activity is exactly what they need," said Dasenbrook, who visits her husband every day at Powhatan. "They can't travel like they used to, but they should still have these opportunities. They need the cognitive exercise."

The virtual-reality video used by 90-year-old Mary Chiappetta took her swimming under ice caps in Antarctica.

"I usually watch these things on television," Chiappetta said. "It's a wonderful project. You've seen pictures before, but this is right in front of you."

Berryman got the idea for Viva Vita about two years ago at GWU when she started learning about high rates of anxiety and depression among older Americans. It made Berryman think about her 78-year-old grandmother.

"It's not something you think about as a young person at all," Berryman said. "Their symptoms of anxiety or depression go unnoticed or go untreated, and it's this accepted part of aging."

In 2017, adults 85 and older had one of the nation's highest suicide rates: 20.1 deaths per 100,000 people, according to the Centers for Disease Control and Prevention. The national average among all age groups is 14 deaths per 100,000 Americans.

Jordan Yates, Powhatan's activities coordinator, said the facility has a geriatric psychiatrist who talks to residents and adjusts their medication dosages. In her role, Yates encourages "as much socialization as possible" among residents.

"I feel like it's a good way to get them back into the community," Yates said about the virtual-reality goggles. "It's bringing them back to the things that they enjoy."

"Maybe we can bring some joy back into these seniors' lives," she said. "We can bring something exciting to them so they can keep learning and exploring the world."

Berryman used her own money and the $5,000 she earned in the New Venture Competition to purchase goggles from Oculus, a virtual-reality company owned by Facebook. She finds free 360-degree travel videos online to play inside the headsets.

Berryman said she has earned "a few thousand dollars in the past few months" by booking sessions with about 10 suburban retirement communities, including Powhatan.

Residents who experimented with virtual reality said they would try it again.

Alice Murray, 87, said that next time, she would like to travel virtually to Ireland. She called the country home for 20 years.

"It was good seeing all these things without getting out your chair," she said.