Raccoon, sent as a Thanksgiving dish to the Coolidges, became a White House pet instead 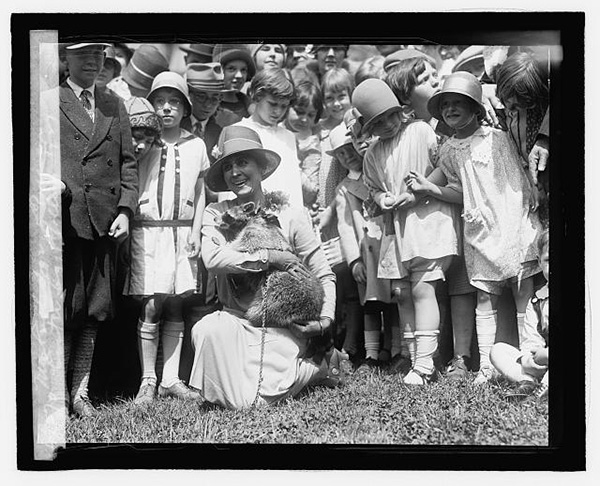 First Lady Grace Coolidge with Rebecca the raccoon at the White House in 1927.

A Mississippi resident sent a raccoon in a top-slatted soap box to the White House in November of 1926. The idea was that the animal would be slaughtered and prepared for a Thanksgiving feast, according to news reports. But President Calvin Coolidge didn't care for raccoon meat. Turkey would suit.

Also this was, first lady Grace Coolidge later wrote, "no ordinary raccoon." The animal was lively and seemingly tame. So instead of eating her, the Coolidges, who adored animals, kept the raccoon as a pet. They named her Rebecca, and when she was indoors, she roamed the White House apartments. She liked to sit in a bathtub and play with a bar of soap.

Rebecca achieved national prominence when the first family tried to domesticate her, but with her capers - all avidly chronicled by the media - she showed how we have never really known quite what to make of raccoons. Are they pests? Pets? Thanksgiving dinner? Rebecca certainly had an easier time than many of her peers, said Katherine Grier, a historian at the University of Delaware. In the 1920s, stylish raccoon coats flew out of stores. To some - including the Mississippian who sent Rebecca - raccoons were food.

"Animals slip in and out of these various categories based on our convenience," said Grier, author of "Pets in America: A History." "But certainly, for raccoons, this is a complicated moment."

Rebecca, for her part, became fodder for national conversations, if not a holiday meal. The Saturday after Thanksgiving, a cartoon in the Washington Evening Star showed a walrus-mustached man, broad-brimmed hat in hand, offering Coolidge a raccoon labeled, "Low Tariff." Coolidge, a proponent of high tariffs, holds his hand up in a "halt!" gesture, saying, "No thanks, I can't swallow that whole."

Early in 1927, renovations in the White House forced the Coolidges into temporary housing. They thought they would leave Rebecca to live outdoors, in her low treehouse and enclosure on the White House grounds, but the president missed her, the Associated Press reported. He liked to pat her and to play with her at night.

So after he finished working one March day, he took Rebecca back to his lodging in Dupont Circle. She burrowed close to him during the limousine ride. Later that month, an Evening Star cartoon showed Coolidge walking out of the White House with a raccoon tucked under each arm. One has a tag that says, "Economy," and the other wears one that says, "Tax Reduction." "I don't feel right without 'em!" the cartoon Coolidge is saying, referring to his policy preoccupations of the moment.

Soon after, Coolidge appeared with a never-explained bandaged hand, and the raccoon was hustled to the zoo. "From White House to Zoo is Rebecca's Sad Story," read one Baltimore Sun headline.

"Oh, she totally bit him. They are wild animals," Grier said.

But Rebecca was back with the Coolidges for the Easter Egg Roll on the White House lawn. Children thronged the first lady, who held Rebecca. The raccoon wriggled miserably and clawed. Sweaty Secret Service agents tried to protect the pair from the crowd. Photos from that day show a beaming first lady, wielding Rebecca the way you might hoist a dachshund. The raccoon wears a thick collar with an engraved nameplate.

Maybe the Coolidges believed Rebecca would behave more sedately in rural surroundings. When they traveled to South Dakota in the summer of 1927, the raccoon, along with two dogs and five canaries, went along. (Other animals acquired by Coolidge over the course of his presidency - many of them gifts - included lion cubs, a miniature hippo and a goose.)

One June night, Rebecca scaled a tall jack pine overlooking the Custer Park natural zoo and refused to come down, according to the AP. The president whistled and coaxed. Majority Whip John Q. Tilson and Wyoming Rep. Charles E. Winter, both Republicans like Coolidge, ineffectively tried to persuade her to descend, making one reporter quip that the raccoon had "gone Democratic."

Humorist Will Rogers, who was recovering from surgery that summer, wrote that he felt sorry for himself. He tried to check the sentiment by thinking about how others were worse off. On balance, he realized, the only individual with whom he wanted to switch places was Rebecca. "Who would have ever thought that coon would get to summer in the Black Hills," he wrote.

Other heights to which Rebecca ascended included a telegraph pole and a tree near the Metropolitan Club in Washington, D.C.; getting down required firefighters' help, according to the Billings Weekly Gazette. By then, the raccoon had long outlived the threat of becoming Thanksgiving dinner. But at least one columnist suggested that Coolidge turn Rebecca into a coat.

Rebecca's exploits were not yet finished. In 1928, a White House police officer caught a male raccoon and gave him to the president to keep Rebecca company. Coolidge told reporters his name was Reuben. That same day, the AP reported, the male raccoon shinnied up a tall tree on the White House lawn, and, like Rebecca, would not come down. Twice he made a break for it, and after the second escape, he was gone for good.

"Rebecca had lived alone and had her own way so long that I fear she was a little overbearing and dictatorial, perhaps reminding her spouse that he was living on her bounty," Grace Coolidge wrote later. Afterward, Rebecca, she wrote, "continued to live in single blessedness."


When the Coolidges left the White House in 1929, Rebecca went to live at the zoo permanently. A dog belonging to the new president, Herbert Hoover, took over the raccoon's enclosure.

Grier sees the Rebecca chapter as part of the evolution of presidential-pet media attention. Abraham Lincoln's son Tad had a goat that pulled a cart, for example, fascinating reporters of the time. But stories about animal lovers Theodore Roosevelt and his family, two decades before Coolidge took office, mark when "presidential pets really take off as a topic for news coverage," Grier said. The Coolidges may not have been "very interesting" characters, she said. "But they had lots of pets."

Raccoon never did take off as a Thanksgiving dish. But as a celebrity in her own right, Rebecca made her mark beyond avoiding death. Possibly recalling her popularity, Hoover borrowed raccoons - a female named Susie and her six kits - from the zoo for a garden party in 1930.

It just wasn't the same, a United Press reporter wrote: "When the Coolidges were in the White House there was no need of calling upon the Zoo."