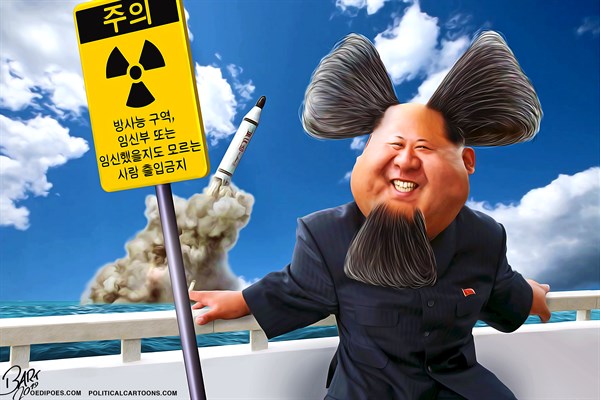 SEOUL - North Korea fired two projectiles Thursday, using the start of the Thanksgiving holiday in the United States to telegraph its frustration over Washington's refusal to grant sanctions relief.

The short-range projectiles were launched from Ryonpo on the North's east coast around 5 p.m. local time, South Korea's Joint Chiefs of Staff said. They added that the projectiles traveled about 235 miles and reached an altitude of 60 miles.

"This type of act from North Korea does not help efforts to alleviate tensions on the Korean Peninsula," the JCS said.

North Korean state media reported Friday that leader Kim Jong Un had overseen the test of what it described as a "super-large multiple launch rocket system."

The objective was to "finally examine the combat application" of the weapons system, the Korean Central News Agency said, adding that Kim expressed "great satisfaction" with the results.

The launch continues a more aggressive posture by North Korea over recent months as talks with Washington hit a stalemate. Pyongyang has warned that its patience is running thin, and has given the United States until the end of the year to change its "hostile" policy and salvage the dialogue process.

Earlier this week, North Korea said its troops carried out artillery drills near its disputed sea border with South Korea.

Japanese Prime Minister Shinzo Abe on Thursday described Pyongyang's actions as a threat to the region and the world.

"We will remain in close contact with the United States, South Korea and the international community to monitor the situation. We will increase our vigilance to preserve the safety and assets of the Japanese people," he told reporters.

Thursday's launches appeared timed to coincide with the Thanksgiving break and the second anniversary of Pyongyang's test of an intercontinental ballistic missile known as the Hwasong-15, emphasizing the message to President Donald Trump, said Rachel Minyoung Lee, a senior analyst at NK Pro, a North Korea-focused website.

"All in all, I think North Korea may be on a path toward more militaristic actions until the end of the year," she said. The regime had not issued official pronouncements on the United States since Nov. 19 and appeared to be letting its weapons do the talking, Lee added.

Pyongyang has threatened to resume long-range missile and nuclear tests, which Kim agreed to freeze after he and Trump met in Singapore last year. Relations deteriorated after a follow-up summit in February ended without an agreement on nuclear disarmament in exchange for sanctions relief.

Earlier this month, North Korea accused the United States of "betrayal" for continuing to hold military exercises with South Korea, and said it no longer felt bound by its previous promises.


Pyongyang has conducted more than a dozen shorter-range ballistic missile tests since April, and Trump has repeatedly played down their significance.

Kim has called for relief from the international sanctions that hobble his economy, but the United States says North Korea has not taken sufficient disarmament steps to justify easing the pressure.

"The deadlock in nuclear talks with the United States is pushing North Korea to ramp up the level of provocation," said Shin Beomchul, a researcher at Asan Institute for Policy Studies in Seoul.