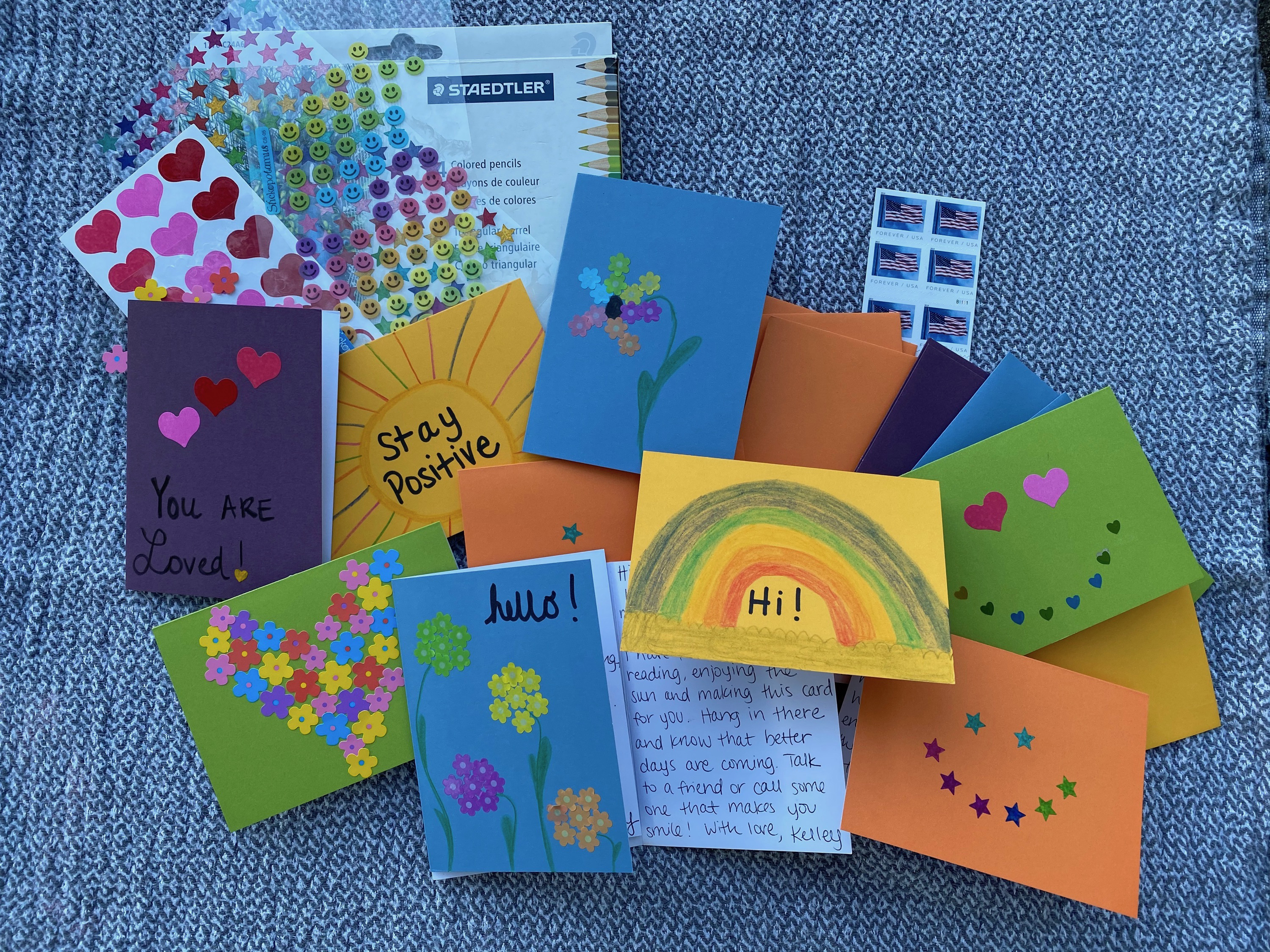 Shreya and Saffron Patel usually FaceTime their grandparents in England every weekend, but during the novel coronavirus pandemic, they have typically reached out each day.

Their grandmother on their mom's side hasn't left her apartment in nearly four months. She lives alone and can no longer socialize at the gym. Some of her younger friends have stopped by, and she leans out her kitchen window to chat. One friend sends handwritten letters.

When the Patel sisters, who live in Boston, spoke to their grandmother, they noticed her mood improve. She texted them about the cards and showed them to her teenage granddaughters during their video calls.

"We wanted to share that joy she was feeling with other seniors," said Saffron, a 16-year-old who recently finished 10th grade.

They started Letters Against Isolation in early April with a plan to send cards to seniors at care centers, where residents have lost in-person contact with their family and friends because of the coronavirus. Shreya, 18, who will begin her freshman year at Washington University in St. Louis this fall, reached out to a few local nursing homes, expecting maybe one to respond and ask for 10 cards. Instead, several agreed and hoped to receive a combined 200 cards.

The sisters reached out to others asking for help. As the network of volunteers continued to grow through the spring, so did the ability to connect with seniors. The organization has sent more than 14,000 cards and has partnered with 26 care centers across the country. It has become a sophisticated and well-organized operation, with about 1,400 volunteers around the world writing letters.

Early on, Shreya researched how people find volunteer work. She posted about Letters Against Isolation on a few volunteer boards and in a letter-writing forum on Reddit. About a week after the sisters began, the website had a sudden uptick in traffic and hundreds of people signed up. The form on the organization's website asks how volunteers heard about this opportunity. Many referenced a Country Living article.

The sisters didn't know a news story about them existed, so Saffron began searching. Nearly a month before Saffron's school newspaper wrote about the letter-writing organization, Country Living published a list of five ways to volunteer virtually during the pandemic. The story included opportunities such as transcribing historical documents for the Smithsonian and helping the Library of Congress organize its digital archives. The article also explained Letters Against Isolation's mission in two sentences and linked to the website.

With the base of volunteers growing each week, residents of every state except North Dakota have participated. Volunteers from 12 other countries, including Australia and Pakistan, have sent letters to these self-isolating seniors. Companies such as United Airlines and Pepsi have worked with Letters Against Isolation for internal volunteer events.

Shreya initially responded to hundreds of emails each day and matched volunteers to care centers. One week, the sisters assigned a group to a nursing home that had asked for about 40 cards. The group sent 400 letters, "so we decided we needed a better system," Saffron said, laughing.

Saffron streamlined the process with a sign-up form on their website. Volunteers receive an automatic response with details about how it works. They gain access to a spreadsheet where they log the letters they send each week. A nursing home may receive 20 cards from one group and another 10 from a different family, but now the sisters can ensure the care center receives the correct number.

Volunteers choose the center to which they would like to send letters, so they can pick one nearby or in their home states. Some have even recommended the organization partner with facilities where their family members live.

Saffron keeps a blog on the website to give volunteers inspiration for their letters. She offers ideas for what they could include: Describe how the weather is changing in your town, or make a list of joyful moments you've had lately and ask the recipient to also reflect on recent days. Saffron interviews some of the seniors, then writes about them and their reaction to the letters.

"It's just lovely to talk with them and learn about their life story," Saffron said.

The sisters still write a few letters and send a batch about once per month. But with the growth of their organization, their work has mostly focused on communicating with volunteers and care centers while keeping the system running smoothly.

They didn't expect this project, briefly a two-person venture, to expand so much, but they see its future stretching beyond the pandemic. The coronavirus helped the Patels better understand the problem of senior loneliness, but they know that even after its risks have diminished, there will be residents at care centers across the country who would benefit from a cheerful letter.

"I think it's still important to tell seniors that we're thinking of them," Saffron said, "and someone cares about them."