The Great Baby Formula Shortage of 2022 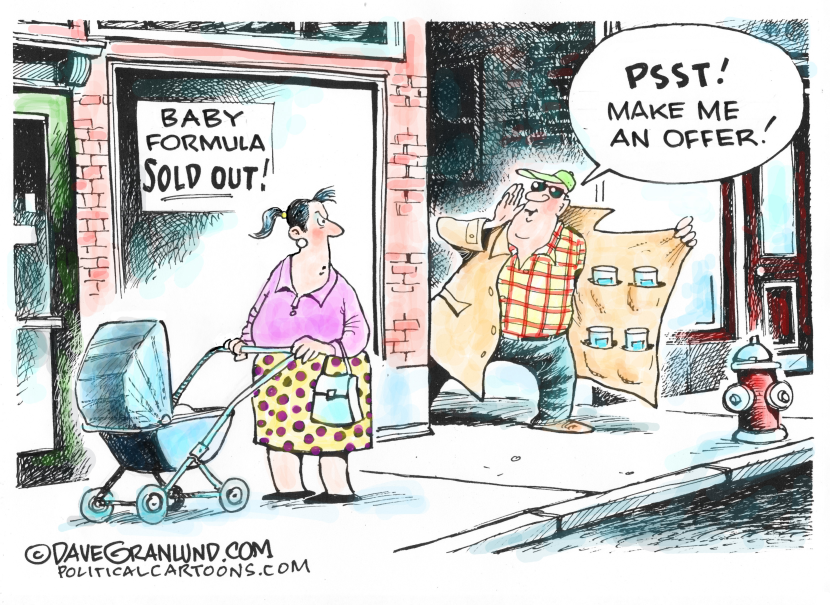 That's the big news story of the week.

In the richest country in the world, new mothers are not able to find baby formula or are having to stand in line for hours to get it.

That problem is at the top — for now — of the growing pile of economic blunders and social miseries that Joe Biden and his failing policies have caused the American people.

Our Teleprompter-dependent president denies any responsibility for screwing up the country in any way, but every voter knows the grim list.

In just 15 months on the job — or pretending to be on the job — he and his collection of left-liberal "experts" have brought us 8 percent inflation, sky high gas prices and food shortages.

And don't forget supply chain disruptions, 5 percent mortgage interest rates and soaring crime rates at home, plus an unnecessary and increasingly dangerous entanglement in a war between Russia and Ukraine.

On Thursday, the Biden administration finally acknowledged the baby formula shortage, blamed greedy formula makers and put forth the usual blather but of course took no responsibility for it.

When COVID was exported by China to the U.S., President Trump launched "Operation Warp Speed" to produce vaccines in record time without the usual lengthy FDA rules.

What we need for baby formula is something like "Operation Warp Feed," as someone on TV quipped, but don't look at anything like that from Biden.

Like all Democrats, he's following his party's traditional game plan:

First you destroy something that's working well in the private economy — like the energy industry — with a series of bad laws and policies that drive up prices or cause shortages.

And then you offer "free" government money to the victims and announce expensive new programs to fix the problems while pretending you didn't cause them in the first place.

Biden either ignores the economic or social problems he's created from scratch or made much worse and blames them on someone else.

Oil prices through the roof? Putin did it, not Biden's green energy policies or his sabotage of the energy sector.

Economy sinking toward recession? Republicans did it — though they're not in control of Congress.

Lately, according to Biden and the Democrats, the soaring prices of oil, gas and wheat are Putin's or Russia's fault.

It's a strange twist.

It used to be during the Cold War that Soviet leaders blamed the USSR's Third World standard of living on America and capitalism — not on socialism and a rigid command economy run by backward bureaucrats.

Remember how we used to laugh at the Soviets — or feel sorry for its citizens — because they had to wait seven years to get a "new" and crummy car?

Or how they couldn't buy Levi's or Beatles records and had to line up each day to buy basics like bread and toilet paper?

Now the Biden government is turning the U.S. into the old Soviet Union.

Baby formula is just the latest important product that has been transformed from something a new mother could always buy anywhere into a nerve-wracking ordeal.

Overnight, the simple act of buying baby formula has become a national problem — like trying to get a new car.

My son ordered a Ford Expedition last November — and it's still not built, thanks to the shortage of computer chips.

As Biden and his crew of lefties are turning the U.S. into the old USSR, there's no one in the country who wakes up happier every morning than Jimmy Carter.

Compared to Biden's dismal record, Old Jimmy looks like Winston Churchill and his legacy is looking better and better every day.

Michael Reagan is the son of President Ronald Reagan, a political consultant, and the author of "The New Reagan Revolution" (St. Martin's Press). He is the founder of the email service reagan.com and president of The Reagan Legacy Foundation.