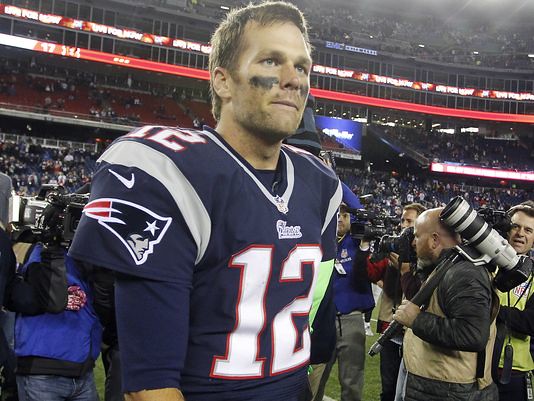 The delirium over the Philadelphia Eagles' victory over the New England Patriots seems to have been matched by delight in Tom Brady's defeat and the phantom throw of the century.

There he was, arguably the greatest quarterback ever to caress the pigskin, about to throw a crucial pass in the final few minutes -- and the ball disappeared. Knocked out of his hand by the Eagles' Brandon Graham, the loose ball was then covered by Eagles lineman Derek Barnett while Brady, his mind and shoulder already melded in forward motion, continued with the pass anyway.

It was surely cringe-worthy in slow-motion replay -- painful for fans but endlessly entertaining if you happen to be a die-hard Eagles fan. Or if, say, you'll never forgive Brady for Deflategate.

Glee over Brady's humiliation was widespread across social media. Rarely has schadenfreude -- pleasure in another's misery -- been so enthusiastically expressed, fueled by contempt for the Patriots' perennial success and the team's kill-stare coach Bill Belichick; but mostly it was Brady, who, no matter what else he does will always be a cheater in the minds of many football fans.


For them, Brady's four-game suspension last year after an NFL investigation found "substantial and credible evidence" that Brady knew Patriots employees were deflating footballs (allegedly the way he liked them) wasn't enough. Watching him lose control of the ball at a pivotal moment in the Super Bowl helped a lot. But what the Eagles' win revealed was that, while people may forgive a guy for cheating on his wife (see: world history), they seem to have a tougher time forgiving him for allegedly cheating on the field.

If many felt that Brady essentially received a pass with his brief suspension, Sunday was the day Karma came to Minneapolis. To watch the underdog Eagles win was sublime in its own way, regardless of whose team one supported. But to see Brady -- this immensely talented guy who was born lucky, married luckier (supermodel Gisele) and honed his God-given talents to walk taller than most mortals -- to see him tumble from the pantheon of myth came close to ecstasy.

Who needs mood-elevating pharmaceuticals when you can watch Tom Brady sit like a befuddled baby in the middle of a mash while his fully inflated ball takes a hike the other way?

Not yours truly. I'm still wincing. And, I was pulling for Brady for my own reasons, which have nothing to do with his lanky, chiseled good looks. Nothing. But I don't hate him for those attributes, either, though some apparently do. Tricia Romano recently wrote that Brady is the "embodiment of the Straight White Guy Who's Never Had to Suffer for Anything in His Life" in an essay for longreads.com titled, "Why We Love to Hate Tom Brady." (Romano is also the author of the Twitter account now christened "Tom Brady has Finally Been Stopped.")

If you walk on water, someone's going to want to drown you. (Ibid.)


Love him or hate him, Brady at work is a thing of beauty. Extreme competence is its own art form. As spectators, we vicariously experience immaculate execution and become part of a higher level of human endeavor. We can't do whatever it is, but the fact of the feat itself elevates the viewer. Imagine being the doer.

That Brady at 40 is still pushing the limits and chasing his best is one of the reasons I was pulling for him. It's the same with tennis. As much as I love the Spaniard, I will always belong to the Swiss maestro. Watching Rafael Nadal, who is 31, and Roger Federer, 36, play singles is about as close as most people get to the ballet theater. But no perfectly executed quadruple pirouette is any more breathtaking than watching "old-man" Federer race along the baseline and slide into a glissade to slam the ball cross-court into no-man's corner pocket.

If Brady has been football's most-hated hero, maybe his detractors can now see him as merely human and, thus, deserving of a second chance. But meanwhile, have you ever seen a more beautiful quarterback, inside and out, than Nick Foles? Fly, Eagles, fly!