As Russia gears up to invade Ukraine, the West faces a choice 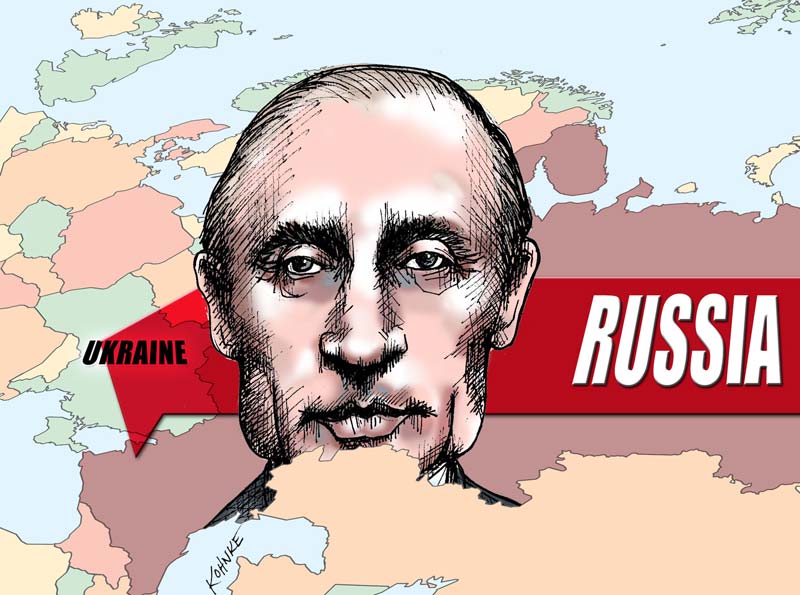 Along Russia's border with Ukraine, a massive military buildup is underway.

A "draft treaty" issued by the Kremlin demands that Ukraine be permanently excluded from joining the NATO alliance — or "our response will be military."

The writing is on the wall: Putin is planning to invade Ukraine.

Having paid no serious penalty for forcibly annexing Crimea in 2014, for seizing swaths of Georgia, or for deploying Russian troops to occupy a "breakaway" region of Moldova, Putin is poised to conquer eastern Ukraine and restore it to Russian domination. The most important of the captive republics to declare its independence when the Soviet Union broke up 30 years ago, Ukraine would be dragged back into Moscow's "sphere of influence."

The country's transition from authoritarian Soviet satrapy to Western-oriented democracy would be at an end. The NATO membership favored by a large majority of Ukrainians would be permanently off the table. And a significant piece of the West's strategic and moral victory in the Cold War — a victory Putin has described as "the greatest geopolitical catastrophe of the century" — would be undone.

In Washington, rhetorical support for Ukraine has been admirably bipartisan and unreserved. Will strong words be matched by equally strong action in the event of a Russian attack? That's much less clear.

President Biden says he warned Putin during a two-hour conversation on Dec. 7 that a Russian invasion would trigger economic sanctions "like none he's ever seen" and that he would face much stiffer retaliation than when he seized Ukraine's Crimean peninsula. "Things we did not do in 2014," Biden told Putin, according to national security advisor Jake Sullivan, "we are prepared to do now."

Presumably that includes equipping Ukraine with the lethal military equipment that President Obama balked at sending seven years ago, such as Stinger surface-to-air missiles, Javelin anti-tank missiles, and upgraded artillery munitions. But Biden ruled out any deployment of US combat troops on the grounds that Ukraine is not a full-fledged NATO ally.

In a speech to military commanders last week, Vladimir Putin claimed that Russia is an endangered victim, which must defend itself from an aggressive and threatening NATO alliance.

In the classic manner of belligerent despots bent on attacking a weaker neighbor, Putin claims that Russia is the victim and that it has no choice but to defend itself from the ominous aggressiveness of NATO and the United States.

"We are deeply concerned by the buildup of US and NATO armed forces on our borders and by exercises, including unplanned military drills," he said in a speech to Russian military commanders on Tuesday. "We have nowhere further to retreat. Do they really think we'll sit idly as they create threats against us?" Like Adolf Hitler's accusation in 1939 that Poland posed a mortal threat to Germany, Putin's charge flips the truth on its head to justify his own revanchist hostility.

"Putin's list of completely fabricated threats here is truly striking . . . and scary," tweeted Michael McFaul, who served as US ambassador to Moscow during the Obama administration. "If he's trying to scare us by acting crazy, he's succeeding w/ me."

For years, Putin and his apologists have railed against NATO's post-Cold War enlargement, repeatedly portraying it as a danger to Russia's national security and proof of the West's bad faith. This has always been gaslighting. NATO has never menaced Russia. On the contrary: It was the threat of Russia's aggression that led most of its former unwilling satellites to seek the protection of NATO membership.

"After decades of Soviet domination, we are all afraid of Russia," said Lech Walesa, Poland's democratic hero and Nobel peace laureate, in 1993. "If Russia again adopts an aggressive foreign policy, this aggression will be directed against Ukraine and Poland." The Baltic states — Lithuania, Latvia, and Estonia — had equal reason for anxiety. They had been invaded and annexed by the Soviet Union in 1940 and then abused by Moscow for the next 49 years.

It was perfectly reasonable for them to fear what Russia might attempt in the future and to seek shelter under NATO's mutual-defense umbrella.

As Russia readies an assault on Ukraine, the United States and its allies must choose now between appeasement and deterrence. The temptation will be to try to mollify Putin by giving him half a loaf — by agreeing to blackball the former Soviet republics from NATO membership, perhaps, or by tacitly accepting Russian hegemony in eastern Ukraine.

But appeasement will not satisfy Putin's appetite for conquest. "Moscow has never signaled limits to its ambitions," writes Nigel Gould-Davies, a British diplomat and senior fellow at the International Institute for Strategic Studies, in London. "Russia has at no point suggested that a settlement over Ukraine would restore relations with the West. . . . All evidence suggests that complicity in compromising Ukraine's sovereignty would not mollify Russia but embolden it."

The stakes in Ukraine involve more than territory. Thirty years after the Cold War's end, Russia continues to reject the right of small nations to shape their own destiny, free from intimidation by big powers. Putin, who cut his teeth in the KGB, does not acknowledge that Russia's neighbors are entitled to enter into alliances without Moscow's approval or to pursue their own peaceful interests even if they are at odds with the Kremlin's preferences.

America and its allies made no effort to thwart Putin's rapaciousness in Crimea seven years ago. They must do so this time. Especially after the Afghanistan debacle, it is more urgent than ever for the free world to defend Ukrainian sovereignty and democracy, and to force Russia's dictator to back down.

If Putin gets his way yet again, it will be only a matter of time before a fresh victim is in his crosshairs.