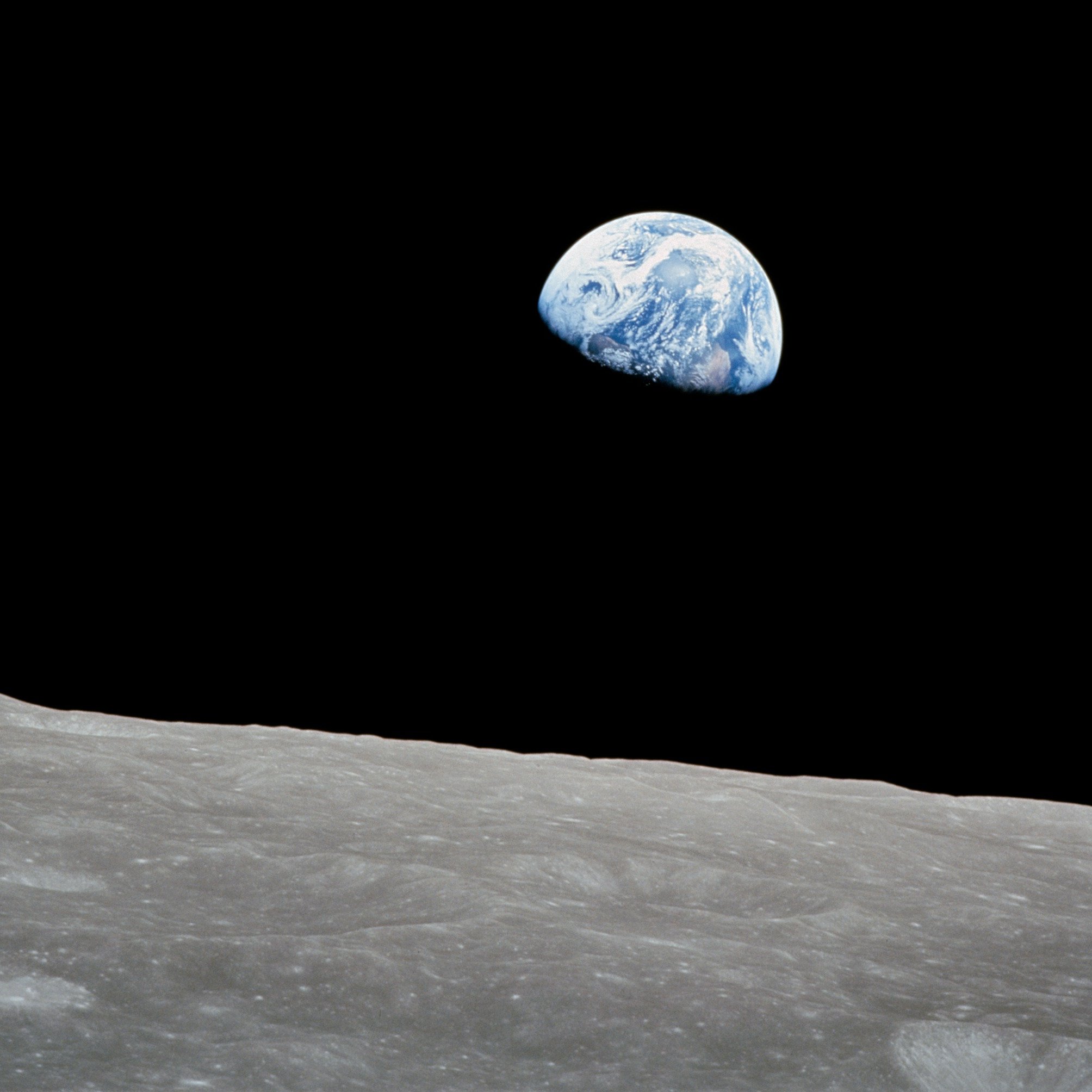 The astronauts aboard Apollo 8 were the first human beings to see the achingly beautiful image of the Earth from space, rising above the lunar landscape.

It was Christmas Eve 1968, and three American astronauts were in the midst of a mission to boldly go where no man had gone before. Frank Borman, Jim Lovell, and Bill Anders — the crew of Apollo 8 — were circling the Moon. At 8:30 p.m. Houston time, they were scheduled to make a live broadcast that would be beamed back to Earth. NASA had cautioned the men that their words would be heard by the largest audience in human history. An estimated 1 billion people — more than one-fourth of the world's population — would tune in. Yet the crew hadn't been told what to say. Their only instruction was: "Say something appropriate."

Going to the Moon hadn't been the original plan for Apollo 8. As published accounts of the mission have noted, it was initially supposed to be a flight only to low Earth orbit, where the crew could start getting used to NASA's new lunar module, and run through simulations of re-entering Earth's atmosphere after a lunar voyage.

Then everything changed. In September, the Soviet Union launched an unmanned lunar probe, Zond 5, which successfully orbited the Moon and returned to Earth. The CIA thought the Soviets might be planning a manned mission by the end of the year. America's shot at winning the space race, and of achieving President Kennedy's goal of landing an American on the Moon before the decade's end, seemed to be slipping away.

Whereupon, in a surge of audacity and Ă©lan, NASA switched gears. With just four months to make it happen, the decision was made to send Apollo 8 the Moon.

The risks were enormous. No one had ever traveled more than 850 miles from the Earth's surface; Borman, Lovell, and Anders would have to fly 240,000 miles to reach their destination. It would require the most powerful rocket ever built, the Saturn V, to propel Apollo 8 beyond Earth orbit. But Saturn V was new and had never flown a manned crew. In fact, it had only been tested twice — and the second test, in April, had gone very badly.

Even more unnerving was that Apollo 8's new lunar module, plagued by defects, still wasn't ready. That meant the crew would have no backup engine: no lifeboat. There would be only the single engine of the command module, which would be needed repeatedly — to fly to the Moon, to enter lunar orbit, to escape from the lunar orbit, and to return to earth. If that engine failed, the astronauts would be doomed.

The death of astronauts was no mere theoretical concern. In January 1967, an errant electrical spark had triggered a flash fire that destroyed Apollo 1 during preflight testing, killing three astronauts. Another such tragedy would be shattering to Americans, all the more so since Apollo 8 would be traveling over Christmas. America in 1968 had already experienced so much anguish — the assassinations of Martin Luther King and Robert Kennedy, race riots in US cities, the bloody Tet offensive in Vietnam. Chris Kraft, NASA's director of flight operations, later said that the decision to go to the Moon on such short notice "took more courage . . . than anything we ever did in the space program."

If fortune ever favored the brave, it favored NASA and the crew of Apollo 8. Borman, Lovell, and Anders became the first men to leave Earth's gravitational field, the first to travel through a quarter of a million extraterrestrial miles, the first to see the dark side of the Moon, and the first to see the heart-stoppingly gorgeous view of an Earthrise from outer space — to see the Earth, in Borman's awestruck formulation, the way G od must see it.

And now it was Christmas Eve. Apollo 8 was making the ninth of its 10 scheduled revolutions around the Moon, and it was time for the crew to "say something appropriate" to a waiting world. When the onboard camera came on, the three astronauts described the tasks they had been performing and their reactions to what they were seeing. Then, said Anders, "for all the people back on Earth, the crew of Apollo 8 has a message we would like to send to you."

As the bleak moonscape swept past below them, they read from the Book of Genesis:

Borman brought the transmission to a finish after the men had recited 10 verses.

"We close," he said, "with good night, good luck, a Merry Christmas, and G od bless all of you — all of you on the good Earth."

NASA hadn't known what the astronauts were going to say, writes Robert Kurson in "Rocket Men," a gripping account of Apollo 8's odyssey. "Inside Mission Control, no one moved. Then, one after another, those scientists and engineers in Houston began to cry."

They weren't the only ones overcome with emotion. The astronauts' words could not have more perfectly suited the moment. Fifty years ago, at another time when Americans and so much of the world were riven by turmoil, anger, and mistrust, Apollo 8 had found a way to remind Earth's residents that what unites them is far more profound and enduring than what divides them.