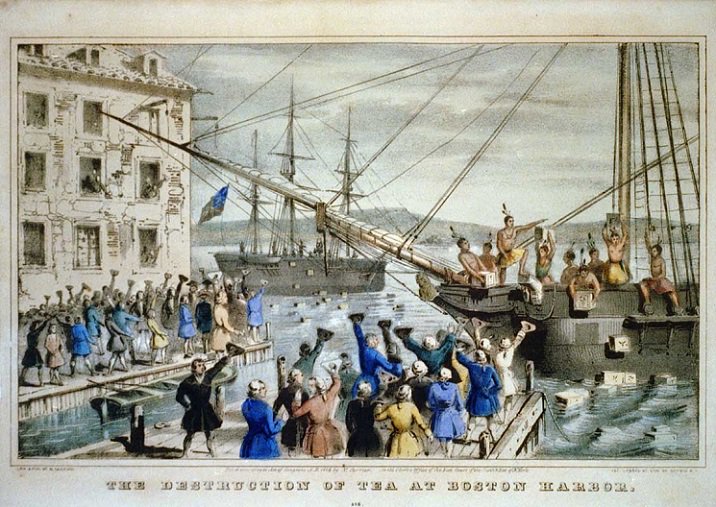 Thursday marked the 248th anniversary of the Boston Tea Party, the storied protest against the British tax on tea that occurred aboard three merchant ships in the harbor of Boston on Dec. 16, 1773.

When I learned American history in grade school, the Boston Tea Party was portrayed as an admirable act of spirited resistance by Massachusetts colonists chafing under British rule and especially resentful of "taxation without representation" — being forced to pay taxes imposed by a British parliament in which they had no voice.

To protest the tea levy, patriots throughout the colonies launched a successful boycott of British tea, causing huge losses to the British East India Company. Many Americans turned to illegally smuggled Dutch tea, which they could buy for less than the dutied English product.

Parliament responded by exempting the East India Company from the tax, thereby undercutting the local merchants and provoking a fresh wave of outrage across the colonies.

So when half a million pounds of tea were shipped by the East India Company to America in the fall of 1773, the opposition was intense. In New York, Charleston, and Philadelphia, protesters prevented the tea from being unloaded; the ships' captains decided instead to return with their cargo to England and avoid a potential confrontation with angry colonists.

When three British ships laden with tea — the Dartmouth, the Eleanor, and the Beaver — arrived in Boston at the end of November, they too encountered a hostile atmosphere. But the Crown-appointed governor of Massachusetts, Thomas Hutchinson, refused to let the ships leave the harbor — perhaps because the importers who had been appointed to receive the tea were his sons.

The standoff continued for several weeks, the tea remaining aboard the ships in Griffin's Wharf and the ships unable to leave. Finally, on Dec. 16, around 60 members of the Sons of Liberty disguised as Mohawk Indians boarded the ships with axes. They shattered 342 chests of tea, containing about 46 tons of merchandise, and hurled their contents overboard. The reported loss to the East India Company was ÂŁ9,659 — the equivalent of $1.7 million in today's money. When word of the destruction reached London, Parliament retaliated by enacting the Boston Port Act, which closed the harbor. That only intensified Boston's resentment of British rule, and helped set the stage for the outbreak of rebellion in 1775 at Lexington and Concord.

The causes of the Boston Tea Party (a nickname coined 50 years after the event) were more complicated than that brief summary — an excellent history for anyone interested is Harlow Giles Unger's 2011 book American Tempest — but what interests me right now isn't what led to the events of that night 248 years ago, but how we should regard it. The conventional view — the view I was taught as a kid, the view embraced in Boston's annual reenactment of the event, the view celebrated on US postage stamps — is that the destruction of the tea was a heroic blow for freedom and a noble step in the liberation of the American colonies from King George. I've come around to a different view.

Writing in his diary on Dec. 17, 1773, the day after the action, John Adams was rapturous with approval:

Last Night 3 Cargoes of Bohea Tea were emptied into the Sea. . . . This is the most magnificent Movement of all. There is a Dignity, a Majesty, a Sublimity, in this last Effort of the Patriots, that I greatly admire. The People should never rise, without doing something to be remembered — something notable and striking. This Destruction of the Tea is so bold, so daring, so firm, intrepid and inflexible, and it must have so important Consequences, and so lasting, that I cannot but consider it as an Epocha in History.

Boston's Committee of Correspondence, one of a network of anti-British activist groups in the colonies, sent Paul Revere to New York with news of what had happened. His dispatch described the public meeting that preceded the boarding of the ships, and recounted what transpired after that meeting broke up:

"In a very little Time, every Ounce of the Teas on board . . . was immersed in the Bay, without the least Injury to private Property. The Spirit of the People on this Occasion surprised all Parties who viewed the Scene."

By "private property," Revere meant merely that none of the personal effects of the ship's crew had been damaged. The 92,000 pounds of tea dumped into the harbor, however, were utterly ruined. That certainly was private property, and the loss to its owners was considerable. Was that massive and costly act of vandalism justified by the cause the vandals embraced?

I revere the founders of the American republic, and have written any number of times to celebrate their dual achievement in winning independence from Great Britain and founding history's first democratic republic . I have nothing but disdain for the "woke" view of history that considers the United States to have been, as Adam Gropnik contended in The New Yorker several years ago, "a mistake from the start" and "a terrible idea." I am grateful that the American Revolution succeeded, and that I was privileged to be born in the nation it gave rise to.

I am not arguing that it was illegitimate or unreasonable for the American patriots to resist the highhanded way they were treated by Parliament. Taxation without representation is indeed obnoxious, as were many of the other indignities to which the colonists were subjected, such as being denied the right to trial by jury and being forced to quarter soldiers in their homes.

Opposition to the Tea Act of 1773 was entirely defensible. But Boston's Sons of Liberty didn't have to destroy a vast fortune in tea in order to make their point. Anti-British patriots in other cities, after all, had forced the tea ships sent to their harbors to turn back without unloading their cargo.

There are times when breaking an unjust law is the only way to effectively advocate for justice. If that was the view of Boston's radicals in 1773, if they were truly convinced that the only way to fight the unfairness of the Tea Act was to take axes to the East India Company's property, then perhaps civil disobedience was called for.

But an essential element of committing civil disobedience is to face the consequences. In his "Letter from Birmingham Jail ," Martin Luther King, Jr., wrote: "One who breaks an unjust law must do so openly, lovingly, and with a willingness to accept the penalty. I submit that an individual who breaks a law that conscience tells him is unjust, and who willingly accepts the penalty of imprisonment in order to arouse the conscience of the community over its injustice, is in reality expressing the highest respect for law."

That was not what happened at the Boston Tea Party. The attack was carried out in disguise, and most of the perpetrators either fled the city or went into hiding as soon as it was over. It is hard to square their furtiveness with John Adams's euphoric praise ("so bold, so daring, so firm, so intrepid"). His cousin and fellow patriot leader, Samuel Adams, insisted after the attack: "Our enemies must acknowledge that these people have acted upon pure and upright principle." Then why did they run away?

I share the view of Benjamin Franklin, who deplored the vandalism of the Tea Party. He was "truly concern'd," he wrote in a letter from Europe as soon as the news reached him, "that there should seem to any a Necessity for carrying Matters to such Extremity, as, in a Dispute about Publick Rights, to destroy private Property." The East India Company, he observed pointedly, "are not our Adversaries."

George Washington, too, was dismayed by what the hotheads in New England had done. "The cause of Boston . . . now is and ever will be considered as the cause of America," he wrote from Virginia, but in his very next words, he condemned "their conduct in destroying the Tea."

It can be all too easy to justify, or to glorify, violence and wreckage in the name of a popular political cause. Zealous true believers have a way of convincing themselves that destruction they approve of is honorable. Most of the time, it is indefensible. To be sure, history is sometimes kind to the vandals, as it was to the men with axes in Boston's wharf in 1773. But that is no excuse for doing the wrong thing.

Even when you're on the right side of history, you have an obligation to act rightly.