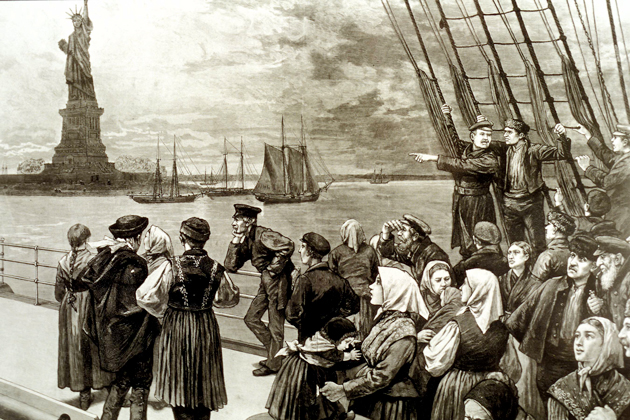 The framers of the Constitution gave the federal government no authority to restrict peaceful immigration. For the first century or so of US history, most foreigners wishing to move to the United States were legally free to do so.

The Constitution delegates many specific powers to the federal government, but a general right to bar or expel immigrants is conspicuously not among them.

During the national debate over the notorious Alien and Sedition Acts of 1798 — which (among other provisions) allowed President John Adams to unilaterally deport immigrants he deemed dangerous — James Madison and the Virginia General Assembly denounced the laws for investing the president with "a power nowhere delegated to the federal government."

Not until 1882 was there a significant federal law curbing immigration: the unabashedly racist Chinese Exclusion Act, which effectively slammed the door on immigration from China. Instead of striking down the law as unconstitutional, the Supreme Court upheld it on the grounds that the right to exclude foreigners for any reason was an "incident of sovereignty belonging to the government of the United States." That decision — by the same court that a few years later endorsed racial segregation in Plessy v. Ferguson — erased a core human right that the authors of the Constitution had never intended to curtail: freedom of immigration.

Plessy was eventually repudiated. But the assumption that the government has plenary power over immigration hardened into conventional wisdom. Today, the courts defer to virtually any restriction on immigration, including those based on national origin, political viewpoint, or religion; those based on family connections; and those based on numerical quotas.

To restore the freedom to immigrate intended by the Founders, a brief amendment should be added to the Constitution:

Neither the United States, nor any State, shall restrict immigration from nations with which the United States is not in a state of war, unless such restrictions are narrowly tailored to the advancement of a compelling government interest.

Under such an amendment, explains Ilya Somin, a professor of law at George Mason University and the author of Free to Move: Foot Voting, Migration, and Political Freedom, federal immigration restrictions would be presumed unconstitutional, much like laws that discriminate by race or silence political speech.

That presumption could be overcome when necessary to keep out foreigners posing a genuine threat to public safety, public health, or national security, each of which is a "compelling government interest."

By and large, however, peaceful individuals from any country would be free to move to the United States without impediment — just as individuals from one state may move freely to any other state.

To anti-immigration hardliners, such a change would be unthinkable. "A nation without borders is not a nation," former president Donald Trump declared dramatically to justify construction of a wall between the United States and Mexico. It's a common claim among those who want foreign migrants kept out, but it doesn't stand up to scrutiny.

A return to the "open door" policy of America's first 100 years would not mean that the nation's borders no longer had meaning, nor would it be tantamount to a surrender of US sovereignty.

Washington would continue to have full authority to repel foreign armies from those borders, and to enforce its laws and collect taxes within them. As an analogy, consider supermarkets, public libraries, or churches: They are generally open to all comers, yet no one disputes that they have full authority over their own premises.

Anyone may enter a supermarket, so long as they do so during business hours and through the front door. That doesn't give thieves a right to enter the supermarket in the dead of night, or by breaking in through the loading dock. Similarly, even with a freedom-to-immigrate amendment, newcomers would still be obliged to enter the country through lawful ports of entry and to comply with all border and immigration regulations.

Who would gain from such an amendment? The entire nation. Immigration is the great growth hormone of American history. More immigrants mean more economic development, more innovation, more cultural richness. Contrary to nativist shibboleths, immigrants are more law-abiding than US-born residents, they rapidly assimilate and acquire English proficiency, and they are highly patriotic.

"America is open to receive not only the opulent & respectable Stranger," wrote George Washington in 1783, "but the oppressed & persecuted of all Nations & Religions, whom we shall welcome to a participation of all our rights & privileges." That was the right policy when the United States was small and weak.

It remains the right policy for a nation that has grown into history's most influential superpower.

An immigration freedom amendment would restore the vision of the Founders by permanently opening the door to virtually all would-be Americans, whoever and wherever they are.