The point of Smollett's hoax 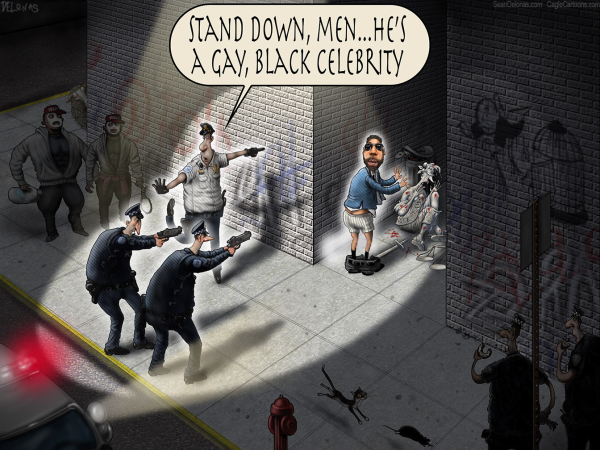 Long before a Chicago jury on Thursday pronounced Jussie Smollett guilty of five felony counts of disorderly conduct for faking a racist, anti-gay, right-wing assault and then lying about it to police, it was clear to anyone with a standard IQ — at least anyone not blinded by ideology — that the shocking crime the former "Empire" actor reported in January 2019 had been a sham.

As skeptics noted virtually from the outset, pretty much every element of Smollett's story was preposterous. Nothing about it passed the smell test, from the assailants toting a noose and bleach through the subzero streets of Chicago at 2:00 AM to the claim that they yelled "This is MAGA country!" in a city that went 83 percent for Hillary Clinton in 2016.

And yet, preposterous as it was, some of the most prominent progressives in US politics — including several who at the time were running for president — lined up to denounce the thugs who had supposedly ambushed Smollett. Many of them unquestioningly portrayed the attack as an illustration of the kind of hateful bigotry that is endemic in America.

• Joe Biden: " What happened today to Jussie Smollett must never be tolerated in this country. We must stand up and demand that we no longer give this hate safe harbor; that homophobia and racism have no place on our streets or in our hearts. We are with you, Jussie."

• Kamala Harris: "Jussie Smollett is one of the kindest, most gentle human beings I know. I'm praying for his quick recovery. This was an attempted modern day lynching. No one should have to fear for their life because of their sexuality or color of their skin. We must confront this hate."

• Bernie Sanders: "The racist and homophobic attack on Jussie Smollett is a horrific instance of the surging hostility toward minorities around the country. We must come together to eradicate all forms of bigotry and violence."

• Cory Booker: " The vicious attack on actor Jussie Smollett was an attempted modern-day lynching. I'm glad he's safe. To those in Congress who don't feel the urgency to pass our Anti-Lynching bill designating lynching as a federal hate crime â€“ I urge you to pay attention."

• Pete Buttigieg: "While the struggle for basic hate crime legislation continues here in Indiana, this horrible attack calls all Americans to stand against hatred and violence in all its forms."

• Tom Perez: "Let's call it what it is: A vicious hate crime. My heart goes out to Jussie's family — all of us at the DNC are praying for his full recovery."

• Elizabeth Warren: "Racism, homophobia & all forms of bigotry & hate have no place in this country. The fight for equality isn't over â€“ no one should have to live in fear of being beaten on the street because of who they are."

• Maxine Waters: "Ju ssie is my friend — a very talented & beautiful human being. It is so hurtful that homophobic haters would dare hurt someone so loving and giving. I'm dedicated to finding the culprits and bringing them to justice. Jussie did not deserve to be harmed by anyone!"

Beyond the politicians, an equally long list of media figures and entertainment celebrities, from Reese Witherspoon to George Takei to Joy-Ann Reid, took Smollett's story at face value and publicly expressed support for him. And as The Hill's media reporter Joe Concha later noted, many newsrooms were so quick to publicize Smollett's claim and its fallout that they lost sight of basic journalistic practice:

Missing from much of the breathless initial reports was a very key word: Alleged. As in, "the alleged attack."

If this were the first time that a shocking and despicable hate crime turned out to be a hoax or a trumped-up outrage, it would be easier to understand the readiness of so many prominent and savvy people to swallow Smollett's accusations without demur. But it isn't close to the first time.

"Many very high-profile incidents of 'racial hate' have unraveled similarly in recent years," writes Wilfred Reilly, a political scientist at Kentucky State University and the author of Hate Crime Hoax , published in 2019.

The Covington Catholic affair, which was at first alleged to have involved a mob of white high school punks chanting "Build the Wall" at a Native American elder, turned out to have been a shouting match between the high-schoolers and a group of radical "Black Israelites," which the Israelites started. Other incidents that turned out to be fake: Klansmen roaming the bucolic campus of Oberlin College, a white man harassing a black Georgia state representative in a grocery store, racists placing a "noose" in the garage of black NASCAR driver Bubba Wallace, Trump supporters tearing a hijab off of Yasmin Seweid on the New York subway, white bigots urinating on a young black girl in Grand Rapids, white men setting a biracial teenager on fire in Madison, and so on and so on. One could go back farther and add the Duke la crosse case and the fabricated assault on Tawana Brawley.

Plenty of other incidents the caused a media storm can be added to that roster: the student who falsely accused Smith of racially profiling her. The eruption of racist graffiti at Oberlin College that turned out to be the handiwork of two progressive students. The Black woman in Texas who made up a story about being sexually assaulted by a white state trooper. Inventing hate crimes where none occurred is all too common an occurrence.

Hate-crime hoaxers have different motives. Sometimes their intentions are tawdry or pathetic — to extract money or to gain personal attention. At others times, writes Reilly , a Black scholar who teaches at a historically black university, perpetrators claim they staged incidents "to call attention to real incidents of racist violence." But if acts of violent racism are indeed a widespread problem, why the need for deception? In truth, Reilly explains,

hate crime hoaxers are "calling attention" to a problem that is a very small part of total crimes. There is very little brutally violent racism in the modern USA. There are less than 7,000 real hate crimes reported in a typical year. Inter-racial crime is quite rare; 84 percent of white murder victims and 93 percent of Black murder victims are killed by criminals of their own race, and the person most likely to kill you is your ex-wife or husband. When violent interracial crimes do occur, whites are at least as likely to be the targets as are minorities. Simply put, Klansmen armed with nooses are not lurking on Chicago street corners.

In this context, what hate hoaxers actually do is worsen generally good race relations, and distract attention from real problems.

Hate crimes hoaxes are particularly contemptible for precisely the reason that hate crimes themselves are so reviled: because their target is not just the falsely accused individual(s), but also the entire population they are meant to alarm or intimidate. In the real world, hate-driven crimes of racial oppression — the kind of bloody, cruel, and frightening acts that were so common during the long era of Jim Crow and enforced segregation — are at a historic low. Trumped-up hate crimes, especially when they are widely covered in the media, cast a shadow over that optimistic truth and instead fuel fears that the haters are everywhere.

Racism and bigotry really do exist, of course. Every society has lowlifes and bullies. But by and large, this is not a nation that conspires to keep minorities — racial or otherwise — down, let alone to terrorize or humiliate them. Once upon a time, the killers of Ahmaud Arbery, George Floyd, James Byrd, and the members of the Mother Emanuel AME Church in Charleston, S.C., would have likely gone free. In today's America, they are convicted of murder and sentenced to very long prison terms — or to death.

It is precisely because America is no longer steeped in the racist oppression of the past that those who insist it is have too often resorted to fakery. And when they do, what is the result? Great outpourings of sympathy, solidarity, and outrage. The very reaction they elicit is evidence that the nation they live in is not an unreconstructed racist hellscape filled — as Bernie Sanders tweeted — with " surging hostility toward minorities around the country."

To repeat, hate crimes are real. But by now we should know not to take accusations of such crimes at face value unless they are accompanied by concrete evidence or ample eyewitness testimony. Because hate-crime hoaxes are real too, and some people are much too eager to believe them.