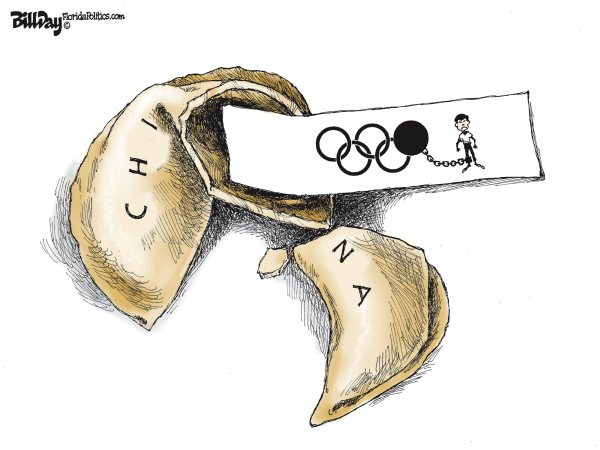 As the People's Republic of China prepares to host the 2022 Winter Olympics in February, its record of brutal human rights abuses is not being ignored by the Biden administration. White House press secretary Jen Psaki announced on Monday that "given the PRC's ongoing genocide and crimes against humanity," the United States would not be sending a delegation of government officials to the 2022 Winter Olympics in Beijing.

To be sure, American participation in the games themselves will not be affected. "The athletes on Team USA have our full support," Psaki stressed. "We will be behind them 100 percent as we cheer them on from home." But there won't be any American dignitaries cheering in the stands.

This so-called diplomatic boycott is the equivalent of coming in fourth in an Olympic event: It is an achievement that impresses no one, leaves no impact, and is soon forgotten. As international snubs go, it could scarcely be more trivial.

Few if any viewers will notice the absence of American diplomats and politicians among the spectators; even fewer will care. Xi and his communist regime will revel in the propaganda triumph of hosting the world's foremost sporting event, even as their "ongoing genocide and crimes against humanity" continue.

To date, however, there has been no reported letup in Beijing's systematic use of slave labor and torture, no diminution in its persecution of religious minorities, no slackening in its ruthless crackdown on Hong Kong, no easing of its bellicose threats against Taiwan, no end to its horrific practice of harvesting organs from Falun Gong adherents.

The concentration camps in which the Communist Party has imprisoned between 1 million and 3 million Uighurs in the Xianxang region are being expanded. So is the Orwellian system of high-tech surveillance designed to suppress any hint of thoughtcrime or dissent by Chinese citizens.

There is little that the United States or its democratic allies can do to force China's rulers to abide by fundamental norms of civilized behavior. At a minimum, however, they can decline to collaborate in the "sportwashing" of Beijing's gruesome atrocities. America and the free world should refuse to participate in the 2022 games unless they are moved out of China.

No one expects Olympic host countries to be paragons of virtue. But surely it is not too much to insist that the Olympics not be awarded to regimes that operate concentration camps and are actively engaged in genocide.

Nor should the games go to governments that recklessly threaten their neighbors, as China in recent months has threatened Japan, Australia, the Philippines, and India. And if all that isn't reason enough to disqualify Beijing, there is also the potential danger to athletes.

What Chinese officials did recently to Peng Shuai — the tennis champion who disappeared from public view after she accused a senior member of China's powerful Politburo of sexually assaulting her — they can do to anyone, Olympic contenders included. Peng is far from the first high-profile figure to vanish in China after running afoul of the Communist Party.

To its enormous credit, the Women's Tennis Association cancelled all tournaments in China in response to the suppression of the tennis star. That decision may cost the association millions of dollars, but it reflected a measure of fortitude and integrity that is beyond price — and that the rest of the sports world ought to emulate.

Even at this late date, the 2022 Olympics can be moved. As the American Enterprise Institute's Michael Mazza points out, "it is entirely within the International Olympic Committee's contractual rights to terminate its agreement with Beijing."

The 69-page Host City Contract empowers the IOC to terminate the contract at any point if it believes that athletes might be at risk "for any reason whatsoever" or if the government hosting the games is in violation of the Olympic Charter. As to the first, China's treatment of Peng and its detention of numerous foreign visitors are reason enough to be concerned about the safety of competitors from abroad.

As for breaching the Olympic Charter, China's dictators do so every hour of every day.

If the 2022 games go forward in Beijing with no more of a protest than a toothless diplomatic boycott, it will represent a foul betrayal of the Olympic movement's ideals. Even worse, it will amount to a betrayal of China's legions of wretched and broken human-rights victims.

"Make no mistake," writes Mazza, "every country that sends a team to Beijing will be complicit in China's worst abuses." The Women's Tennis Association stood up to Xi Jinping. So can the Biden administration and Team USA.

If the IOC won't relocate next year's games, America's athletes, corporations, and news media — and, yes, government dignitaries — should stay away. Better to forgo a few dozen medals than to turn our backs on the men, women, and children in China's concentration camps.