84 years of not suffering fools 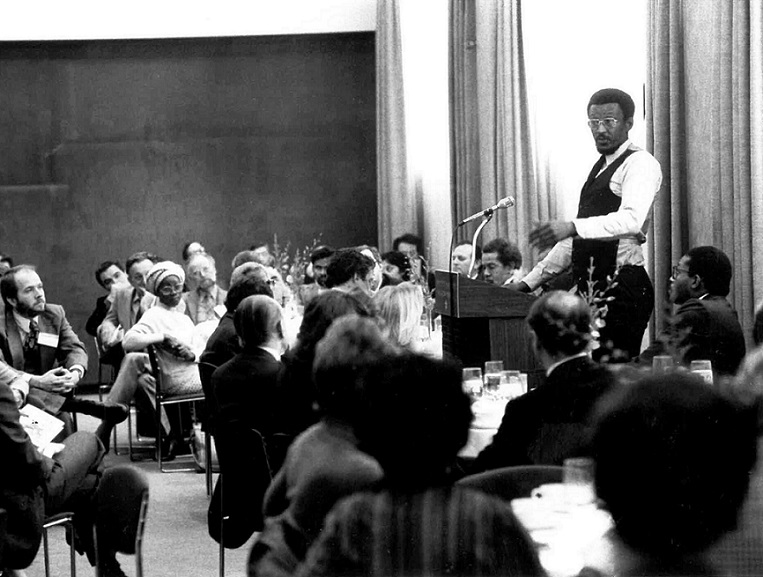 Walter E. Williams taught economics to university students for 47 years, the last 40 of them at George Mason University in Fairfax, Va. He taught his class as usual last Tuesday, then died suddenly some hours later. His death did not go unnoticed — lengthy obituaries appeared in both the New York Times and the Washington Post — but the news ricocheted with particular velocity through the world of conservatives, libertarians, and free-market economists: To us, Walter Williams was a rock star. In an appreciation posted on the George Mason website, the two most recent chairmen of the university's economics department recalled a moment in 1986, shortly after their GMU colleague James Buchanan won the Nobel Prize in economics. At a reception in Richmond, they wrote, "Buchanan noticed that the number of people milling around to speak to Walter was much larger than was the number milling around to meet" the new Nobel laureate. "I realized then," Buchanan remarked, "that I'm only the second most famous economist at George Mason."

Nothing in Williams’s early years would have led anyone to imagine he might one day outshine a Nobel Prize recipient.

Born in Philadelphia, he was raised by a poor single mother in a public housing project. There was no lavish welfare state in the 1930s, and black Americans, though widely discriminated against even in the North, embraced a philosophy of self-help so rigorous that the unemployment rate was lower among black males than among whites. Williams began working as a child. His first job was at Jack Friedman’s U-Needa-Hat Company, where he was hired to run errands and make deliveries. After a while, he taught himself one of the skills involved in hat-making — shaping buckram into a foundation on a pressing machine. Once, when two of the factory’s seamstresses didn’t show up for work during a particularly busy season, Williams persuaded the owner to let him try his hand at some of the sewing. He wasn’t as fast or skilled at the work as the more experienced seamstresses, so he was paid less than they were. But for a 13-year-old from the projects, it was a great chance to earn some money.

It didn’t last. I lost the job because one of Jack’s employees complained to the department of labor that he was in violation of child labor laws. When an official from the department interviewed me about my work, I, like most other people, thought they were acting in my interest to get me a higher wage. Not at all. Friedman’s seamstresses weren’t interested in my welfare. They found out that I was using the sewing machines after they went home and on Sundays, and they didn’t like the competition.

So the young Williams was let go, and the experience taught him a lesson that would be reflected in much of his work as an economist: Well-intended government interventions in the market routinely hurt the very people they are supposedly meant to help.

Years later, Williams developed the point in “Good Intentions,” a 1985 documentary he narrated about the unintended consequences of minimum wage, licensing, and other labor laws.

“Today, in ghettoes like I grew up in,” he says in the documentary, “70% of black children who look for jobs cannot find them. That’s a shame. Because a first job means much more than pocket change. It’s a chance for a start.”

In a 2015 interview, he amplified the point:

It wasn’t until Williams was drafted in 1959 and assigned to Fort Stewart, Ga., that he encountered his first real experiences with open and blatant racial segregation. Infuriated at being treated as a second-class human being fit only for unskilled labor, Williams pushed back.

“Though the US Army had been desegregated in 1948 through President Truman‘s Executive Order 9981, many black soldiers were being relegated to menial tasks such as grass cutting, sanitation, and KP duty,” he wrote in his memoir.

The motor pool, my initial assignment at Fort Stewart, didn’t work out well. I reported to a sergeant who told me that my job was to wash trucks and jeeps. . . . A few days later, when that sergeant saw me sitting and reading, he ordered me to paint a 2½-ton truck. I knew he meant paint the flatbed, but I asked, “The whole thing?” And he bellowed, “Yes!”

That was all I needed. I started painting the plastic rear window and then the tires. A crowd of soldiers gathered, laughing and shouting as they watched me. A lieutenant who approached to see what the ruckus was all about asked, “Soldier, what the f**k are you doing?”

I responded, in my best Southern Stepin Fetchit accent, “Boss, de sergeant told me to paint the whole truck; Ah’s just doing what he say.” The lieutenant ordered me to get solvent and then remove the paint from the windows and tires.

Reporting to work the next day, my assignment was to wash trucks and jeeps. While no one was watching, I lifted the hood of two trucks — a “deuce and a half” and a 4 x 4 utility vehicle — and used the powerful hose to wash the engine compartment, flooding the engines of both and rendering them inoperable. I guess I messed up the electrical equipment. Again, I played the stupid role, professing not to know what I was doing. To make the story short, I was finally ordered out of the motor pool and told to report to company headquarters for reassignment.

His stint in the Army intensified his outrage at racial discrimination. At one point he even wrote a letter about it to the commander-in-chief, President John F. Kennedy.

“Should Negroes be relieved of their service obligation or continue defending and dying for empty promises of freedom and equality?” he demanded. “Or should we demand human rights as our Founding Fathers did at the risk of being called extremists? . . . I contend that we relieve ourselves of oppression in a manner that is in keeping with the great heritage of our nation.”

Legalized racial segregation galvanized Williams’s hostility to government infringements on freedom and equality. “I was more than anything a radical” during the 1960s, he told an interviewer in 2011 . “I was more sympathetic to Malcolm X than Martin Luther King because Malcolm X was . . . willing to confront discrimination in ways that I thought it should be confronted, including, perhaps, the use of violence. But I really just wanted to be left alone.”

When his Army service was over, Williams moved to California, went to college, discovered the power and beauty of economics — and at last found the outlet for the radicalism that would shape the rest of his life. The focus of his scholarly research was documenting and understanding how markets and government policies affected minority groups — research he developed into two important books, The State Against Blacks and South Africa’s War Against Capitalism . He began teaching college students in 1973, and quickly declared war on affirmative action in academia — including the misguided practice of grading black students more leniently than their white peers.

“I often tell people that I am very, very happy that I got virtually all of my education before it became fashionable for white people to like black people,” he once said. “That meant that when I got a C, it was an honest-to-God C, and when I got an A, it was an honest-to-God A. They weren’t practicing affirmative action, and they didn’t give a damn about my self-esteem. . . . Affirmative action is one of the most effective means . . . of reinforcing racial stereotypes.”

For years, Williams wrote a syndicated column. He was never an especially elegant writer, but he had a gift for down-to-earth explanations of economic and constitutional principles. It was the “glaring dereliction of economists,” he said, that so many of them were so inept at “making our subject accessible to the ordinary person.” I have read scores of Williams’s columns, and can attest that whether you agreed or disagreed with his point, it was never inaccessible. A few examples:


From Whence Income? (2003):
Why is it that Michael Jordan earns $33 million a year and I don’t even earn one-half of 1% of that? I can play basketball, but . . . [people] who would plunk down $200 to see Jordan play . . . wouldn’t pay a dollar to see me play. I’m also willing to sell my name as endorsements for sneakers and sport clothing but no one has approached me.

The person who takes exception to Jordan’s salary or sees him . . . as making little contribution to society is really disagreeing with . . . millions of independent decision makers who decided to fork over their money to see Jordan play. . . .

Another part of the explanation for Jordan’s high salary is supply and demand. If there were tens of millions of people with Jordan’s talents, you can rest assured he wouldn’t be earning $33 million a year. Similarly, you can bet that if people really valued hamburgers and they were only a few people with [the skills to make them], they’d be earning much more than they currently earn.

From Why We Love Government (2006):
Today’s Americans hold a different vision of government [from the Founding Fathers]. It’s one that says Congress has the right to do just about anything upon which it can secure a majority vote. . . .

What do you think distinguishes the high and low poverty populations? The only statistical distinction in both the black and white populations is marriage. There is far less poverty in married-couple families, where presumably at least one of the spouses is employed. Fully 85% of black children living in poverty reside in a female-headed household.

Despite these strongly held preferences, there's no conflict. We never see Apple computer lovers picketing firms that serve PC lovers. Mercedes-Benz lovers don't battle Cadillac lovers. In free markets, people with strong differences . . . get along and often are good friends. The reason is simple. If you like double-breasted suits and I like single-breasted suits, we get what we want.

Contrast the harmony that emerges when there's market allocation with the discord when there's government allocation. For example, some parents want their children to say a morning prayer in school. Other parents are offended by that idea. Both parents have a right to their tastes, but these parental differences have given rise to conflict.


The liberty-oriented solution to the school prayer issue is simple. We should acknowledge the fact that though there is public financing of primary and secondary education, it doesn't follow that there should be public production of education. . . .

Free market allocation is conflict-reducing, whereas government allocation enhances the potential for conflict. . . . Think of the conflict that would arise if the government decreed that factories will produce either double-breasted or single-breasted suits, or that there will be either Cadillacs or Mercedes-Benzes, or that there will be either Apple computers or PCs. Can you imagine how otherwise-peaceable people would be forced into conflict with one another?

A few years ago, a terrific short documentary, “Suffer No Fools,” was made about the life and thought of Walter Williams. If you’ve got 54 minutes, it is well worth watching — absorbing, instructive, and inspiring. =