The rise of the 'school board voters' 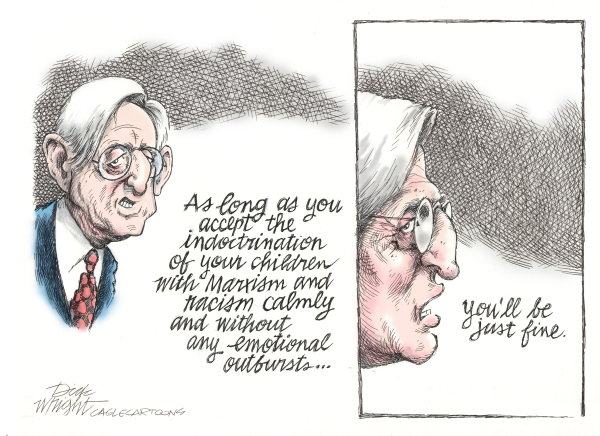 Remember "soccer moms?" During the 1996 election season, they were the married, middle-class, politically independent suburban voters who were widely regarded as the swing demographic on whom that year's election would turn.

Remember "values voters?" That was the term coined in 2004 for religious conservatives, the critical bloc whose support, it was said, put George W. Bush over the top in his reelection bid against John Kerry.

Six years later, the political momentum was with the libertarian/populist Tea Party voters — you surely remember them — who administered what President Barack Obama ruefully called a "shellacking" in the 2010 midterms, flipping the House of Representatives from blue to red.

Behold now the rise of yet another highly motivated slice of the electorate: the frustrated parents of K-12 students, angry about the policies being imposed on their children and attending — sometimes disrupting — school board meetings to vent their outrage and berate elected officials.

These "school board voters" have been showing up for months, in cities and states across the country, expressing intense concern and distress at what is happening in their kids' schools.

Parents have been galvanized into action by an array of issues. Some have been infuriated by pandemic-related school closures, others by mask mandates enforced on even the youngest students. Some are pushing back against curriculums contorted by "woke" theories of race and gender. Others are incensed that programs for gifted and talented students are being eliminated.

To all this, many on the Democratic left have reacted with remarkable tone-deafness.

In September, the National School Boards Association (NSBA) sent a now-infamous letter to President Biden, warning of the "immediate threat" school board members were facing from protesting parents, whose "heinous actions" it likened to "domestic terrorism and hate crimes."

So wildly inappropriate was the letter that several state school board associations severed their ties with the national organization. Eventually the NSBA retracted and apologized for the letter, acknowledging that it had "no justification" for using such incendiary language.

By that point, however, Attorney General Merrick Garland had taken the letter and run with it, issuing a memo that directed the FBI to assemble a task force and "determine how federal enforcement tools can be used to prosecute these crimes."

Instead of swatting away the ridiculous — indeed, antidemocratic — slander that chewing out local officials is akin to "domestic terrorism," Garland legitimized it. That was a serious overreaction by the Biden administration, one bound to convince many of these newly-engaged parents that Democrats are deeply hostile to their interests.

On any list of political blunders, demonizing and disparaging moms and dads worried about their children has to rank pretty high. Look no further than the Virginia gubernatorial race, in which Democrat and former governor Terry McAuliffe was viewed as a shoo-in to regain the office he vacated in 2017.

But that changed after his final debate with Republican Glenn Youngkin on Sept. 28, when McAuliffe made clear just where his loyalties were in the clashes between parents and school boards: "I don't think parents should be telling schools what they should teach," he announced bluntly.

That comment, and the mindset it reflected, transformed the race. As McAuliffe's words were replayed over and over, and as he doubled down on his position, education rocketed to the No. 1 issue in the campaign, with the share of likely voters calling it their top priority surging from 15 percent to 24 percent.

Though Biden, Obama, and Vice President Kamala Harris came to Virginia to campaign for McAuliffe, his lead evaporated. On Tuesday, Youngkin defeated McAuliffe, a dramatic victory for Republicans in a state that Biden carried handily last year.

As a political issue, public education is customarily seen as favoring Democrats, but the rise of the "school board voters" is a reminder that entrenched school boards and politicized teachers unions disrespect parents at their peril. "The power of education as a wedge issue," writes the Wall Street Journal's Kimberley Strassel, "crosses socio-economic lines . . . and it crosses racial lines."

In the 2020 election, Republicans gained support among minority voters; let the GOP solidify its appeal as the party of parental rights, and it stands to gain even more support in the midterms next year.

As a legal matter, school boards and school administrators have the power to decide what happens in public-school classrooms. But the question of what kids are taught and under what circumstances are electoral matters too. It isn't often that public school board parents are sufficiently aroused to flex their political muscles and decide those matters for themselves.

Don't underestimate what can happen when they do.