Of pencils and miracles 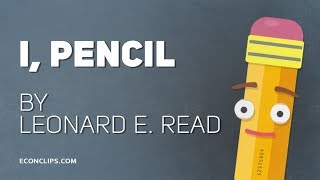 In 1958, a California businessman named Leonard E. Read published what may be the most imaginative and illuminating — and enduring — parable in all of economics. Titled, "I, Pencil," it is 2,200-word essay written in the "voice" of an ordinary wooden pencil. "I am taken for granted by those who use me, as if I were a mere incident and without background," it says,

I, Pencil, simple though I appear to be, merit your wonder and awe, a claim I shall attempt to prove. . . .

Simple? Yet, not a single person on the face of this earth knows how to make me. This sounds fantastic, doesn't it? Especially when it is realized that there are about one and one-half billion of my kind produced in the U.S.A. each year.

At first blush, that seems an absurd claim. What's so special or complicated about making a pencil?

Pick me up and look me over. What do you see? Not much meets the eye — there's some wood, lacquer, the printed labeling, graphite lead, a bit of metal, and an eraser.

But consider everything that doesn't meet the eye, Read continued. Consider the immense network of producers, vendors, manufacturers, suppliers, shippers, designers, and others without whose contributions those few simple components would be unavailable. Think, for example, of the wood, which comes from a tree in the Pacific Northwest:

Now contemplate all the saws and trucks and rope and the countless other gear used in harvesting and carting the cedar logs to the railroad siding. Think of all the persons and the numberless skills that went into their fabrication: the mining of ore, the making of steel and its refinement into saws, axes, motors; the growing of hemp and bringing it through all the stages to heavy and strong rope; the logging camps with their beds and mess halls, the cookery and the raising of all the foods. Why, untold thousands of persons had a hand in every cup of coffee the loggers drink!

The logs are shipped to a mill in San Leandro, California. Can you imagine the individuals who make flat cars and rails and railroad engines and who construct and install the communication systems incidental thereto? These legions are among my antecedents.

Consider the millwork in San Leandro. The cedar logs are cut into small, pencil-length slats less than one-fourth of an inch in thickness. These are kiln dried and then tinted. . . . How many skills went into the making of the tint and the kilns, into supplying the heat, the light and power, the belts, motors, and all the other things a mill requires? Sweepers in the mill among my ancestors? Yes, and included are the men who poured the concrete for the dam of a Pacific Gas & Electric Company hydroplant which supplies the mill's power!

Don't overlook the ancestors present and distant who have a hand in transporting sixty carloads of slats across the nation.

No less far-flung a network of workers, fabricators, shippers, and producers is required to supply the pencil's graphite, rubber, and brass ring. Read's point is that no single individual, working independently and from scratch, could possibly create an ordinary yellow pencil. "Millions of human beings have had a hand in my creation, no one of whom even knows more than a very few of the others," his narrator says. It is an astonishing illustration of the interdependence and cooperation of human beings all over the world, few of whom had any particular interest in pencils. Yet that's not all.

There is a fact still more astounding: The absence of a mastermind, of anyone dictating or forcibly directing these countless actions which bring me into being. No trace of such a person can be found. Instead, we find the Invisible Hand at work. This is the mystery to which I earlier referred.

In all this, Read sees something miraculous — something divinely inspired. No human planner or manager could "direct these millions of know-hows" and pull off the global cooperation needed to bring a box of pencils into existence. And yet they exist, and in abundance.

The lesson I have to teach is this: Leave all creative energies uninhibited. Merely organize society to act in harmony with this lesson. Let society's legal apparatus remove all obstacles the best it can. Permit these creative know-hows freely to flow. Have faith that free men and women will respond to the Invisible Hand. This faith will be confirmed. I, Pencil, seemingly simple though I am, offer the miracle of my creation as testimony that this is a practical faith, as practical as the sun, the rain, a cedar tree, the good earth.

It is a beautiful, brilliant, and eye-opening essay, and by now a fairly well-known one, at least in libertarian and free-market circles. Milton Friedman adapted Read's account for television in the first installment of his acclaimed PBS documentary series, "Free to Choose" and in a short lecture on YouTube that has been viewed hundreds of thousands of times. The Competitive Enterprise Institute, a Washington-based think tank, turned it into a lyrical animated film. In 2012, I wrote a Thanksgiving column inspired by "I, Pencil," in which I reflected on how amazing it is that your local supermarket can be counted on to have plenty of turkey for sale in the days leading up to the holiday, even though "no turkey czar sat in a command post somewhere, consulting a master plan."

Until fairly recently, the bountiful potential of economic liberty and voluntary human cooperation was one thing that nearly all conservatives would have saluted. But conservatism is undergoing all kinds of upheaval nowadays and many people who consider themselves to be on the right no longer regard the workings of global markets as a blessing but as something closer to a curse.

So I guess I shouldn't have been startled to see a piece in The American Conservative by a young writer named Declan Leary, in which he condemned the marvelous richness, creativity, and variety made possible by interplay of free markets and free people as a sellout to "Mammon and Leviathan." The essay is titled "We Are Not Pencils," though to judge from its URL, its original headline was "Pencils Are from the Devil."

Leary finds little to admire in Read's classic essay. His nose has been put out of joint by the current supply-chain crisis, which he appears to believe was caused by the market processes "I, Pencil" celebrates.

"Right now, all across America and elsewhere in the world, shelves that would have been stocked two years ago stand empty for days on end," Leary writes.

At major ports along the coasts, massive and mounting quantities of cargo are backed up waiting for distribution networks to . . . sort themselves out. The same great chains that just yesterday brought us cheap clothes and biohazards from our neighbors across the ocean now, by and large, are frozen at best and fractured at worst.

We find ourselves here, on the brink of crisis, not only thanks to some Invisible Hand but thanks to a series of active choices. In important ways, America chose to take Leonard Read's advice: "Leave all creative energies uninhibited. Merely organize society to act in harmony with this lesson. Let society's legal apparatus remove all obstacles the best it can." The most significant development in American political economy since Read's writing more than six decades ago has been the removal of nearly every obstacle to such organization at the international level.

The Invisible Hand wrenched away not just American jobs but America's very capacity to produce things. This is the darker side of Read's miracle: tradeoffs not just of one good or service for another, but of the very ability to do something ourselves for the luxury of not having to.

There is nothing novel in this argument; it is merely one more iteration of the old protectionist claim that economic self-reliance is better than economic openness. It differs only in degree from the autarkic North Korean philosophy of juche or Big Steel's demand for stiff tariffs or Donald Trump's inaccurate lament that "we don't manufacture anything anymore in this country."

The "invisible hand" is all well and good when it works, Leary grumbles, but "when it doesn't work, we find ourselves thoroughly screwed." And it's not working now, when shipments are delayed and supermarkets are dealing with shortages. He thinks it foolhardy to place "faith in freedom" and scorns the notion that the convenience of our modern service economy is worth what we have given up in its place. Far from rejoicing in the prosperity, innovation, and growth that freedom and markets generate, Leary advises that we

reject the miracle, as fully as we're able. Withdraw from dependence on the global system and reconnect ourselves to local, tangible, human networks of production and consumption. Accept, humbly, that subjection to forces we cannot control may not be a reasonable price for the creation of products we could not have made.

Now, you don't have to go live in a cabin in the forests of Montana. But you can take small steps to wean yourself off of fragile global supply chains and onto antifragile ones. Grow as much food as you can, and learn as many back-pocket skills as you can manage. Join co-ops for meat and vegetables with local gardeners and farmers. Shop at farmers markets and with local craftsmen. . . .

Maybe you'll have to do without your pencil, but — if current trends hold — the long, winding, miraculous supply chain isn't likely to get that to you either. Or anything else, for that matter.

Stop the world, he wants to get off. It is an old, old impulse but it is not, by my lights, a conservative one. Yes, supply chains may be messed up just now (not because of unfettered laissez-faire capitalism but because of lockdowns imposed amid a once-in a-hundred-years pandemic ). But the globalized, high-tech economy has been an extraordinary boon for America and the world. Glitches are inevitable in any system, but only the system of "I, Pencil" could have produced the benefits of our age: longer lives, lower infant mortality, the retreat of extreme poverty, the conquest of polio and smallpox, near-universal literacy, modern painkillers, smartphones, the virtual disappearance of famine. Oh, and a vaccine against COVID-19.

Follow Leary's advice to withdraw from most of the world, and it isn't only mass-produced pencils you will have to do without. Whether you call it the "invisible hand," as Adam Smith did, or "spontaneous order," in Friedrich Hayek's phrase, or simply the "magic of the marketplace," as Ronald Reagan termed it, the human flourishing it makes possible is equaled by nothing else we have ever devised. Free people freely interact, and the result is a torrent of goods and gains that would have flabbergasted earlier generations.

Is it a perfect system? Of course not. But it is without question a godsend, and for that any conservative worthy of the title should overflow with thanks.