If China attacks, it must know Taiwan won't fight alone 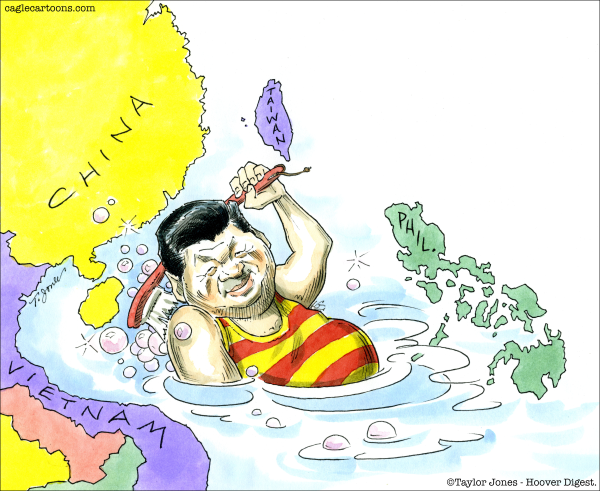 During a CNN town hall appearance on Oct. 21, President Biden was asked about China's recent hypersonic missile tests: "What will you do to keep up with them militarily, and can you vow to protect Taiwan?" Biden's instant reply: "Yes, and yes."

Anderson Cooper, who was hosting the event, promptly followed up.

"So are you saying that the United States would come to Taiwan's defense if China attacked?" Biden didn't hesitate: "Yes. Yes, we have a commitment to do that."

That answer flew in the face of the longstanding US posture of "strategic ambiguity." Under the 1979 Taiwan Relations Act, the United States is legally bound to provide Taiwan with the weaponry it needs to defend itself but has never explicitly promised to fight on Taiwan's behalf should it be attacked by China.

This deliberate lack of clarity was in keeping with a larger ambiguity, one incorporated in the Recognition CommuniquĂ© that established diplomatic relations between the United States and Communist China. Signed by Jimmy Carter in 1978, the communiquĂ© said that Washington "acknowledges the Chinese position that there is but one China and Taiwan is part of China." It did not say that the United States agreed with that position.

Strategic ambiguity long ago stopped making sense. Yet Republican and Democratic presidents have abided by it for more than 50 years, making sure never to say unequivocally that the United States will protect Taiwan from a Chinese attack. So Biden's CNN remarks were quickly walked back by the White House, which issued a statement denying any change in policy.

But the policy should change. Biden's instinctive answer was the right one: Of course the United States must intervene if China tries to invade Taiwan. Ending all ambiguity on that score — making sure China and the world know that Taiwan will not fight alone — is the best way to deter a Chinese attack.

This wasn't the first time Biden declared that the United States would come to Taiwan's defense. In August, as the calamitous US withdrawal from Afghanistan was raising doubts everywhere about America's reliability as an ally, Biden assured ABC's George Stephanopoulos that "we would respond" if there was an action against a member of NATO, adding: "Same with Japan, same with South Korea, same with Taiwan." On that occasion, too, the White House was quick to insist that nothing had changed.

Nor is Biden the first president to get tangled on this point. As the New York Times noted recently, "20 years ago [then-Senator] Biden warned President George W. Bush that 'words matter' after Bush said he would do 'whatever it took' to defend Taiwan."

Why would two presidents as unalike as Bush and Biden reflexively affirm that American forces will protect the island nation from attack? Perhaps because the strategic and economic importance of Taiwan is so manifest, and the prospect of an invasion by China so alarming, that they know it would be irresponsible to give any other answer.

After the Chinese Civil War ended in 1949 — when Mao Zedong and the Communist Party took control of the mainland while Chiang Kai-shek and his Nationalist forces fled to Taiwan and established a government in exile — each side claimed to be the rightful ruler of all. But the regime in Taipei long ago abandoned the fiction that it is the lawful government of mainland China.

Just as the Chinese Communist Party has never governed Taiwan, the government in Taiwan has never ruled the mainland. Since the 1980s, the island has metamorphosed into a thriving democracy that abjures any interest in exerting power across the Taiwan Strait. Beijing's insistence that Taiwan is a mere renegade province that must sooner or later be "reunited" with China is not only false and offensive but dangerous — and getting more so.

For years, China has been sending aircraft into Taiwan's air defense identification zone, but in recent months, the incursions have grown intolerable. More than 150 Chinese planes have crossed the line in October alone. The United States has warned China to stop its "provocative military activity," and has dispatched special-operations troops and Marines to help train Taiwan's military forces. Yet China shows no inclination to dial back its belligerent rhetoric and behavior. Why should it?

It has paid no penalty for extinguishing Hong Kong's political liberty, it is getting away with its brutal repression in Xinjiang, and despite its horrendous human rights record, it is poised to host the 2022 Olympics. All the while, the rest of the world acquiesces in Beijing's demand that Taiwan be blackballed from the UN and numerous international bodies.

The United States and its allies should have put an end to this long ago. They didn't — and an emboldened Beijing is now issuing ever-more-aggressive threats to absorb Taiwan by force. "The mainland will resolutely continue strengthening its military preparation to gain decisive and overwhelming leverage to finally resolve the Taiwan question," the Communist Party newspaper China Daily announced recently."

From Adolf Hitler's occupation of the Sudetenland to Saddam Hussein's invasion of Kuwait, history has repeatedly taught that failing to deter dictators from attacking small neighbors can lead to devastating results.

Taiwan is modest in area, but it is home to 23.5 million people who have built a modern liberal democracy and the world's 21st-largest economy. The conquest of Taiwan by China would be cataclysmic. International trade would be thrown into chaos. The entire Western Pacific would be destabilized.

The credibility of the United States, were it to allow such a thing to happen after the debacle in Afghanistan, would be shattered.

Under the terms of the Taiwan Relations Act, US relations with Beijing are predicated on "the expectation that the future of Taiwan will be determined by peaceful means." The clear implication is that if China turns to non-peaceful means to shape Taiwan's future, the United States is free to adopt a different strategy.

We should do so. "Strategic ambiguity" ought to be ditched. The United States should announce — preferably in a joint statement with such Indo-Pacific allies as Japan, Australia, South Korea, and India — that it regards China and Taiwan as separate, sovereign, independently governed countries, neither subordinate to the other. American defense cooperation with Taiwan should be ramped up and advanced US weapons based on the island to deter any Chinese attack, in much the way that Pershing missiles were deployed in Europe during the 1980s to deter a Soviet attack.

Over the past two generations, Taiwan has transformed itself from an outpost of authoritarianism into an oasis of liberty, human rights, and economic freedom. Its population is but a sliver of China's, but in that sliver is the hope of what China and its billion people might one day become. The continued safety and security of that democratic sliver is in the highest interest of the United States, and when an American president says so, his words should stand.