The 'nuanced' history of Thomas Jefferson 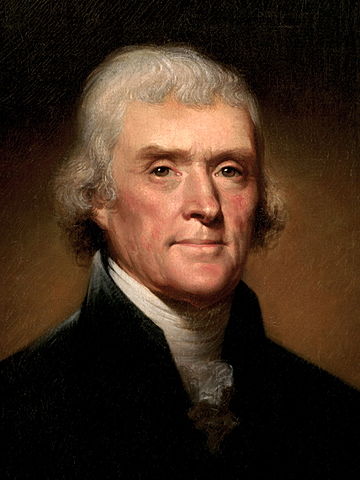 When New York City officials voted unanimously last week to remove the larger-than-life statue of Thomas Jefferson that has stood in City Hall's council chamber since the 1910s, council member Adrienne Adams rationalized the move on the grounds that the nation's third president "embodied some of the most shameful parts of our country's long and nuanced history."

That was a reference, of course, to Jefferson's record as a slaveholder, which is not only a stain on his reputation today but has been one for more than two centuries. Indeed, Jefferson's ownership of enslaved people was a decided blot on his image during his own lifetime. Published attacks on him for his relationship with Sally Hemings, with whom he is believed to have fathered six children, date back at least as far as 1796 ; some, printed under a pseudonym, were written by Alexander Hamilton, a fellow Founding Father.

In other words, there is nothing remotely new about deploring Jefferson's personal involvement in the buying, selling, and exploiting of African human beings. But there is also, to use Councilor Adams's term, nothing "nuanced" about the way she and her colleagues represent Jefferson — denouncing him as a degenerate whose complicity in the slave system of his native Virginia was the most important fact of his life, one that overshadows everything else about his astonishing career and renders him worthy only of disgrace.

Consider how that statue of Jefferson ended up in New York's city hall in the first place. It was commissioned in 1833 by Uriah P. Levy, an American naval hero who was the first Jewish commodore in the United States Navy. Levy was repeatedly targeted by antisemites who resented him for his religion, and the American guarantee of freedom of worship was one he deeply cherished. He donated the statue specifically to commemorate Jefferson's advocacy of religious freedom in the armed forces.

"Jefferson, for all of his blindness concerning the evils of slavery, championed religious liberty in Virginia and in the nation as a whole," writes Jonathan D. Sarna, the noted Brandeis historian.

"The legitimate powers of government extend to such acts only as are injurious to others," he wrote in Notes on the State of Virginia in 1781. "But it does me no injury for my neighbour to say there are twenty G ods, or no G od." And he specifically championed the rights of Jews. He expressed pride that the University of Virginia, whose founding he considered one of his supreme achievements, both accepted Jews and "set the example of ceasing to violate the rights of conscience by any injunctions on the different sects respecting their religion."

Even as he denied his enslaved people their liberty, Jefferson espoused high-minded views concerning religious liberty as well as the "inalienable rights" that he detailed in the Declaration of Independence. Mr. Levy, like many Jews, honored him for that.

When the statue, by French sculptor Pierre-Jean David d'Angers, first arrived in New York, Levy charged an admission fee to view it, then spent the proceeds to feed the poor. So the statue that council member Adams sees as reflecting "the most shameful" elements of American history in fact had nothing to do with them. Jefferson was honored for his legendary defense of religious freedom, and the statue was used to raise money for the needy. Wouldn't a "nuanced" approach of the issue include those details?

Reasonable people can agree that Jefferson's role in slavery was a terrible moral failing, even his worst moral failing. But Jefferson was anything but a smug and complacent advocate of slavery. On the contrary: Despite his own interests and unclean hands, he was, at times, among the most eloquent and influential opponents of slavery in 18th-century America.

As a delegate to the Confederation Congress in the 1780s, Jefferson worked to prohibit the introduction of slavery into any new American lands — a prohibition that was enshrined in the Northwest Ordinance of 1787, which established the Great Lakes region as the newly independent nation's first organized territory. As president 20 years later, he signed legislation forbidding "the importation of slaves into any port or place within the jurisdiction of the United States," thereby ending US participation in the Atlantic slave trade. In so doing, he lived up to his own words a few months earlier, when, in his sixth Annual Message to Congress (what we today call the State of the Union message) he promised to "withdraw the citizens of the United States from all further participation in those violations of human rights which have been so long continued on the unoffending inhabitants of Africa, and which the morality, the reputation, and the best of our country have long been eager to proscribe."

In an essay published Friday, the noted American historian (and liberal Democratic loyalist) Sean Wilentz characterized Jefferson as a "man of contradictions." On the one hand, his Notes on the State of Virginia, the only full-length book Jefferson published, "indeed contains hair-raising comments about Black people, closer than not to the common view among his fellow white Virginians." At the same time, wrote Wilentz, Jefferson's book "also contains an indictment of racial slavery as an offense to heaven — an uncommon view in Virginia, especially among slaveholders."

It was in that book that Jefferson described slavery as "the most unremitting despotism," one bound to bring down divine wrath on the United States. "Indeed," Jefferson wrote, "I tremble for my country when I reflect that G od is just: that his justice cannot sleep forever." Coming from a slaveholding Virginian, those words "are worth Diamonds," wrote the fervently antislavery John Adams of Massachusetts. "They will have more effect than Volumes written by mere Philosophers."

We've come to our nation's capital to cash a check. When the architects of our republic wrote the magnificent words of the Constitution and the Declaration of Independence, they were signing a promissory note to which every American was to fall heir. This note was a promise that all men, yes, Black men as well as white men, would be guaranteed the "unalienable Rights" of "Life, Liberty and the pursuit of Happiness." It is obvious today that America has defaulted on this promissory note, insofar as her citizens of color are concerned. Instead of honoring this sacred obligation, America has given the Negro people a bad check, a check which has come back marked "insufficient funds."

I have a dream that one day this nation will rise up and live out the true meaning of its creed: "We hold these truths to be self-evident, that all men are created equal."

A century before MLK, another champion of Black liberty — Abraham Lincoln — likewise invoked Jefferson's formula, appealing to the transcendent truth of the Declaration's words in defense of the war to preserve the union and abolish slavery. The United States, Lincoln told the audience that gathered to dedicate the Gettysburg battlefield as a national cemetery, was the world's first republic to be "conceived in liberty and dedicated to the proposition that all men are created equal."

A decade earlier, inveighing against slavery on Independence Day in 1852, Frederick Douglass famously asked : "What, to the American slave, is your 4th of July?'' It was a "sham," he answered, "empty and heartless . . . revolting barbarity and shameless hypocrisy." After all, he demanded, "Are the great principles . . . embodied in that Declaration of Independence extended to us?" In 1852, the answer was obviously no. But Douglass's argument was not that Jefferson, the Declaration, and the Fourth of July should be thrown out with history's trash. It was that the "great principles" for which they stood should be extended to all Americans.

Jefferson, for all his moral failings, authored the document that gave the foes of slavery and, later, Jim Crow, one of their most potent weapons in the fight for freedom and civil rights. As for the defenders of slavery, they rejected that document. As Rich Lowry points out in National Review:

It is no accident that [in 1861] the most pernicious expositor of the pro-slavery cause, Alexander Stephens, loathed Thomas Jefferson and was keen to cast the Confederacy as having been founded upon "exactly the opposite idea" to those "entertained by him and most of the leading statesmen at the time of the formation of the old constitution."

Or, to put it another way: What was remarkable about Jefferson was not what he had in common with his contemporaries around the world, but what he did not.

I have proposed a two-part test for determining when it is right to remove from a public place of honor a statue or monument to some historical person: (1) Was that person honored for unworthy or indecent behavior? (2) Is that person known today primarily for unworthy or indecent behavior? When the answer to both is no, the statue or monument should stay.

By that test, as I wrote last year, "every memorial that glorifies leaders and generals of the Confederacy should be hauled away. The cause for which they struggled was the vilest cause in American history: the perpetuation of African slavery. They were extolled because they went to war in defense of human bondage. Monuments to such men should have no place in our public square."

But that's a far cry from retroactively dishonoring someone whose life was largely admirable, if imperfect. Even great people can have lamentable flaws, especially when viewed in retrospect. Rarely is it wise or fair to let the flaw nullify the greatness, and never is it "nuanced."