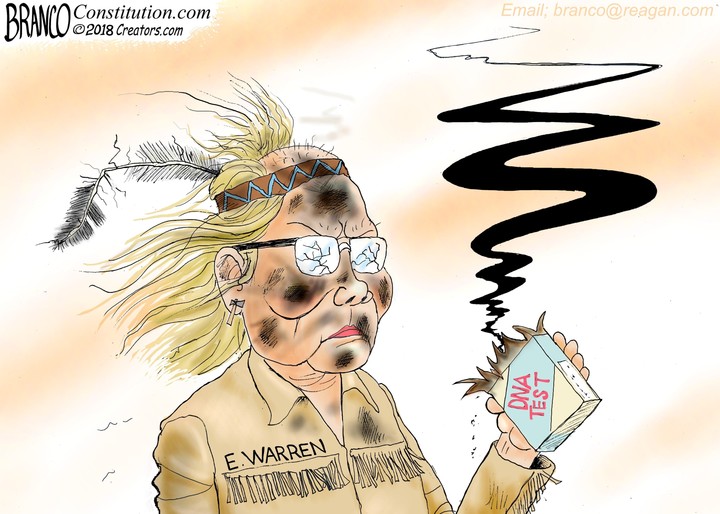 On Monday, Senator Elizabeth Warren released the results of a DNA test confirming what everyone already knew: The "vast majority" of her genetic makeup is European, but she may have a Native American ancestor in her distant past. That makes her, as Barack Obama once said in a different context, a "typical white person."

According to genetic scholars, the genome of white European-Americans is on average 0.18 percent Native American. The analysis of Warren's DNA, which she submitted to Stanford geneticist Carlos Bustamante, suggests that there was a Native American in her family tree somewhere between 6 and 10 generations ago. That would put the American Indian share of her DNA within a range of 1.5 percent and 0.09 percent — just like millions of other white Americans.

If you're like most people, a sliver of Native American coding in your DNA is no more than a colorful bit of family trivia. The only reason it has been treated as such a big deal in Warren's case is because she herself long ago puffed it up into the claim that she was a racial minority.

"During her academic career as a law professor," recounted The Boston Globe in its story on Warren's DNA test, "she had her ethnicity changed from white to Native American at the University of Pennsylvania Law School, where she taught from 1987 to 1995, and at Harvard University Law School, where she was a tenured faculty member starting in 1995."

For years, Warren had herself listed as "Native American" in directories of law professors. To rebut accusations in 1996 that Harvard's law school faculty was insufficiently diverse, a university spokesman identified Warren as a Native American woman. The Fordham Law Review described her as Harvard Law's "first woman of color." These and other fabulations — and Warren's defensive doubling-down when they were reported — became an issue in her US Senate race in 2012. Now they're an issue all over again as she prepares to run for president in 2020.

Having a dab of American Indian ancestry doesn't make Warren an American Indian, any more than having a Viking or Charlemagne in her family tree — you probably do, too — makes her a seafaring Norse warrior or a royal highness. Warren's meticulously choreographed DNA rollout doesn't prove that she is a proud Cherokee-American, as Cherokee activists and tribal authorities have adamantly pointed out. Genetics determine only biology — not social identity or culture or tradition.

The racist trope that a man was black if he had "one drop" of African blood was a pillar of segregation in post-Reconstruction America. US Census enumerators used to subdivide Americans into pseudo-scientific racial classifications — "white," "Negro," "mulatto," "quadroon," "octoroon." Those labels rightly make us cringe today.

The Warren DNA hype is just one more manifestation of the whole rotten business of judging or valuing people on the basis of race. Whether you love Warren or loathe her should depend on her ideas and ideals, her deeds and words — not on her genetic ancestry. Professors and senators, like plumbers and stockbrokers, should be selected or rejected because of their abilities and the quality of their work. The color of their skin, the shape of their eyes, and ethnicity of their ancestors shouldn't even enter into the equation.

On the same day Warren released her DNA results, a federal judge in Boston began hearing a lawsuit challenging Harvard's admissions policies, which pretty clearly measure applicants of different races with sharply different yardsticks. Those policies are defended in the name of "diversity" and "outreach," but they are the fruit of the same odious philosophy that justified "octoroon" as a Census category or celebrated Warren as Harvard Law School's "first woman of color."

Two generations ago, great champions of civil rights like Thurgood Marshall argued that "classifications and distinctions based on race or color [should] have no moral or legal validity in our society." As it was wrong then to allocate a seat on a bus because of race, it is wrong now to allocate a spot in the freshman class because of race — and wrong always to pin "diversity" to a strand of DNA.