Who will defend Iraq's courageous peacemakers? 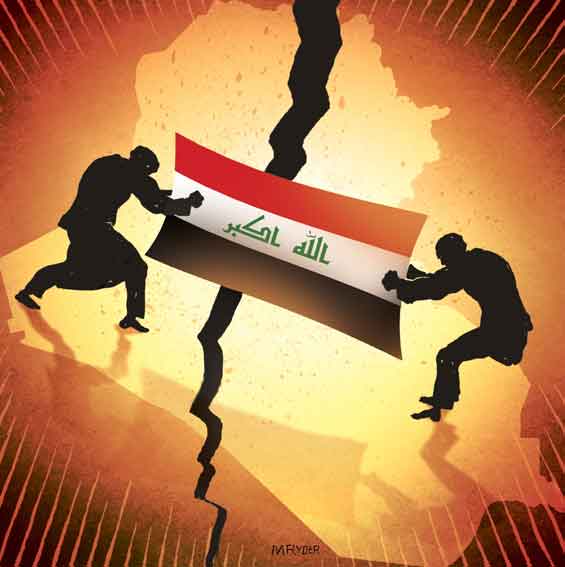 In Iraq, the government has issued arrest warrants for at least six prominent citizens, and individuals associated with them have been fired from their jobs.

At checkpoints near Baghdad and Anwar province, paramilitary groups have put up giant posters with pictures of the six, denouncing them as traitors. An Iranian-backed militia, the Guardians of Blood Brigade, vows to murder them with smart missiles and drones. What ghastly offense did the "traitors" commit?

They urged their government to make peace with Israel.

On Sept. 24, in the Kurdish city of Erbil in northern Iraq, more than 300 tribal leaders, academic scholars, and civil activists gathered in a hotel ballroom. They had come from across the country — men and women, Sunnis and Shi'ites — to call for Iraq to become a party to the Abraham Accords and establish diplomatic, cultural, and economic relations with Israel. It was a wonderful and uplifting event, an endorsement of peace in a nation that has experienced far too much war.

One year earlier, almost to the day, Israel, Bahrain, and the United Arab Emirates had signed the historic accords, in which they pledged mutual friendship and cooperation. Soon thereafter, the circle of peace widened to include two more Arab countries, Morocco and Sudan. Now here were some of the leading citizens of Iraq, publicly adding their voices to the growing chorus of Arabs who seek to replace decades of blind hostility toward the Jewish state with goodwill and neighborly coexistence.

"For the sake of peace in the region, it is imperative to recognize Israel as a friendly country," declared Sahar al-Tai, the Iraqi Ministry of Culture's director of research, "especially since half a million Israelis are of Iraqi origin [and] their eyes are still turned towards Iraq, like a mother longing for her children." To applause, she emphasized that there is no contradiction between making peace with Israel and advocating for the Palestinians. On the contrary, "we see peace as the one and only way to enable the Palestinian people ... to provide opportunity for a better life for future generations."

Another speaker at the conference, which was coordinated by the US-based Center for Peace Communications, was Sheikh Wissam al-Hardan, the head of Sons of Iraq Awakening, a notable Sunni movement. He hailed the "hopeful trend in the region — an expanding community of peace, economic development, and brotherhood that is the framework of the Abraham Accords." The Arab world and its people have a choice, said Hardan: "tyranny and chaos on the one hand" or an emerging alliance of "legality, decency, peace, and progress on the other." Condemning as "morally repugnant" Iraq's longstanding "anti-normalization" policy, which makes it a crime to advocate peace with Israel, he pledged to work for full diplomatic and civil engagement between the two countries.

For Americans, nothing is easier than to call for peace between Arabs and Israelis, but to do so in Iraq is fraught with danger. Predictably, the forum in Erbil enraged Iran and its local proxies, who wield enormous influence in Iraqi politics. The blowback was instantaneous and ferocious. Tai was fired from her Ministry of Culture position. Arrest warrants were issued for Hardan and his son, and the sheikh was forced to recant his speech. Iranian-backed militias called for the death of the conference attendees. Iraq's president, Barham Salih, unwilling to incur Tehran's wrath, joined in the denunciations.

For one brief shining moment, Iraq's would-be peacemakers gave the world a glimpse of a Middle East not poisoned by the hatred of Jews and the Jewish state. Then they were shouted down by the haters.

Where is America's voice in all this? Just weeks ago, US diplomats were celebrating the first anniversary of the Abraham Accords, celebrating them as an exceptional achievement that they intended to expand. "This administration," Secretary of State Antony Blinken said firmly, "will continue to build on the successful efforts of the last administration to keep normalization marching forward."

Yet from the State Department and the White House there has been only silence. Instead of extolling the Erbil conference and defending its pro-peace participants, the US government has said virtually nothing. The US military spokesman in Iraq tweeted a brush-off: American officials "had no prior knowledge of the event, nor do we have any affiliation with its participants."

It took exceptional courage for those Iraqi men and women to assemble publicly and plead for an end to hatred. It would take none at all for America's leaders to openly support them. When brave peacemakers step forward, shouldn't the United States be counted on to stand with them?