Disney thanks the dictators 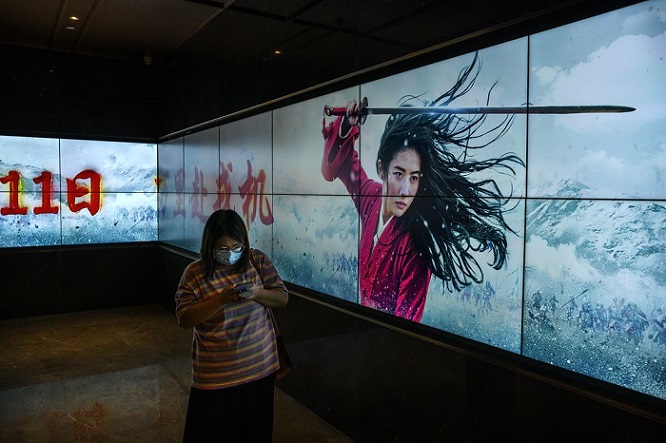 Disney filmed 'Mulan' in a region where genocidal acts are being committed by China's government.

I don't subscribe to Disney Plus. But even if I did I wouldn't spend $29.99 to view Disney's ballyhooed remake of "Mulan."

According to critics who have seen it, the $200 million picture is a mediocre piece of moviemaking. It reflects "a timid and studied thematic emptiness, an avoidance of any specific ideas or questions that might upset anyone, anywhere, at all," writes Reason's Peter Suderman. "Mulan fights for honor, for family, for finding herself and owning her power, which is to say she fights for vague and inoffensive banalities." In the Wall Street Journal, critic Joe Morgenstern calls it "earnest, often clumsy and notably short on joy," and concludes that "the film as a whole lacks the clarity of its animated predecessor, not to mention the earlier version's gleeful showmanship, gorgeous design, and vastly wider emotional range." Joshua Rivera, reviewing "Mulan" for The Verge , says it "feels like an anticlimax. . . . [It is] merely a serviceable film that's rather easy to forget."

The real problem with "Mulan," however, isn't its artistic failings, but its moral callousness.

Unlike Disney's 1998 original, a key theme of which was self-determination and personal freedom, the remake heavily emphasizes the virtue of loyalty to family and community. In China, where the movie is set, loyalty is also a heavily stressed value — loyalty to the state and to the ruling Communist Party. It is not by coincidence that the new "Mulan" reinforces a doctrine so important to the Chinese dictatorship: Disney collaborated with Chinese authorities in making the film.

The company "worked closely with China's government, all the while striving to present a main character and story line faithful to Chinese values," reported the Wall Street Journal earlier this month. "To avoid controversy and guarantee a China release, Disney shared the script with Chinese authorities while consulting with local advisers."

There is no indication that anyone connected with the movie objected to toeing China's Communist Party line. When pro-democracy protesters were being brutally assaulted in Hong Kong last year, the star of the new movie, Chinese-born American actress Liu Yifei, publicly supported the security police suppressing the protests . That was appalling. But it was nothing compared to the discovery that "Mulan" was filmed within hailing distance of China's Uighur concentration camps, and that in the credits at the end of the film, Disney thanks China's rulers for the privilege.

Those credits, wrote Isaac Stone Fish in The Washington Post, are "the most devastating" thing about the movie:

Disney filmed "Mulan" in regions across China (among other locations). In the credits, Disney offers a special thanks to more than a dozen Chinese institutions that helped with the film. These include four Chinese Communist Party propaganda departments in the region of Xinjiang as well as the Public Security Bureau of the city of Turpan in the same region — organizations that are facilitating crimes against humanity. It's sufficiently astonishing that it bears repeating: Disney has thanked four propaganda departments and a public security bureau in Xinjiang, a region in northwest China that is the site of one of the world's worst human rights abuses happening today.

More than a million Muslims in Xinjiang, mostly of the Uighur minority, have been imprisoned in concentration camps. Some have been released. Countless numbers have died. Forced sterilization campaigns have caused the birth rate in Xinjiang to plummet roughly 24 percent in 2019 — and " imposing measures intended to prevent births within the group" fits within the legally recognized definition of genocide. Disney, in other words, worked with regions where genocide is occurring, and thanked government departments that are helping to carry it out. . . .

Why did Disney need to work in Xinjiang? It didn't. There are plenty of other regions in China, and countries around the world, that offer the starkly beautiful mountain scenery present in the film. But in doing so, Disney helps normalize a crime against humanity.

So what else is new? For years, Disney and other studios have kowtowed to Beijing, subtly and not-so-subtly adjusting the content of their movies to satisfy the demands of the world's foremost communist regime. In a recent report , PEN America, a nearly 100-year-old organization that champions human rights and fights against threats to freedom of expression, condemned Hollywood studios for "increasingly making decisions about their films — the content, casting, plot, dialogue, and settings — based on an effort to avoid antagonizing Chinese officials who control whether their films gain access to the booming Chinese market."

There are numerous ways in which Hollywood "compromises on free expression," says PEN:

[C]hanging the content of films intended for international — including American — audiences; engaging in self-censorship; agreeing to provide a censored version of a movie for screening in China; and in some instances directly inviting Chinese government censors onto their film sets to advise them on how to avoid tripping the censors' wires. . . . Steadily, a new set of mores has taken hold in Hollywood, one in which appeasing Chinese government investors and gatekeepers has simply become a way of doing business.

Needless to say, US moviemakers have no hesitation about portraying American leaders, attitudes, or history in unflattering ways. In PEN's trenchant observation,

Hollywood enjoys a reputation as a place uncowed by Washington, and one that is often gleefully willing to speak truth to American political power. This reputation contrasts strangely but silently with Hollywood's increasing acceptance of the need to conform to Beijing's film dictates.

Disney and other studios are private companies, free under the Constitution to promote any message they like. But their willingness to truckle to Chinese censors has a terrible impact on the freedom of others.

Beijing's influence over Hollywood . . . cannot be ethically decoupled from the Chinese government's practices of suppressing freedom of expression at home. Beijing enforces one of the world's most restrictive censorship systems, in which films and other creative endeavors are subject to a strict process of pre-publication review by the State. China's media is similarly under state control. . . . Vast categories of protected expression are criminalized, with peaceful dissidents serving years-long jail terms for their critical speech.

Independent civil society does not exist within mainland China, and the country's Great Firewall represents the world's most advanced and expansive system of digital censorship. In the areas of Tibet and Xinjiang, the repression of civil rights is breathtakingly severe; in Xinjiang especially, it is no exaggeration to say that millions of Uyghurs and other ethnic minorities are in detention camps or jail because the government has essentially criminalized their cultural and religious expression in the region. . . . Beijing's imposition of near-total barriers to access for Western reporters in those regions, meanwhile, helps ensure that this narrative is unchallenged.

In short, the Chinese government works tirelessly to ensure that the only stories told within China are ones that it specifically approves. Beijing's influence over Hollywood is part of this work.

So when Disney goes out of its way to thank Chinese government propaganda agencies and the public security department in Xinjiang, anyone with a functioning conscience should be nauseated. Disney's Chinese partners in the making of "Mulan" are literally engaged in genocide and its attendant atrocities. For a parallel, imagine a Hollywood blockbuster filmed in 1930s Germany that made a point of thanking the Reich Ministry of Propaganda and Public Enlightenment in the on-screen credits.

Once, Disney had more backbone. In 1996, the studio produced "Kundun," a movie about the life of the Dalai Lama. The spiritual leader of Tibetan Buddhists, the Dalai Lama is reviled by the Chinese government, which routinely blackens his reputation and has made it a crime even to display his photograph. Beijing was enraged that Disney had made the movie, and vehemently insisted that it not be released.

But in those days, Disney knew how to face down communist dictators. It announced that the movie would be shown in the United States as planned, China's threats notwithstanding. "We have an agreement to distribute â€˜Kundun' domestically," Disney's spokesman said, "and we intend to honor it."

When China retaliated by restricting Disney's access to China, however, the company abruptly shed the backbone it had briefly grown. "We made a stupid mistake in releasing â€˜Kundun,'" then-CEO Michael Eisner told Premier Zhu Rongji in October 1998.

"The bad news is that the film was made; the good news is that nobody watched it," Eisner added. "Here I want to apologize, and in the future we should prevent this sort of thing, which insults our friends, from happening."

To repeat: Such bootlicking should nauseate anyone with a working conscience.