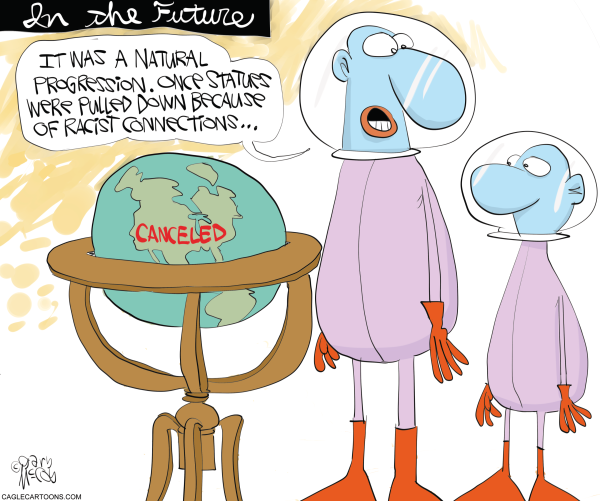 The racial Jacobins haven't eased up in their post-George Floyd ferocity; if anything they are growing more indiscriminate in their determination to enforce political conformity and to punish anything they regard as thoughtcrime.

Their targets haven't been limited to statues of American heroes, editors of prominent newspapers, or professors at leading universities. The toll of those who have been defamed, fired, or otherwise "cancelled" now includes an alarming number of people who have no power or public platform, who are not celebrities, and who in many cases did nothing wrong.

Take the case, for example, of Emmanuel Cafferty, a Hispanic employee of San Diego Gas and Electric, who was fired for making a "white supremacist" gesture while driving his company-issued truck. Except that he wasn't making any gesture at all, and didn't even know that such a symbol existed.

Here's the story, as reported by San Diego's NBC affiliate:

It all started about two weeks ago near a Black Lives Matter rally in Poway when Emmanuel Cafferty, a San Diego Gas and Electric employee, encountered a stranger on the roadway. The stranger followed Cafferty and took a picture of him as his arm hung out the window of his company truck.

The picture made the rounds on Twitter, accompanied by a claim Cafferty was making a "white power" hand gesture made popular by white supremacist groups.

According to the Anti-Defamation League, the gesture — made by forming a circle with the thumb and index finger, and extending and separating the other three fingers — has been used in recent years by white supremacists to form the letters W and P, but has also long been used as a sign signifying "OK" . . . . Therefore it shouldn't be assumed to be a white supremacy symbol unless there is other evidence to support those claims, according to the ADL. Cafferty claims he was just cracking his knuckles.

Soon after the encounter, a supervisor of Cafferty's told him he was suspended and that further action may be taken after an investigation. A few days later, he says he was fired.

Cafferty was astonished when his employer told him what he had been accused and found guilty of. Not only had he been denounced and fired for a supposedly racist act, his judge, jury, and executioner were all white, and he isn't. Yascha Mounk dug further into the case for The Atlantic:

[Cafferty] said he explained to the people carrying out the investigation . . . that he had no earthly idea some racists had tried to appropriate the "okay" sign for their sinister purposes. He told them he simply wasn't interested in politics; as far as he remembered, he had not voted in a single election. Eventually, he told me, "I got so desperate, I was showing them the color of my skin. I was saying, 'Look at me. Look at the color of my skin.'"

It was all to no avail. SDG&E, Cafferty told me, never presented him with any evidence that he held racist beliefs or knew about the meaning of his gesture. Yet he was terminated.

Meanwhile, the guy who took the picture of Cafferty's fingers deleted his tweet, admitted that he may have "misinterpreted" what he saw, and said he never intended for Cafferty to lose his job. But these days, the merest suggestion that someone is a bigot, or insufficiently antiracist, can trigger the instantaneous destruction of his or her reputation, career, and income.

Mounk describes the fate of a liberal statistician working for a left-wing firm:

David Shor, for example, was until recently a data analyst at a progressive consulting firm, Civis Analytics. . . . Shor's job was to think about how Democrats can win elections. When Omar Wasow, a professor at Princeton, published a paper in the country's most prestigious political-science journal arguing that nonviolent civil-rights protests had, in the 1960s, been more politically effective than violent ones, Shor tweeted a simple summary of it to his followers.

That was all it took to wipe out Shor's job, writes Mounk. Various agitators on Twitter demanded that he be terminated. He had done nothing more than flag a piece of research raising questions about the effectiveness of violent protests. Yet within a week of posting an accurate tweet about the findings of Wasow — a black PhD in African-American studies — Civis Analytics fired Shor. Even Wasow's wife was appalled by the crazed attack on a fellow progressive who had done nothing to deserve such a fate.

Then there is the attack on a middle-aged woman named Sue Schafer who attended a Halloween party in 2018, wearing blackface and a tag reading "Hello, My Name is Megyn Kelly." It was a mocking reference to the former TV host, who ran into a buzzsaw after she suggested that wearing blackface wasn't always racist or in bad taste. Two young women at the party approached Schafer — who was not famous, not running for office, not influential — and berated her for her costume. She left the party in tears. Which would have been the end of it, except that The Washington Post, for no discernible reason, ran a 3,000-word article about the incident this month — a story, wholly devoid of news value, about a clueless woman at a party two years ago. As soon as the story appeared, Schafer was fired by her employer.

Even children are being targeted as racist, with the encouragement of adults who explicitly call for the destruction of the kids' future prospects.

Skai Jackson, a former Disney Channel star, urged her young social media followers to expose their classmates or peers for posting racist comments or videos. "If you know a racist, don't be shy! Tweet me the receipts," Skai tweeted on June 4. On Instagram, she posted a similar threat, saying she would spotlight "Caucasian teens" who say or write something inappropriate: "Let me say this: If I see you post it, I WILL expose you!! If you think you're big and bad enough to say it, I will most definitely put your own words on blast!!"

What followed, predictably enough, was a flood of submissions from informers eager to publicly accuse young people of racism, sometimes expressed in online remarks years ago. Jackson readily publicized the accusations, making sure to include the targets' full names and social-media handles. And for going out of her way to ruin the reputation of people for being young and foolish, she was extolled as a heroine. Entertainment Tonight hosts applauded Jackson's "bold move" in ensuring that "justice can be served." Essence magazine commended her for "using this time to reverse the blatant racism she's seen on social media."

"I am so proud of you, @skaijackson," tweeted actress Yvette Nicole Brown. "The good work you're doing exposing all these 'baby' racists will ensure that their names, faces & deeds will be known as they enter the work force down the line. Which will protect everyone from the havoc racists cause in the workplace."

This is chilling and dystopian, the perversion of a legitimate goal — overcoming racial bigotry — into a frenzy of character assassination and public humiliation.

"Some of the targets of these campaigns may have spoken or acted clumsily, but apologists for cancel culture can find reasons to stigmatize or banish anyone," observed the Wall Street Journal in an editorial last week:

We doubt most Americans agree with this unforgiving and punitive approach to cultural change, but the revolutionaries are now in charge with a vengeance. They won't stop by themselves because their campaign is essentially about power and control, and they need new villains. But . . . they are also laying waste to liberal values of free speech, democratic debate, and cultural tolerance.

A backlash to the Jacobins' brutality will come sooner or later.

It was 66 years ago this month that the tide finally began to turn against Joseph McCarthy, the Wisconsin senator whose anticommunist crusade was marked by a similar willingness to blow up reputations and shred careers. The moment came during the McCarthy's televised hearings on supposed communist influence in the US Army, when he gratuitously singled out by name a young Boston lawyer, implying that he was a secret communist and a security threat to the United States.

Joseph Welch, a Boston attorney who served as chief counsel for the Army during the hearings, seized on McCarthy's smear to turn the tables:

"Until this moment, Senator, I think I have never really gauged your cruelty or your recklessness," Welch said. He praised the young lawyer who had been slandered, then rebuked McCarthy with words that still resonate:

Like resistance to communism, resistance to racial bigotry is a worthy and legitimate cause. But there is nothing legitimate about demonizing the powerless and destroying lives with reckless accusations. What has been done to Cafferty and Shor and too many others is stomach-turning. Have those who target such powerless people have no sense of decency? At long last, have they left no sense of decency?