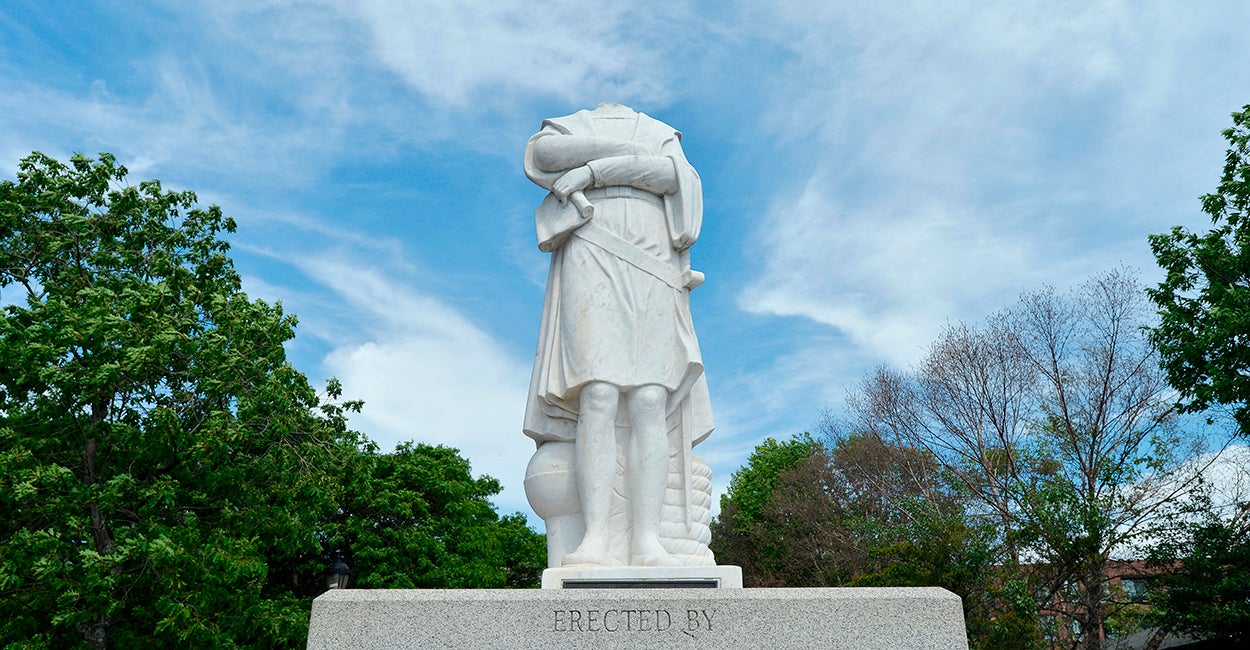 Boston's Christopher Columbus statue after it was attacked last week by vandals.

Not for the first time, the statue of Christopher Columbus on Boston's North End waterfront was badly vandalized Tuesday night: Its head was knocked to the ground. In the past, the statue has always been repaired and restored, but this time the vandals will get their way. Mayor Marty Walsh told reporters on Wednesday that the damaged monument will be removed indefinitely, so that, "given the conversations that we're having right now," officials can "take time to assess the historic meaning of the statue." I'm guessing the statue won't be coming back.

A second Columbus statue was attacked Tuesday night: The one in Richmond, Va., was spattered with paint, pulled off its pedestal, set on fire with an American flag, and dumped in a lake. On Wednesday, American Indian activists in St. Paul, Minn., toppled a third statue of Columbus, whereupon the state's lieutenant governor tweeted that "native children . . . might now feel more welcome" on the grounds of the state capitol.

Elsewhere, other statues have been defaced or attacked. In numerous US cities, memorials to Confederate leaders became targets. Many were damaged or overturned by protesters, while others were preemptively removed by local officials. In Bristol, England, a statue of the merchant, philanthropist, and slave trader Edward Colston was toppled by Black Lives Matter protesters and thrown in the city's harbor. A monument to Belgium's King Leopold II was removed by officials in Antwerp after it was set on fire during an anti-racism rally. Statues in London of Abraham Lincoln, Winston Churchill, and Mahatma Gandhi were spray-painted with graffiti; the same thing happened to the Gandhi statue at the Indian embassy in Washington.

Back in Boston, meanwhile, the desecration of public art went way beyond the Columbus sculpture. Sixteen statues and memorials were defaced, broken, or otherwise vandalized. Among them was the great Saint-Gaudens bronze relief on Beacon Hill honoring the 54th Massachusetts Regiment, the renowned African American infantry unit that fought in the Civil War.

There are two issues here to contend with.

One ought to be straightforward: The disposition of public art and public spaces should not be settled by mob action. The wanton and malicious destruction of public property is a crime, and refusing to prosecute serious vandalism is tantamount to inviting more of it. The case for getting rid of a statue may be entirely compelling; but the issue shouldn't be decided by the impulse of an angry crowd. Militant activism is a dangerous substitute for the democratic process, and almost inevitably goes too far.

But the deeper issue — when is it appropriate to purge statues and monuments that people find offensive? — is less clear-cut.

Plainly there will be instances where the case for removing a statue or other form of public acclaim (such as the name of a street or building) is compelling; there will be other instances where the case for not doing so is equally irresistible. A good example of the former is Leopold II, who was reviled even in his own day for his ghastly crimes against humanity in the Congo, and who is remembered today for almost nothing else. Good examples of the latter are the statues of Lincoln, Churchill, and Gandhi, who — however unenlightened some of their racial views by 21st-century standards — were towering figures of extraordinary importance who indisputably changed the world for the better.

But often the issue won't be as easy, because there are strong arguments both ways.

Consider Columbus. He was without doubt a man of enormous flaws — a greedy and ambitious zealot who could behave with great cruelty. Many of the Spaniards he led to the New World were brutal in their treatment of the indigenous people they encountered. But Columbus was also a mariner of incandescent skill, and he propelled the human story forward as few men or women ever have. His "journey changed the trajectory of our world," in Barack Obama's words, for he brought with him not just the most debased of 15th-century European values, but also the most lofty — the quest for knowledge, a spirit of discovery, and a commitment, however theoretical, to justice and human brotherhood. Almost from the moment Europeans set foot on American soil, some among them cried out in protest at the abuses committed by their kinsmen.

How should we decide when it's appropriate to remove a statue or monument to some person from a public place of honor? I argue for a two-part test: (1) Was that person honored for unworthy or indecent behavior? (2) Is that person known today primarily for unworthy or indecent behavior? When the answer to both is no, the statue or monument should stay.

By that test, every memorial that glorifies leaders and generals of the Confederacy should be hauled away. The cause for which they struggled was the vilest cause in American history: the perpetuation of African slavery. They were extolled because they went to war in defense of human bondage. Monuments to such men should have no place in our public square.

But that doesn't mean the public square must be stripped of any statue or tribute to someone who was flawed. All great men and women fall short of perfection, especially when scrutinized by the standards of later eras. We can acknowledge their blemishes without denying their greatness.

There is nothing wrong with vehemently debating whether a historical figure deserves to be honored. Removing statues — like renaming streets or military facilities — is not, as some people complain, tantamount to "erasing history." Sometimes it's tantamount to correcting history. History's verdict isn't immutable, and society is entitled to change its mind about whom to celebrate.

But that verdict should be rendered by the people, acting through their government, not by vandals taking matters into their own hands. The fate of the Columbus statue was well worth debating. Whoever struck its head off cheated us all.