Non-diversity and the spelling bee 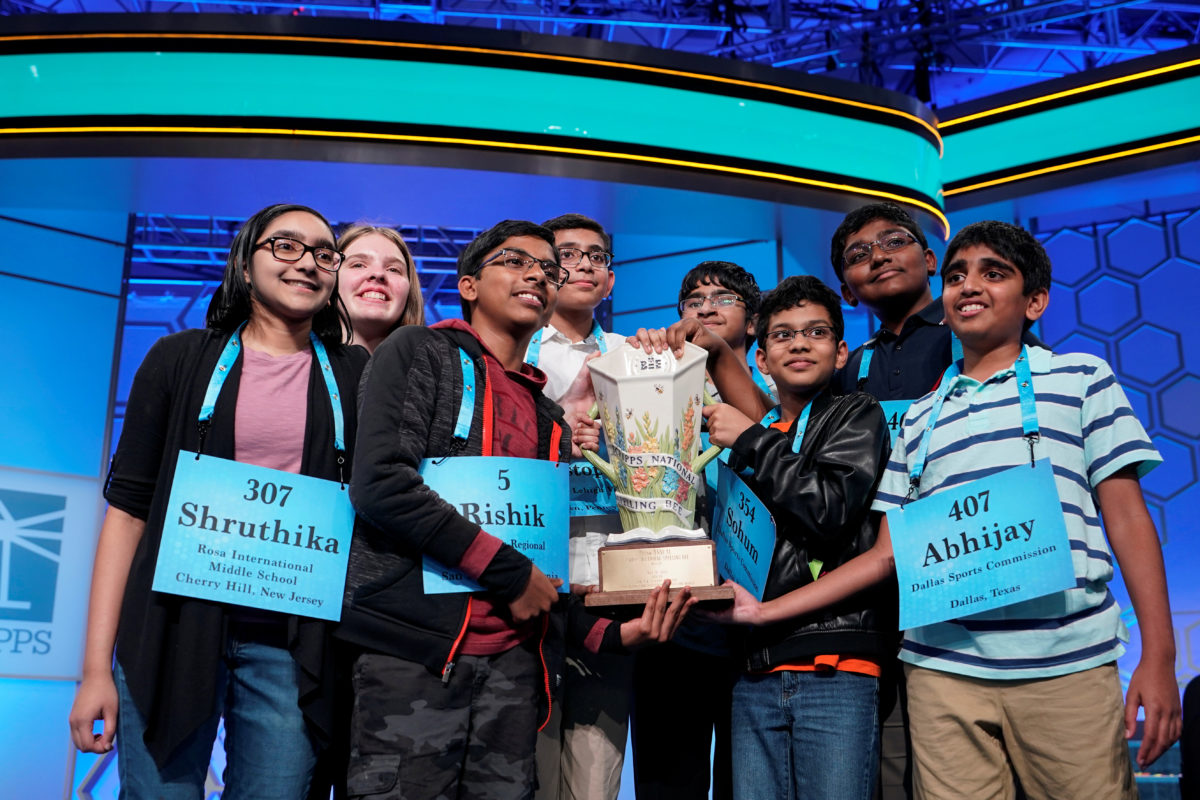 The Scripps National Spelling Bee makes news every year, but this year's competition was epic: For the first time ever, it ended with not one spelling champion or even two co-champions, but with eight winners. Winnowed down from 562 starting contestants, the final eight spellers had proved unconquerable through 20 rounds. "We're throwing the dictionary at you," said Jacques Bailly, the Spelling Bee's official pronouncer, "and so far, you are showing this dictionary who is boss."

That was after the 17th round. Three rounds later, all eight contestants were still in the running — and the judges had run out of challenging words. Whereupon they ruled that each member of what Bailly called "the most phenomenal assemblage of super-spellers" in the Bee's history would take home a first prize trophy and an accompanying $50,000 check.

These were the winners, along with the final word each spelled correctly:

In case a glance at the kids' names doesn't make it obvious, all but one of the champions is of Indian descent. Since 1999, the children of immigrants from South Asia have usually crushed the world's most prestigious spelling bee. Is that a problem? Should we be lamenting the lack of diversity in the top ranks of competitive student spellers? Ought Scripps and ESPN (which broadcasts the annual spelling bee) manipulate the rules — the way Harvard, for example, has manipulated its admissions standards — to ensure that more non-Asians make it to the final rounds?

Indian-American kids haven't become the royalty of competitive spelling because their race or color gives them an advantage. There is no "Asian privilege" that explains the failure of white, black, or Latino kids to capture the trophy. Awesome spelling skills aren't coded in DNA from the Indian subcontinent. High-level spelling competition is a meritocracy; the only way to win is by spelling more words correctly than any other player. And the only way to get that good at spelling rare and difficult words is to work at it — hard.

Many Indian American children devote extraordinary time and effort to training for spelling bees: They memorize word lists, study etymology, familiarize themselves with prefixes and roots, take guidance from coaches, and compete in regional contests.

"The training regimen can be ruthless," Kodali told CNN. "I study like four to five hours on weekdays. But when the competition became near, I ramped it up and I studied as much as I could, maybe like an extra one or two hours, and 10 hours on the weekends."

Such rigor, diligence, and patience has nothing to do with genetics or superficial "diversity." It has everything to do with motivation. And what fuels that motivation is a combination of culture, social expectations, family encouragement, and ethnic solidarity. "Spelling bees have become a vital part of the Indian American experience," anthropologist Shalini Shankar has written. "There is community prestige in placing competitively in spelling bees and great familial pride for having participated in something so challenging at a young age." Nor does it hurt that many of "these young word nerds," as Shankar calls them, have a "vast social network of friends who also love spelling."

The disproportionate success of Indians in world-class competitive spelling ought to elicit only admiration. But there's no denying that it flies in the face of America's vast diversity-industrial complex, which endlessly reinforces and endorses a great fallacy: that statistical disparities between racial and ethnic groups, or men and women, are proof of invidious discrimination and inequality.

Bigotry and injustice are only too real, of course, but they have no more to do with the dominance of Indians in spelling competitions than with the dominance of Kenyans in distance running, or of Russians in chess, or of African Americans in the NBA. Or, for that matter, of men in commercial fishing and logging. Or of women in veterinary medicine and child care. Or of Southerners in military service, or of Jews among Nobel laureates, or of Catholics on the Supreme Court, or of any of a thousand-and-one other examples that could be shown of extreme statistical disparities among categories of people.

What is true of high-stress spelling bees is true of workplaces and investments and college applications and entertainment: People do not randomly sort themselves out by color, background, and sex. Group disparities are not, as a rule, evil. They are normal, the result of a myriad of human choices, preferences, interests, and motivations.

The Scripps Spelling Bee "octo-champs" are amazing spellers who worked fantastically hard to achieve something wonderful, for which they deserve applause and admiration. True, they aren't a diverse amalgam of races, colors, and ethnicities. Who cares?