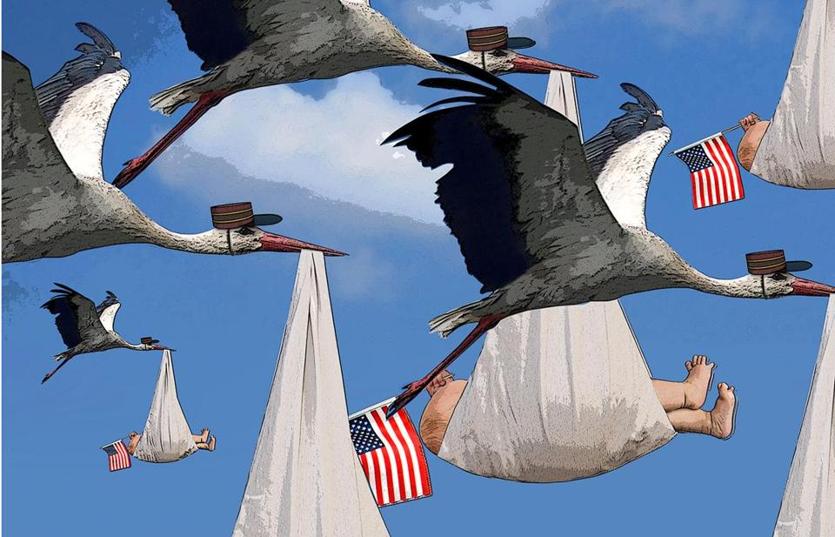 From the National Center for Health Statistics came some disturbing news last week: The US birthrate, which has been on the skids for a decade, hit another record low.

About 3.85 million babies were born in the United States in 2017. That was down from 3.95 million births in 2016, which in turn was down from 3.98 million in 2015. For every 1,000 American women of childbearing age, there were just 60.2 births last year, the lowest birthrate ever recorded. A related yardstick is the fertility rate — the number of babies each woman, on average, will have over her lifetime. It takes a fertility rate of 2.1 just to keep a nation's population stable, neither growing nor shrinking. Last year, the US rate dwindled to 1.76, a 40-year low.

Americans are less inclined than ever, it seems, to be fruitful and multiply. That should trouble anyone who hopes that America's best days are yet to come. Nothing is more indispensable to the growth of any society than its human capital — the knowledge, skills, imagination, and energy of human beings. As the late, great economist Julian Simon famously argued, people are the ultimate resource in any society, since human beings over time create more than they destroy.

When nations retreat from marriage and children, their outlook tends to become bleaker and less prosperous. Japan, which has one of the lowest fertility rates in the world, illustrates the phenomenon well. As Japanese births have dwindled, the working-age cohort has accounted for a smaller and smaller share of an older and older population. Economic decline has followed demographic decline. And with Japan's labor force doomed to keep shrinking, the worst is yet to come.

There are many reasons for the plunge in fertility rates, and some of those reasons are unequivocal blessings. First and foremost is the near-eradication of infant mortality. In the 1850s, wrote Jonathan V. Last in his 2013 book What to Expect When No One's Expecting, one-fifth of white American babies, and one-third of black babies, died during infancy. Today, by comparison, the infant mortality rate is minuscule: 5.8 deaths for every 1,000 live births. When children are more likely to survive, parents have fewer children.

Other positive changes have also helped bring down fertility rates. Among them: the explosive increase in women's education, the availability of modern contraception, and the surge of women into the workforce. Added to those have been still other social transformations. The establishment of Social Security and Medicare eroded the need for children to support their parents in old age. The waning of religion in modern America has weakened the conviction that getting married and raising a family are moral imperatives. And the din by environmental alarmists about the dangers of "overpopulation" have convinced many people that childlessness is a virtue.

It should go without saying that Americans are perfectly free to delay getting married or having children, or to decide that they want no part of the expense, commitment, and restrictions of parenthood. This isn't Margaret Atwood's Gilead. Individual men and women who choose not to have kids are exercising a reproductive liberty that most of us regard as inviolable.

Yet that doesn't mean we're obliged to close our eyes to the aggregate impact of those individual choices. A society that ceases to "be fruitful and multiply" is a society that sows the seeds of its own decay. The retreat from child-rearing, in columnist Ross Douthat's words, is a form of "decadence" — an attitude that "privileges the present over the future, chooses stagnation over innovation, prefers what already exists over what might be." A plummeting birthrate has ramifications that go beyond the economic burden of a swelling elderly population and fewer people of working age to bear that burden. To opt out of having children is to opt out of the most meaningful investment in the future — and to thereby make it more likely that America's best days are not to come.

Government can't make people have babies, and shouldn't try to. But that doesn't mean we shouldn't encourage parenthood, or remind ourselves how important babies are to American success, enterprise, and optimism. America's children are its most valuable asset, and a persistently sinking birthrate is a warning: That asset is being dangerously depleted. Life with kids is undoubtedly a challenge. But as America is on the verge of finding out, life without them will be more challenging by far.