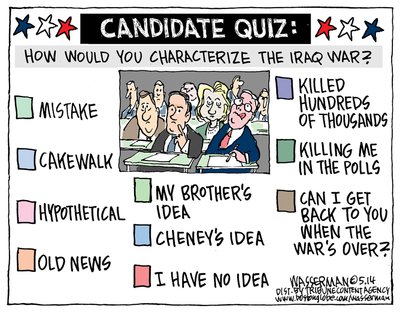 Everyone had a field day with Jeb Bush's mishandling of the Iraq question Megyn Kelly posed during a TV interview last week: "Knowing what we know now, would you have authorized the invasion?" Over the course of several days, Bush's answer switched from a firm yes ("I would have") to a firm no ("I would not have gone into Iraq"). Other GOP presidential hopefuls, quick to exploit Bush's fumble, quickly declared that in hindsight they wouldn't have gone to war.

Obviously there will be no do-over of the Iraq war authorization; the next president can't hop a time machine back to 2003. But even as a theoretical exercise, it's impossible to answer Kelly's question without clarifying the meaning of "knowing what we know now."

Was Bush being asked whether he would have invaded Iraq, knowing how the invasion was destined to play out over the next 12 years? Or was he being asked whether he would have invaded Iraq, had he known what mistakes to avoid in order to achieve the most successful outcome? If the former, then the question was whether the war on balance was worth its costs. If the latter, it was whether, in retrospect, the war and its aftermath could have been managed more successfully. Those are very different queries, to which a thoughtful candidate might well give very different answers.

But why revisit only 2003? As long as we're asking presidential contenders what lessons they draw from George W. Bush's decision — widely supported at the time, remember — to topple Saddam Hussein, why not ask whether, "knowing what we know now," they would repeat other historical presidential decisions.

Would the men and women campaigning for president today have signed the Iraq Liberation Act, as President Clinton did in 1998, thereby making Saddam's removal from power a matter of explicit US policy?

With 20/20 hindsight, would they have ended the Gulf War after just 100 hours, as President George H. W. Bush did in 1991? Would they, like the first President Bush, have explicitly encouraged the Iraqi people to overthrow Saddam — but then, when Kurds and Shi'ites heeded his call, done nothing to stop the dictator from savagely crushing the uprising?

Or take the more recent decision, by President Obama in 2011, to pull all American troops from Iraq, rather than negotiate a new Status of Forces agreement to maintain a substantial US military presence. That wholesale withdrawal — which was also widely supported at the time — created a vacuum that ISIS and Iran have filled with blood and terror. Knowing what we know now, would the candidates have brought those troops home?


History is always messy, especially the history of wars and their aftermath. Intelligence failures, battlefield misjudgments, diplomatic fiascoes, wavering public opinion — these have played a role in nearly every conflict, including those we recall with approbation. Rarely does the decision to fight proceed as expected. The same is true of the decision not to fight.

World War II, the "good war," the war to liberate Europe from Adolf Hitler, ended with America acquiescing in the enslavement of Eastern Europe by Joseph Stalin. The Civil War was envisioned as a quick and decisive Northern campaign to put down a Southern rebellion; it turned into grinding, appalling four-year bloodbath.

President Reagan chose to withdraw rather than retaliate after US Marines on a peacekeeping mission in Lebanon were killed by Hezbollah and its Iranian sponsor. That was a signal of weakness that helped convince Osama bin Laden to regard America as a vulnerable "paper tiger," with awful results.

By all means, let's grill presidential candidates on what lessons they've learned from history, and how it informs their approach to national security today. Let's also remember that politicians always find it easy to tell us how blunders could have been avoided in the past. They're not nearly so adept at avoiding them in the present.