The trade deficit is up again. No worries 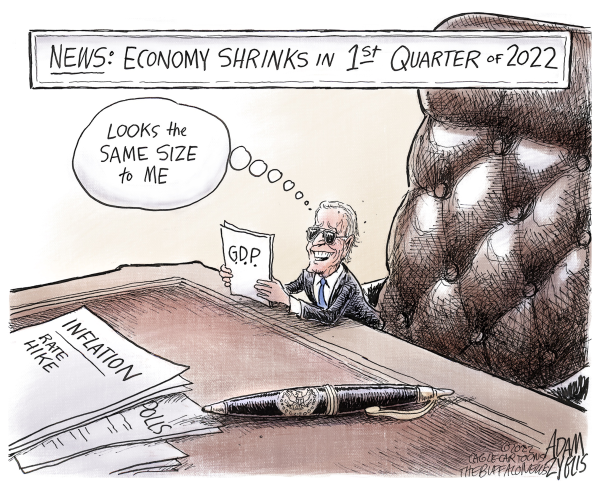 The US trade deficit hit an all-time high in March, widening to nearly $110 billion as the nation imported considerably more goods than it exported. That can't be good, right?

Actually, it's fine. But you wouldn't know that if you take your cues from the media.

In the narrowest, most literal sense, the Times is right: When the Commerce Department calculates GDP, it adds up all domestic consumption and investment. Then it subtracts imports, which, by the most simplistic definition, are not part of America's domestic product. So in terms of the equation used to calculate GDP, it is true that the larger the trade deficit — i.e., the more imports outweigh exports — the lower the official value of America's domestic economy.

That's merely an accounting detail, however. It's not an indication of actual economic weakness. It's a bit like removing your shoes before getting weighed at the doctor's office. Subtracting your footwear lets your weight be recorded more accurately, but that doesn't mean that investing in heavy boots causes your weight to drop. Similarly, investing in goods and services imported from abroad is neither a cause nor a symptom of economic decline. Quite the contrary: All things being equal, imports are usually evidence of economic vitality and success.

Imagine an American household with a Japanese car in the garage, whiskey from Scotland in the liquor cabinet, Costa Rican coffee in the pantry, wineglasses from Austria in the kitchen, a laptop from Taiwan on the desk, and a deck built from Canadian lumber in the backyard. The family in that house has a lifestyle that plainly relies on imports. Is that evidence that its fortunes are declining? Obviously not.

Its ability to exchange dollars for such an array of products from around the world is an indication of its economic strength. That family may be running a trade "deficit" with the rest of the planet. So what? That means it is blessed with access to a variety of products it could never create for itself.

What is true for individual families is generally true as well for companies, industries, and countries. Economists explain that more imports — and a wider trade deficit — are not a drag on US growth but the opposite. According to Mark J. Perry of the American Enterprise Institute and the University of Michigan, more than half of all imports are raw materials, capital equipment, or intermediate components, which US manufacturers use to produce new domestic output while employing millions of Americans.

No surprise, then, that increases in the US trade deficit have been broadly associated over the years with rising employment levels.

For all that, most Americans seem to think a growing international trade deficit is a bad thing. In a 2018 poll commissioned by Harvard's Center for American Political studies, for example, more than 70 percent of respondents said the United States should "take steps to reduce the trade deficit with China," even at the risk of driving up consumer prices. Like Donald Trump, many people cannot shake the conviction that a trade deficit is a measure of lost wealth or opportunity.

Pat Buchanan is aghast that the United States "has not run a trade surplus in four decades," proof, to him, that America's "dependency upon foreign producers is unprecedented."

Yet what they see as weakness and loss is nothing of the kind. Our ability to trade with the world — to benefit from the labor, innovation, and production of many millions of foreigners in scores of countries — is an unparalleled engine of American prosperity. The dollars Americans spend on imports aren't "lost." They are exchanged for desirable and affordable goods, services, parts, and commodities that strengthen Americans' economy while elevating their US lifestyle.

Better still, those dollars then come back to the United States, where they are used to invest in American assets or buy American exports, creating even more value and putting even more Americans to work.

Unlike a budget deficit, a trade "deficit" isn't a debt we owe. It is an accounting entry that tells us how much more we were enriched by foreigners than they were by us. In March Americans received $352 billion in foreign-produced goods and services in exchange for just $242 billion in exported American products. The difference — $110 billion — will flow back to the United States as capital for investment.

From surging inflation to snarled supply chains, the US economy has some real problems. Happily, the trade deficit isn't one of them. Imports are good. And more imports? They're good too. =