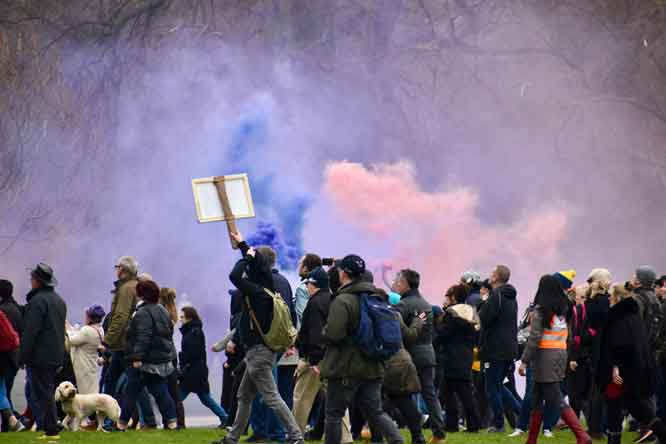 Virtually from the moment a draft opinion by Supreme Court Justice Samuel Alito overruling Roe v. Wade and Planned Parenthood v. Casey was leaked last week, the Democratic left and its media allies have been incandescent with rage.

The progressive meltdown has been unhinged. There have been protests that turned violent , pro-life offices firebombed, predictions of a coast-to-coast ban on abortion, and warnings by journalists that the right to birth control and interracial marriage were now at risk. Abortion activists announced plans for a week of mass public protests, including demonstrations outside churches and "nationwide die-ins."

Naturally much of the furor has been targeted at the high court's six conservative justices. One group — calling on supporters to "rise up to force accountability using a diversity of tactics" — posted their addresses. Over the weekends, chanting crowds showed up outside the homes of Justices John Roberts and Brett Kavanaugh. Senator Ed Markey of Massachusetts, denouncing the "stolen, illegitimate, and far-right Supreme Court majority," renewed the call for court-packing legislation, while House Speaker Nancy Pelosi and Senate Majority Leader Chuck Schumer issued a statement blasting the court's conservative majority with having "ripped up the Constitution."

Of all the accusations hurled at Alito and the other justices expected to join in overruling Roe (and Casey), one that generate particular wrath is that they lied during their Senate confirmation hearings when they testified that the right to abortion was "settled" constitutional law and immune to being overturned.

In a TV interview, Representative Pramiya Jayapal, the Washington Democrat who chairs the Congressional Progressive Caucus, slammed the jurists for having "frankly lied under oath when they were testifying to Congress on this question." Schumer, speaking on the Senate floor, asserted that "these conservative justices, who are in no way accountable to the American people, have lied to the US Senate." On Twitter, the hashtag #LyingGOP trended. A video supercut prepared by MeidasTouch, a leftist political action committee, was posted on multiple social media platforms. It purported to prove that the justices had falsely promised not to do what the leaked Alito memo suggests they are prepared to do: overturn the Supreme Court's most important abortion precedents.

If my email is any indication, plenty of rank-and-file Democrats are indignant over the justices' supposed deception. One reader, in a message that was typical, advised me to "rewatch Justices Kavanaugh and Gorsuch lie to the Senate Judiciary Committee regarding their belief that Roe v. Wade [was] â€˜settled law'."

The confirmation videos certainly do make clear what Alito and the other judges said about Roe. None of them said it could not or should not be overruled.

When the subject came up, for example, during Neil Gorsuch's confirmation hearings in 2017 , he called Roe a "precedent of the US Supreme Court, worthy of treatment as precedent like any other." Having been "reaffirmed many times," Roe carried "considerable" weight, Gorsuch explained. All the same, he added, "there are instances when a court may appropriately overrule precedent after considering a lot of factors." Like all Supreme Court nominees, Gorsuch stuck to truisms. But he made no promises about how he was likely to rule in any controversial case. In response to a question from Senator Lindsey Graham, Gorsuch said that President Trump had not asked him to overturn Roe.

Graham pressed him: "What would you have done if he had asked?"

"Senator," Gorsuch replied, "I would have walked out the door."

A year later, during Brett Kavanaugh's confirmation hearings, he said more or less the same thing. When Senator Dianne Feinstein leaned on him to clarify his views on "whether Roe is settled precedent or could be overturned," he answered, in essence: both.

On the one hand, he acknowledged, Roe "is settled as a precedent of the Supreme Court, entitled to respect under principles of stare decisis." But he also said that he could not guarantee in advance to uphold any precedent. "I listen to all arguments," he said. "You have an open mind. You get the briefs and arguments. And some arguments are better than others. Precedent is critically important. It is the foundation of our system. But you listen to all arguments."

When Amy Coney Barrett appeared before the Senate Judiciary Committee in 2020, she too refused to make any commitment to uphold Roe or any other disputed judicial precedent.

Barrett had discussed the concept of a Supreme Court "superprecedent," which she defined as "precedent that is so well established that it would be unthinkable that it would ever be overruled." Senator Amy Klobuchar asked whether Roe fell into that category. Replied Barrett: "I'm answering a lot of questions about Roe, which I think indicates that Roe doesn't fall in that category. . . . [I]t doesn't fall in the small handful of cases like Marbury v. Madison and Brown v. Board that no one questions anymore."

Supporters of an unfettered right to abortion have every right to be upset at the prospect of Roe's fall. But the claim that Trump's nominees lied to the Senate about how they would rule if a case challenging Roe came before the court is itself a lie.

In a lengthy post on Thursday, Snopes, the well-known (and by no means conservative) fact-check website, examined the MeidasTouch video and its claim that the conservative justices "dishonestly suggested, in Senate confirmation hearings, that they thought Roe v. Wade was beyond overturning." Snopes's verdict: False.


First, [the creators of the video] engaged in highly selective editing of much longer and more nuanced archival clips of future justices during their US Senate confirmation hearings, in order to grossly misrepresent the substance of what they said.

Second, they appeared to misunderstand or misrepresent the meaning of a Supreme Court precedent. In brief, describing a ruling as an important precedent is not tantamount to giving a commitment not to overturn that ruling, or indicating you believe that ruling cannot be overruled. Therefore, the sweeping allegations of premeditated dishonesty on the part of GOP-appointed justices were as poorly supported by evidence as they were wrongheaded.


So, no, the conservative justices didn't lie and it is slanderous to claim they did. That said, I am sympathetic to the argument that Supreme Court nominees dodge entirely too many questions during their confirmation hearings.

For years I have maintained that senators should refuse to confirm nominees who won't give clear answers to reasonable inquiries about their judicial philosophy and how they would approach various legal controversies. When John Roberts appeared before the Judiciary Committee in 2005, he — like all Supreme Court nominees in the modern era — bobbed and weaved and filibustered and daintily insisted that he could not answer any questions about subjects he might face if he were confirmed.

"Look, it's kind of interesting, this Kabuki dance we have in these hearings here," fumed then-Senator Joe Biden, "as if the public doesn't have a right to know what you think about fundamental issues facing them. There's no . . . possibility that any one of us here would be elected to the United States Senate without expressing broadly and sometimes specifically to our public what it is we believe."

Biden was right to be frustrated, as I wrote at the time:


As chief justice, Roberts is likely to have more of an impact on American law and life than any of the senators voting on his nomination. From the power of presidents to hold terror suspects indefinitely to the power of Congress to override state law, from the execution of murderers to the recognition of same-sex marriage, from affirmative action to abortion, Roberts and his fellow justices will shape national policy for years to come. Their decisions will be binding not only on the litigants before them, but also, by longstanding tradition, on the other branches of government. There is no appeal from a Supreme Court ruling. When the court strikes down federal and state laws, federal and state lawmakers must accept its decisions.

There is little in the Constitution to check and balance such immense authority. All that can keep the court answerable in some way to the electorate is the fact that the political branches give them their jobs -- the president appoints federal judges; the Senate confirms them. While delinquent judges can be impeached and removed, there hasn't been a Supreme Court impeachment in 200 years.

So the modest leverage of the nomination process is all we've got to remind the justices that they are public servants who must answer, however indirectly, to the people, not philosopher-kings to whom the people must bow. But if nominees are permitted to keep their views to themselves, how can the people decide whether they want them on the bench? For all the recent talk about the importance of judicial "modesty," Supreme Court justices have been anything but modest in imposing their views on society. Shouldn't we know what those views are before investing them with such power?


My view on this is nonpartisan: I maintained that Roberts should be made to properly answer senators' questions and I reiterated the argument when Elena Kagan, Gorsuch, and Kavanaugh were nominated. To date, however, no senators have been willing to condition their vote to confirm on getting clear answers during the hearings.

Well, so be it. Every Supreme Court nominee for the last 30 years has primly refused to express their views on subjects everyone knows they have strong opinions on, the constitutional integrity of Roe v. Wade being a classic example. Trump's nominees were asked about Roe and they answered with noncommittal boilerplate. Such answers are neither satisfying nor illuminating. But they certainly aren't promises and it's a lie to call them lies. =