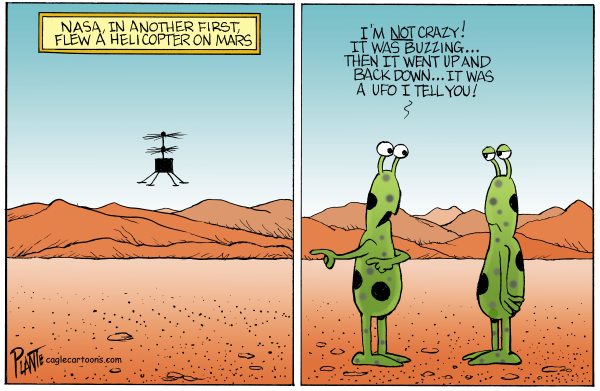 It took seven months and an expedition of 293 million miles for NASA's Ingenuity helicopter to get to Mars. The tiny drone hitched a ride aboard the six-wheeled Perseverance rover, which weighs more than a ton and is crammed with some of the most advanced electronics and engineering America's rocket scientists have ever developed.

Then NASA had to revise and re-install Ingenuity's flight control software ā€” no small achievement considering that the corrected code had to be uploaded from 175 million miles away.

But that was nothing compared with what came next.

On Monday, its two delicate rotors spinning in opposite directions at an astonishing 2,400 RPM, Ingenuity rose 10 feet above the Martian surface, made a quarter turn, hovered for 30 seconds, and came back down.

Those 30 seconds changed history. For the first time, an aircraft took flight on another planet. Another planet! It may have been one very small jump for a chopper, but it was one giant leap for mankind.

NASA's engineers had to wait more than three hours to find out if the flight had succeeded. When confirmation came ā€” in the form of a video taken by Perseverance ā€” they were jubilant.

"This really is a Wright Brothers moment," exulted Steve Jurczyk, NASA's acting administrator. Indeed it was, and affixed below Ingenuity's rotors was a physical tribute to Orville and Wilbur Wright's historic 1903 flight above the beach near Kitty Hawk, N.C.: a stamp-sized piece of wing fabric from their original "air machine," Flyer 1. In another bow to the two pioneering bicycle makers who ushered in the Age of Airplanes, the site of Ingenuity's first Martian flight was renamed Wright Brothers Field.

"We don't know from history what Orville and Wilbur did after their first successful flight," Ingenuity's program manager, MiMi Aung, told her COVID-masked colleagues in the control room. "But I imagine the two brothers hugged each other. Well, you know, I'm hugging you virtually."

Actually, we do know what the two brothers did after that first-ever flight, which last just 12 seconds and covered 120 feet: They fixed a lever that had broken and replaced a cracked skid under the rudder, and then, just 45 minutes after their first takeoff, went up a second time, and then a third. On their fourth and final flight that morning, Flyer 1 traveled 852 feet and stayed aloft for just under a minute. By that point, Orville Wright recorded in his diary, "the front rudder frame was badly broken up." The brothers then walked four miles to the nearest Western Union office and sent a telegram to their father:

Like Flyer 1, Ingenuity is expected to make more flights, each venturing a little higher, farther, or longer than the last. The little drone successfully flew a second time on Thursday, but at some point it will probably be pushed beyond its limit and be unable to land safely. Within a few weeks, Ingenuity may well be reduced to chunks of hardware on the dusty Martian plain. It won't be flying again and it isn't coming home. But other aircraft will follow. Air travel on Mars has only just begun.


Sooner than we imagine, Ingenuity ā€” currently the most expensive and sophisticated rotorcraft ever designed ā€” will be regarded with fondness as a primitive relic of extraterrestrial aviation. It took just 24 years, remember, to get from Kitty Hawk to the first solo nonstop flight across an ocean. A mere 65 years after Orville Wright wired "Success," Neil Armstrong radioed to Houston: "The Eagle has landed." Ingenuity has thrown open the door to marvels of flight and exploration that we can barely imagine, but that our children or grandchildren will take for granted.

Mars has been an extremely tough nut to crack.

Attempts to land on the Red Planet failed time and time again. And having finally figured out how to touch down safely, NASA faced a daunting new challenge: how to lift off from the planet's surface. The atmosphere on Mars is 99 percent less dense than Earth's, making it exceptionally difficult for a helicopter's rotor blades to generate the lift needed to get airborne. Ingenuity had to be kept exceedingly light ā€” the whole craft weighs less than 4 pounds.

Its blades needed to be all but weightless (2 ounces each), yet strong enough to spin five times faster than any helicopter blades on earth. The engineering problems were unprecedented. NASA solved them.

This has not been a happy time in our history. The past year has brought so much distress, pain, and anger ā€” a deadly pandemic, months of racial unrest, a toxic election campaign, a violent assault on the Capitol, mass shootings. Most Americans are convinced that their country is headed in the wrong direction. Amid the gloom, Ingenuity's achievement is a beam of beautiful brightness, and an uplifting reminder of what the human mind is capable of.

It is also a reminder of the wonders made possible by America's unique culture of E Pluribus Unum.

In a recent interview with the Wall Street Journal, Vandi Verma, an immigrant from India who is now chief engineer of robotic operations for NASA's Mars rover project, described her adopted homeland as "a country of explorers." So many Americans, she marveled, "just have this urge to push the boundaries." We are blessed with a disproportionate share of such people, because so many of our countrymen are Americans by choice, not birth. Among Verma's colleagues at NASA are immigrants from nearly a dozen countries: Greece, Russia, India, Costa Rica, Cambodia, Mexico, Argentina, France, Italy, the UK, Colombia.

How aptly named is that tiny little chopper! When Americans combine ingenuity with unity, there is no telling how far they can go. For now, the Martian sky is the limit. It won't be for long.