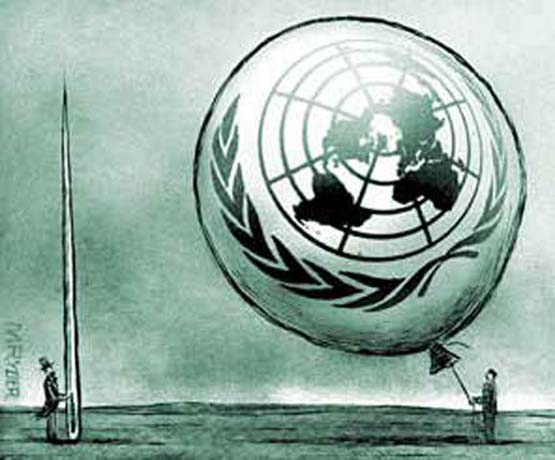 In a major diplomatic slap, the United Nations General Assembly voted on Thursday to suspend Russia, one of the UN's founding members, from its Human Rights Council. The vote was 93-24, which easily surpassed the two-thirds majority required for the resolution to be adopted and made Russia only the second country to be stripped of its membership on the council. The first was Libya in 2011.

The rebuke to Vladimir Putin's murderous regime in the General Assembly was entirely deserved — an admirable display of moral clarity in a venue where such displays are few and far between. The vote to suspend Russia was an expression of the worldwide outrage over its genocidal war crimes in Ukraine. But it was also a one-off. It does not change the fact that the Human Rights Council has routinely made a mockery of its mission, which is to promote "universal respect for the protection of all human rights and fundamental freedoms." The Kremlin's representative is leaving — good riddance — but the Human Rights Council remains a monument to hypocrisy.

The drive to expel Russia was sponsored by the United States following the revelation of atrocities in Bucha and other towns on the outskirts of Kyiv. Hundreds of corpses, many of them civilians murdered at close range, were found strewn in the streets or buried in mass graves after Russian troops pulled back from the area. In the wake of Russia's appalling campaign of firing missiles at nonmilitary targets — hospitals, schools, apartment buildings, churches, theaters — the latest sickening images intensified the global outrage over Vladimir Putin's war. The United States, the G7, and the European Union imposed a new barrage of sanctions against the regime in Moscow. They also ramped up efforts to curtail Russia's standing at the United Nations.

On Monday, the US ambassador to the UN, Linda Thomas-Greenfield, said it was "a farce" for Russia to be sitting on the Human Rights Council and called on the General Assembly to remove Moscow's representative. Three days later, it was done.

No one should be under any illusions, however. Even with Russia gone, the Human Rights Council continues to be, as it has been all along, a club dominated by autocrats and dictators far more interested in whitewashing human rights abuse than in confronting it. Of the council's 47 members, only 15 are free societies where political rights and civil liberties are broadly protected. The others, more than two-thirds, are rated "not free" or only "partly free" by Freedom House, the respected human rights watchdog. Among the countries that currently sit on the panel are some of the most tyrannical on the planet, including Eritrea, Somalia, Cuba, Sudan, Mauritania, and China. Even Libya is once again a member; it was reinstated by the General Assembly eight months after its suspension.

The Human Rights Council is not supposed to resemble the General Assembly, which is open to every nation regardless of how it is governed. Under UN rules, members must be elected to the council, and membership is supposed to be restricted to countries that can be trusted to "uphold the highest standards in the promotion and protection of human rights." Yet no more than a modest fraction of the council has ever met that standard. The world's most repugnant and repressive governments have all, at various times, been members in good standing.

Among those pressing for Moscow's suspension was Hillel Neuer, the director of the Geneva-based nongovernmental organization UN Watch. "Every day that Russia sits on the world's highest human rights body while slaughtering innocent civilians in Ukraine is an outrage," Neuer told the New York Sun.

True enough. But is it any less of an outrage for Mauritania — a nation in which chattel slavery is still widely practiced — to be a voting member of the Human Rights Council? Or Sudan, where arbitrary killings, cruel and inhuman treatment of prisoners, and rape and torture by government security forces are widespread? Or Cuba, whose people suffer under the oldest dictatorship in the Western Hemisphere? Or China, where religious and ethnic minorities are forced into slave labor and imprisoned by the millions in concentration camps?

Russia's membership has indeed been an outrage. It has also been typical of how the Human Rights Council operates. "The whole system," Neuer acknowledged, "is built on turning a blind eye to human rights violations."

Time and again, the Human Rights Council, like the UN system of which it is a part, has ignored the grossest abuses of civil liberties and political rights. During China's violent crackdown on democracy in Hong Kong in 2020, council members by a 2-1 ratio issued statements of support for the "national security" law that was Beijing's vehicle for repression. Three months ago, during a review of human rights practices in Syria, a majority of the delegates issued statements praising the homicidal regime of Bashar al-Assad. On the other hand, the council has been obsessed with Israel, a largely free and democratic society, which it has condemned in scores of resolutions — far more than any other country.

With or without Russia, the Human Rights Council is no friend of human rights and never has been. If the United States and its democratic allies truly wish to advance the cause of dignity and freedom around the world, they ought to withdraw from the council and refuse to subsidize it. There is no excuse for continuing to pretend that a panel dominated by authoritarians and tyrants can be a champion of human rights. If Libya's example is any guide, Russia will be back on the Human Rights Council before long. All the more reason for America and the few other council members that share its values to walk away, and to take the fight for human rights to a venue where dictators don't call the shots.