The problem with Holocaust education 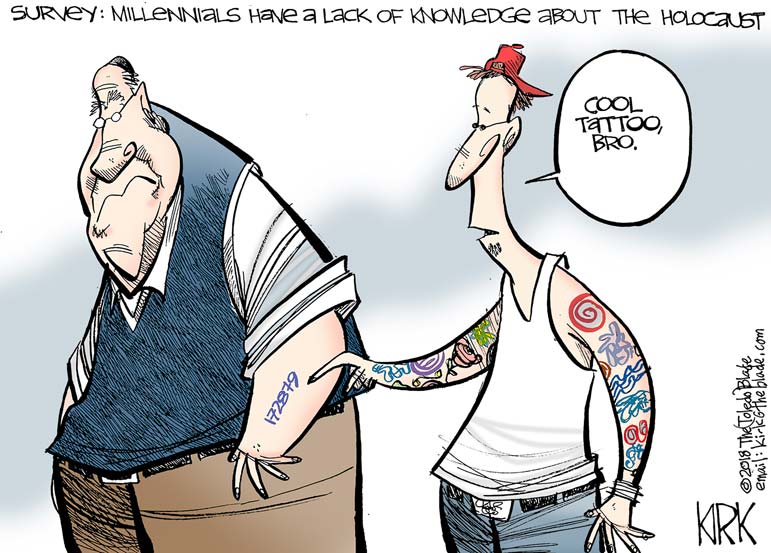 Last September, the Conference on Jewish Material Claims Against Germany — an international organization that provides financial support and social services to survivors of the Nazi genocide — reported on a study of basic Holocaust knowledge among Americans younger than 40.

The study comprised interviews with 11,000 millennial and Generation Z respondents, who were asked 30 questions designed to measure their threshold awareness of the Holocaust.

Instruction about the Holocaust has proliferated in American classrooms in recent decades. Units on the subject are taught in countless schools, and mandated by law in 17 states. Holocaust education has been obligatory in New York since 1994 for all students over the age of 8. In Florida, which also mandated the teaching of the Holocaust in 1994, instruction begins in kindergarten.

Despite all this education, what the Claims Conference survey revealed was "a worrying lack of basic Holocaust knowledge." Sixty-three percent of millennials and Gen Z-ers did not know that 6 million Jews were murdered by Nazi Germany. When asked if they could name any of the more than 40,000 concentration camps, ghettos, or extermination sites into which Jews were forced, 48 percent were unable to identify even one. More than 1 in 5 (22 percent) could not be sure that they "have definitely heard about the Holocaust."

Holocaust education may have grown pervasive, but Holocaust ignorance remains as widespread as ever.

Whether despite that failure or because of it, the push to make Holocaust instruction compulsory isn't letting up.

A proposed Genocide Education Act on Beacon Hill would require students in all Massachusetts public schools to engage in "the study of the inhumanity of genocide," and to learn that "national, ethnic, racial, or religious hatred can overtake any nation or society, leading to calamitous consequences." Lawmakers in Arkansas have introduced a Holocaust education bill that would emphasize the "ramifications of bullying, bigotry, stereotyping, and discrimination."

A bill working its way through the Arizona legislature would make Holocaust and genocide education a statutory requirement, "so that when students see bigotry," to quote the president of the Phoenix Holocaust Association, "they will understand what those ramifications could be down the road."

In February, Utah's governor signed a measure declaring it "essential to provide students with knowledge of the Holocaust and other genocides to help them . . . root out despicable acts of hatred, anti-Semitism, and other forms of prejudice." Notice the pattern: In every case, the reason for requiring Holocaust education is to sensitize students to the evils of bigotry, intolerance, and oppression. The goal is not to make clear the distinctively virulent and destructive poison of anti-Semitism, an enmity older than and different from any other in human history.

Students are not taught to recognize the singular and protean nature of Jew-hatred, or to understand how the persecution of Jews is invariably a sign of deep-rooted sickness in any society. They never learn to connect Hitler's rise to power with Europe's 2,000-year history of persecuting, scapegoating, expelling, and killing Jews. Instead of focusing on what made the Final Solution unique, students learn to see it as part of the universal human problem of bias, cruelty, and racism.

No one doubts the good intentions of educators and lawmakers who have made Holocaust education mandatory. For me, as one whose own family was deeply scarred by the Nazi horror, Holocaust awareness has always been an ineradicable moral imperative. But it is time to acknowledge the uncomfortable truth: Holocaust education isn't working.


It is bad enough that so many millennials and Gen Z-ers — and even some educators — still know so little about Nazi Germany's industrial-scale murder of 6 million Jews. Worse by far is that a generation of Holocaust classes has apparently done nothing to stem the rise of anti-Jewish hatred.

"In reality," wrote Ruth Wisse in a recent essay in National Affairs, "anti-Semitism in the United States has spread in tandem with increased teaching about the Holocaust." In America as in Europe, hostility toward Jews has been rising steadily. Anti-Semitism seethes on both the left and the right, and reported hate crimes against Jews have reached record levels. A majority of US Jews say they feel less safe than they used to. Even in schools with Holocaust-focused courses, anti-Jewish nastiness can be all too visible.

In Duxbury last month, the high school football coach was fired for having his team call out words like "rabbi" and "Auschwitz" on the field to direct game plays.

Today is Yom Hashoah, the annual Holocaust Remembrance Day designated by Israel's parliament in 1951. It will be commemorated with ceremonies and speeches, moments of silence, and testimonials. Never has the Holocaust been so earnestly and widely "taught." Yet never has it been so clear that its lessons are unlearned. The cancer of anti-Semitism is spreading, and there is no deadlier symptom of failure.