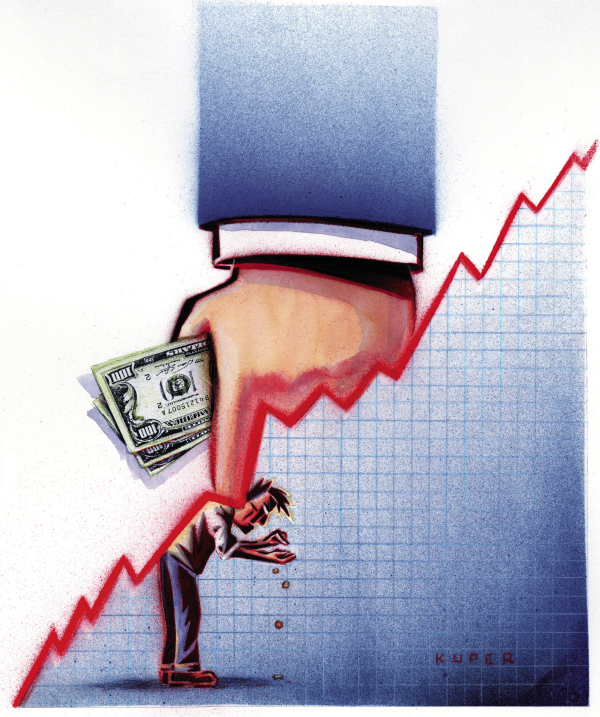 Consumer prices rose 7.9 percent during the 12 months from February 2021 to February 2022, according to the federal government's Bureau of Labor Statistics. Increasingly expensive gasoline, housing, and food contributed the most to the spike, but the price of just about everything is going up. Americans are experiencing the steepest inflation rate in more than 40 years, and there is little reason to believe that the surge in prices won't get worse before it gets better.

If you lived through the 1970s … "that slum of a decade," in Michael Barone's exquisite phrase … you may remember what it was like when inflation really did keep getting worse before it got better. That was the era when prices rose by double-digit percentages, when President Gerald Ford labeled inflation "Public Enemy Number One," and when Washington launched a Whip Inflation Now campaign to restrain prices through frugal shopping and the wearing of lapel buttons. (It didn't work.) In How We Got Here , his vivid history of the 1970s, David Frum notes that in just the three years from 1972 to 1975, "the median price of a new home in the United States jumped by nearly 50 percent." Continues Frum:

Worse than the rise in housing prices was the rise in interest rates. Baby boomers who had grown up in homes financed at 4.5 percent were by 1975 facing mortgage rates that had passed 9 percent. In 1950, seven out of 10 American families could afford the monthly payments on a median-priced new home; by the end of 1975, only about four of 10 families could.

Working Americans were also being squeezed by surging prices of food, clothing, and fuel. The cost of meat, poultry, and fish rose by more than 40 percent between August 1972 and August 1973, so fast that steakhouse menus arrived with stacks of little white handwritten stickers over their printed prices. I remember being taken out to dinner as a boy of 12 and scraping off a little mountain of superimposed surcharges to gaze at the primordial price at the very bottom. I felt like Heinrich Schliemann, digging through the fragments of forgotten centuries to gaze at a lost world, where a ribeye with baked potato at a restaurant with red-leather banquettes cost $5.95. . . .

Price hikes weren't the only way that manufacturers and merchants dealt with the shrinking purchasing power of the dollar. The 1970s saw a wave of product downsizing, or "shrinkflation," as it eventually came to be known. Rather than raise the price for a given quantity of some product, many vendors kept prices unchanged but reduced the quantity of what they were selling.

"In late summer of 1974, for example, Woolworth's offered a packet of pencils at its back-to-school sale for 99 cents â€“ same price as the previous year," writes Stephen Mihm , a professor of history at the University of Georgia. "But . . . the packages only contained 24 pencils, six fewer than the previous year." Some examples of shrinkflation from that era were truly egregious. Gumball makers, unable to reduce the overall size of the gumballs sold through mechanical dispensers, managed to downsize them all the same through the expedient of making them with hollow centers. Cans of Brim decaffeinated coffee didn't get any smaller, yet they contained 11.5 percent less coffee after the company devised a way to expand the volume of the contents by "puffing" them with air.

The phenomenon never went away, of course. When, as a law student in Boston, I first began shopping regularly for groceries, yogurt was sold in 8 oz. cups. By the turn of the millennium, when I had become a father, the standard size had dropped to 6 ounces. In grocery stores today, yogurt comes in 5.3 oz containers. Countless other products have shrunk as well, from cartons of ice cream to cake mixes to toilet paper to deodorant. Oh, and newspapers, too.

He gets no argument on that score from Victor Davis Hanson, a conservative historian at the Hoover Institution, who wrote movingly in a recent essay about the misery that inflation inflicts:

[I]nflation is an equal-opportunity destroyer of dreams. It undermines rich and poor, Democrats and Republicans, conservatives and liberals. It unites all tribes, all ideologies, all politics against those who are perceived to have birthed the monstrous octopus that squeezes everything and everyone it touches.

The prospective Republican home buyer sees his hard-earned potential down payment eaten away each month. The Democratic carpenter feels his new higher wages buy even less. . . .

[I]nflation is ubiquitous, inescapable, omnipotent … and humiliating. It destroys personal dignity. . . . [I]t cannot be avoided for a day. You cannot tune it out. . . . Inflation attacks everyone in 24/7, 360-degree fashion.

Inflation in this country was crushed into submission in the 1980s. For nearly four decades it remained so low that it ceased to have importance as a political phenomenon. Now it has broken loose. The president and his advisers for too long denied that inflation was real , and now seem clueless about how to rein it in. They don't have much time to figure it out. Elections are less than nine months away.

Still, as inflation over the past 15 months has surged to levels not seen in more than a generation, so has the rate at which manufacturers have resorted to shrinking their products in order not to have to raise prices. To add insult to injury, some of them claim that in giving customers less for their money, they're actually giving them more.

"Gatorade … the sports drink brand of PepsiCo … recently replaced its 32 oz. size with a 28 oz. bottle for the same price. That's the equivalent of a 14 percent price increase," reported Quartz this month. But to hear PepsiCo tell it, this is good news for consumers.

"Basically we redesigned the bottle, it's more aerodynamic and it's easier to grab," a company spokesperson told Quartz. "The redesign generates a new cost and the bottles are a little bit more expensive . . . this is only a matter of design." But do customers prefer the new shape enough to relinquish one-eighth of the quantity they were used to? Quartz posed the question, but "Gatorade did not respond."

Frito-Lay recently reduced its large bag of Doritos from 9.75 ounces to 9.25 ounces. To consumers, that means five fewer chips per bag. To the company, it means an estimated savings of 21 cents per bag. Multiply 21 cents by the tens of millions of bags of Doritos sold each year, and it's apparent that the half-ounce reduction amounts to a transfer of millions of dollars to the company from its customers. Yet Frito-Lay claims to be doing shoppers a favor. "We took just a little bit out of the bag," a spokesperson said blithely, "so we can give you the same price and you can keep enjoying your chips."

To be clear, none of this is illegal. Arguably it's not even unethical. Packages are required by law to display the net weight or quantity of the product being sold, so customers who check labels carefully will always know what they're getting. Still … how many of us focus carefully on the fine print of a product we've been buying for years? When the price doesn't appear to change, how likely are we to realize that we're getting less for our money? Inflation is inflation, whether it takes the form of a higher price or a smaller product size (or skimpier service). In every case, consumers are getting less for the dollars they spend. But only overt price hikes are reflected in the government's inflation statistics. Which means that those statistics, disturbing as they have been lately, are actually understating the inflation that Americans are experiencing. The true cost of living is rising faster than the official inflation numbers indicate.

Americans too young to remember the 1970s may not grasp how hated inflation can become, or how it can decimate the political welfare of the party in power. Jimmy Carter was turned out of office after one term in part because inflation was wreaking havoc on Americans' lives. "Is it easier for you to go and buy things in the stores than it was four years ago?" Ronald Reagan asked in the closing days of the 1980 presidential campaign. The answer was obvious to everyone … and it proved devastating to the incumbent and his party.

Barring something unexpected, the return of inflation to American life in the 2020s is likely to be similarly devastating to the political prospects of Joe Biden and his party. In a recent CBS/YouGov survey , 58 percent of respondents said that Biden wasn't focusing enough on the economy generally. An even higher share, 65 percent, said that about inflation in particular. Such views lead political analyst William A. Galston, a lifelong Democrat, to call inflation "President Biden's biggest political problem."